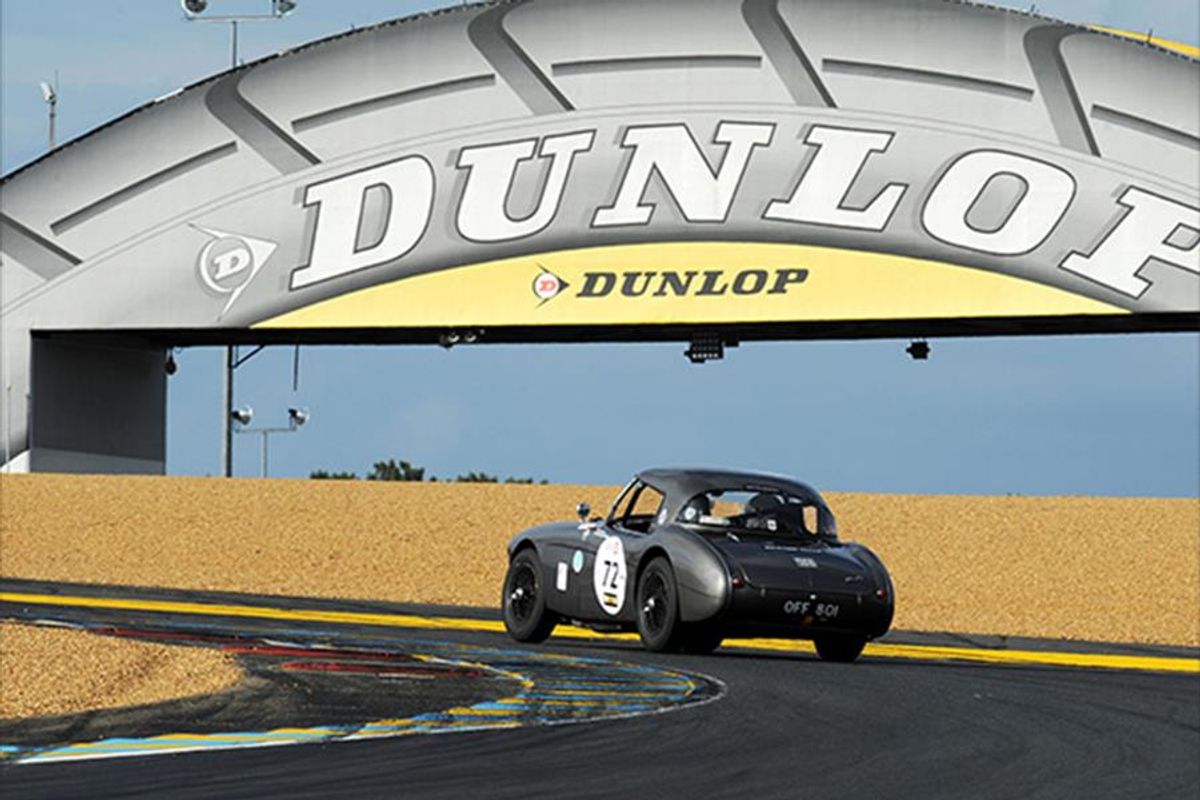 The prestigious 'Le Mans Classic' event, held every other year, allows drivers to race on the full 8.5 mile road endurance circuit with classic cars from 1923 to 1979 Sports LM racers. The cars are divided into decades across grids and whilst the racing action is non–stop for 24hrs, each grid or plateau has 3 x 45 minute races plus day and night qualifying with a pit stop. Sarah and Mike shared the drive in their JME Healeys prepared car supported by Adrian Flux Insurance.

In the huge 78 car grid, the Healey was up against champion pro-driver Alex Buncombe at the wheel of his C-Type Jaguar who drove to clear victory in the first two heats. The duo finished a respectable 13th in Heat 1 and when the night session came at 3am so did the rain… that’s when the Healey started to climb the rankings as the slippery track claimed a number of victims and drivers began to slow down in the treacherous conditions. Finishing 8th overall with Mike having secured the fastest time in the night, the Healey was placed 4th on the grid for the third and final heat on Sunday morning, bang in the middle of the powerful multi million pound C-type and D-types Jaguars, a brace of brutish Mercedes Gullwings. This was going to be some battle!

As the cars lined up for the start, the heavens opened and rain fell biblically, causing the race to be started under safety car conditions. After two painfully slow rain- drenched laps Sarah pitted cleverly to hand over to Mike, who exited the pit lane just ahead of race leader Alex Buncombe in his Type-C Jaguar. Mike quickly climbed the field to 8th position and as the rest of the field came into the pits for driver changes, moved up into 3rd position just 2 laps from the end, putting in the fastest sector times on the circuit. On the penultimate lap the leading car of Alex Buncombe hit a rival at Arnage and was sidelined, moving the Healey up into second position. Confusion by the race officials looking for the leader meant the race continued for one more lap. In that extra lap Mike overtook Monteverde again in his D-Type Jaguar to take the chequered flag as the winner. Only later did the position get rewound a lap by the timekeepers to 2nd place. Regardless, the final race result gave the duo enough of a lead to beat favourites like Gavin Pickering (winner in 2012) and Monteverde, both in competition D-Type Jaguars, and the duo Mulder-Simon in their Mercedes 300 SL, which suffered mechanical issues.

The final overall results after all three heats gave the Finburgh-Newall team overall victory in their Jaguar C-Type.

Mike Thorne commented "Never in our wildest dreams did we think we would stand on the podium at Le Mans, but the wet weather really levelled it out against the much more powerful cars in the grid, and thanks to the JME Healey team who worked so hard to give us a good car, and to a solid wet weather driving performance , we proved that anyone can do it.. even us littl'uns! Actually, I had no idea what all the excitement was until I got back to the paddock – I thought we were 8th at the time; in all the rain it was impossible to see the pit board- I thought they were puling my leg when they said we had won!”

Sarah Bennett-Baggs "The weekend was not all plain sailing, we had some problems with the car in qualifying and the team worked really long hours to sort them out, the circuit is incredibly difficult to learn in the short qualifying sessions but Mike drove like a demon in the torrential rain on Sunday and all I had to do was keep it on the black stuff in the early laps. For me the image of driving down the Mulsanne straight in the dark at night with all those super fast race cars will stay with me forever, it has been awesome."

This Le Mans podium rounds off three podiums in as many races for the JME team who will next be out at Silverstone Classic before heading to Spa for the 6 Hour endurance race.