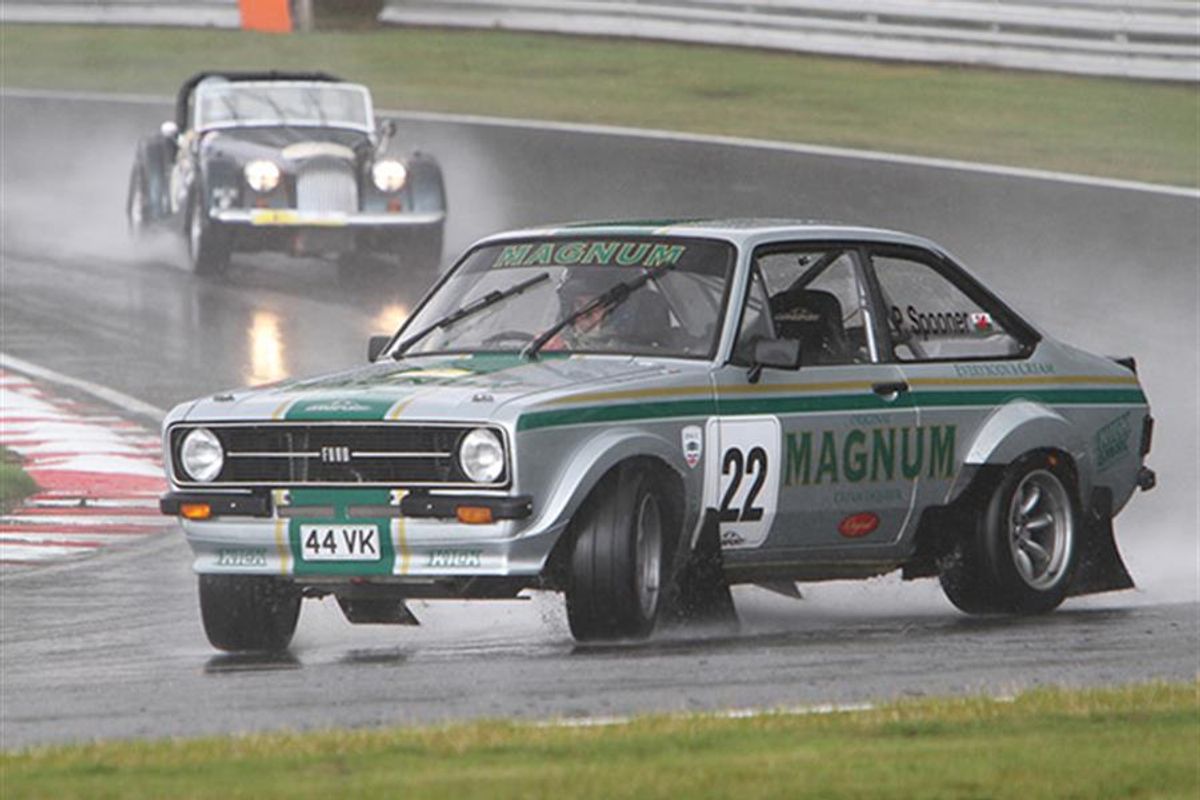 After one of the closest lead battles in the event’s 10-year history, Phil Hindley and Andy Bull claimed a hard-earned victory on Tour Britannia (6-8 August) to maintain their unbeaten record on Britain’s only classic race and rally tour.The result completed a hat-trick of Tour Britannia wins for Hindley’s Porsche 911 SCR, but it took a mighty attack on the final day before Hindley could get ahead of the Ford Escort Mk2 of Steve Perez and Paul Spooner.John Sheldon, partnered by his wife Lesley in their Lotus Elan, took the early advantage as a torrential rain storm hit Oulton Park on Wednesday afternoon when the cars were on the grid for the first of the event’s three races. While Hindley struggled with the wrong tyres for the conditions, Sheldon romped away to score an impressive win. Sheldon took an early overall lead of just two seconds as Hindley’s pace on the two short special stages at Oulton Park mitigated the time lost in the race. “The tyres were perfect: they just worked in the conditions,” said Sheldon.The pace at the front of the tour was tremendous on Thursday, a day of spectacular stages, warm sunshine and sporting competition across North Wales. As the crews arrived back in Tarporley at the end of the leg, Perez led Hindley by just five seconds.It was on the sensational Great Orme special stage that rally driver Perez pressed home the advantage of prior knowledge and he took 26s profit from Hindley over the pair of stages. However, in the race at Anglesey, Hindley quickly took the lead and went clear to pull back 10s on Perez, who finished third after a long tussle with Sheldon.Hindley then won the third and final race at Anglesey on Friday morning to level the times. But it was over the long airfield stages at Llanbedr on Friday afternoon that Hindley really pressed home the Porsche’s advantage to build a 20-second lead going into the final two stages at Mostyn Hall. Perez attacked once more and pegged the final margin back to just 13s.“The car’s for sale so I thought I’d bring it back out again,” said Hindley. “The Great Orme stage was an amazing experience: I’d never done it before.” Perez was one of the stars of the event as he made his racing debut. With engine issues for his Lancia Stratos, Perez borrowed the Escort Mk2 rally car of his friend Geoff Bell and turned in a great performance, including in the races. “I really enjoyed the races and I could be tempted to do some more!”A tremendous battle raged for third overall and was only settled as three seconds covered three crews after the deciding pair of stages. Steven Ratcliffe/Chris King (Porsche 911) took the place by a single second from Tony Robinson/Keith Fellowes (Porsche 911) and John and Lesley Sheldon (Lotus Elan). Out of contention with a blown diff went the Elan of Jeremy Cooke and Mike Dowd.In the concurrent regularity event, Max Taylor/Mike Hickson turned in a near-faultless performance in their Aston Martin DB2/4 to lead from the start and run out commanding winners over Derek and Sue Skinner (Porsche 356) and Andrew Brodie/Richard Payne (Citroen SM).