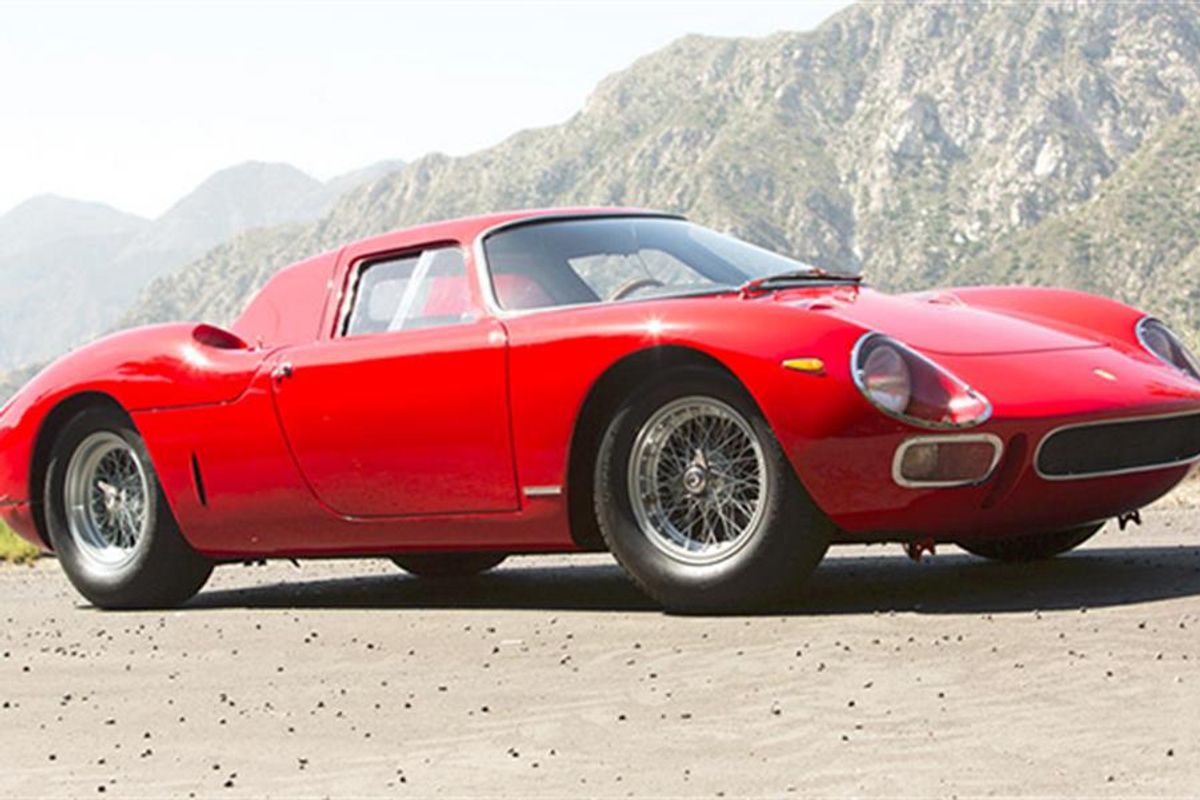 A good result by RM Auctions for this car - vindicating the work which went to re-unite all the original components.

67 cars sold by RM on the first of 2 days - good appetite and strong bidding means that dealers round the world holding stock will breath a sigh of relief against continual chatter that this is top of the market/market correction due etc.

Chassis 6045 was the nineteenth example of the thirty-two 250 LMs produced, according to noted Ferrari historian and 250 LM authority Marcel Massini. As such, it was assembled by the factory over the course of the summer of 1964, and it left, finished in Rosso Cina with Bleu-trimmed fabric seats, and bound for the United States. After crossing the Atlantic and arriving at Luigi Chinetti Motors in Greenwich, Connecticut, it was sold to Bill Harrah’s Modern Classic Motors in Reno, Nevada, for a price of $21,250. Even though Modern Classic Motors was an official dealership, this car would not be immediately sold, and it was instead used as a street car by Harrah himself, who kept the car until April 1966. Harrah had a fabulous collection of all types of cars, from classics to contemporaries, but there’s no doubt that a brand-new 250 LM would have been the most eye-catching vehicle on the streets of Reno.

Around 1966, it was sold through Cris Vandagriff, of Hollywood Sport Cars, to its second owner, Dr. Hart Isaacs, of Beverly Hills, California, for $17,500. At that time, it was noted that the car had only accrued 800 miles, which was a fair amount for this particular car considering Harrah had access to many cars at the time. Isaacs went on to use the car much like Harrah, and he registered it for road use. Over the next few years, he had the car serviced by Sal di Natale’s S & A Italia Sports Car Specialists in Hollywood, and it was fitted with a pair of external rearview mirrors. In May 1969, Isaacs showed the car at the 19th annual Pebble Beach Concours d’Elegance, where the car was awarded Second in Class in the Special Interest Cars class.

However, misfortune struck 6045 less than a month after its showing at Pebble Beach. In June 1969, Isaacs had an accident in the car while driving on Sunset Boulevard in Hollywood following another concours event, and the resulting damage caused the left-side fuel tank to be punctured. Due to gasoline leaking from the puncture, the car caught on fire shortly thereafter, and the delicate, thin-gauge aluminum body was badly burnt.

Disheartened by the accident, Isaacs parted ways with the car, and it was sold to Donald D. Simpson, an automobile dealer based in Bellflower, California, in unrepaired condition. The following year, Simpson made a cine film of the car, and it was evident that the chassis damage was around the passenger-side fuel tank only. It was also evident that the damage to the rest of the car did not extend beyond superficial, that the brakes, suspension, steering, and interior were largely undamaged and intact, and that the car was still rolling. The lightweight aluminum body had simply melted onto the frame of the car. Simpson intended to restore the car and race it. However, he finally decided against it and listed the car for sale in 1971. The car was later purchased by Ron Kellogg in 1972, and at this time, the original engine was removed and sold it to Stuart H. Baumgard for use in his 250 GTO, chassis 3987 GT.

One year later, Kellogg advertised 6045 for sale, and it was purchased by Dr. Hamilton Kelly, who also owned 250 LM chassis 6023. Kelly only collected a handful of its parts from Kellogg and then left the car for some time in Kellogg’s storage. Later, when Kelly sent someone to collect the car, a few minor chassis tubes from behind the rear engine mounts were separated in order for it to fit into a pickup truck for transport. These tubes, as well as the crucially all-important tube that had the chassis tag tacked onto it, were retained by Kellogg, along with those items of original bodywork that remained. It is most likely that Kellogg had previously cut out the chassis tag tube to ease the engine removal when it was sold to Baumgard.

From there, the car passed through noted Ferrari restorers Charlie Betz and Fred Peters before it travelled back to Italy, where it was brokered by Carlo Frosini and sold to the Ferrari Main dealer Giorgio Schon, who finally began the car’s restoration. At this time, some crucial photographs were taken by Schon of the chassis in a stripped state, and these clearly showed the damaged area of the frame from the accident and where the rear section had been shortened. It was clear that the chassis was original at the time, as it still showed evidence of the 1969 accident and fire damage. The 6045 number had been stamped on a front anti-roll bar mount in order to identify the frame at the time of import to Italy. To be sure, the chassis was later inspected by Florini Gaetano, the director of Ferrari Assistenza Clienti, and he confirmed that the chassis was indeed original. The chassis was subsequently sent to William Vaccari, whose facilities built the original 250 LM chassis frames for Ferrari when they were new. Vaccari also determined that the chassis was genuine, original, and correct. As part of the car’s restoration, Vaccari was then authorized to carry out the necessary repairs to get the car back to its proper factory specifications.

By 1988, 6045 was sold in partially restored condition once more, to Ulrich Guggisberg, who continued the restoration. He commissioned Bachelli-Villas Carrozzeria Auto Sport, of Bastiglia, Italy, to construct a new body, and the mechanical work was completed by Tony Franco, of Maranello. The restoration was completed four years later, and the car passed through several owners in Europe, the United States, and a large collection in Japan. The car was displayed and raced at the Palm Beach Cavallino Classic in 2000, and it passed through two more owners before it was purchased by its current owners in the United Kingdom in 2007.

In 2009, it was decided that the car should be fully restored in order to both display it at concours events and to campaign it in historic racing. DK Engineering carried out this restoration. During this time, it is important to note that the 6045 number was found stamped on the front steering rack mount on the chassis, confirming the chassis’ identity and that it was the same item that was imported to Italy in the early ’80s. DK Engineering repositioned the brake ducts at the front of the car’s bodywork, and the driving lights and their proper housings were fitted in order to bring the car in line with its original configuration. At this time, it was determined that the engine fitted to 6045, stamped 6045/2 at the time, was found to be a late 250 LM type or 250P type, based on the head stud length and configuration. The restoration was completed in 2010, and shortly thereafter, the car was shown at the Ferrari Owners’ Club of England’s annual meeting in July 2010. The car would also be raced at the Silverstone Classic and the Goodwood Revival that same year. The following year, the car was invited to race at the support race to the 24 Hours of Le Mans, and it was invited to attend the Syon Park Concours, currently known as Salon Privé, in London. In 2012, the car was driven by Octane magazine for a color feature in their July 2012 issue, and it also appeared in Auto Italia in May 2012.

Retracing the car’s history back to 1973 shows that Ron Kellogg sold the remaining damaged bodywork and other minor parts, including the chassis tube that had the identity tag fixed to it, to Richard Freshman following the sale of 6045 to Hamilton Kelly. Freshman had purchased 6045’s original engine from the owner of 250 GTO number 3987. During the 1990s, Freshman proceeded to build a replica 250 LM chassis in the United States, which he numbered 6045, as the all-new car was built around the original engine from 6045.

In order to acquire the original 6045 engine and any parts whatsoever that may have originated from 6045, the replica 250 LM that Freshman created was purchased by the current owners of the genuine chassis 6045 in 2011. This purchase was accompanied by the remains of the original body. Metallurgical tests were immediately undertaken in the presence of noted Ferrari historian Marcel Massini, and the results showed that no part of it whatsoever was consistent with the legitimate metallurgy that the chassis tubes of a 250 LM should be, with the exception of the vital tube that had the chassis number tag fixed to it. That particular tube was one of the items that had been supplied by Kellogg with the original body to Freshman. With this evidence, a case was put forward to the Classiche Department at Ferrari for the certification of the car, and as a result, the original engine was fitted to the genuine 6045, and together with the replica (as produced by Richard Freshman), it was sent to the Ferrari Classiche Department in Maranello. A full strip and inspection was set about by the Classiche Department, and during the certification process, the vital chassis number tube was removed from the replica and built back into the original car. Following this process, the replica was totally destroyed by the factory to ensure that only the original car would be identified as chassis 6045. It is important to note that the car retains as many of its original parts as possible, including its engine, chassis, suspension, and instruments, and it is even accompanied by the remains of its original body.

Once the engine had been deemed genuine, the Classiche Department reassembled the car and granted it full Red Book certification. The recently sourced original 6045 engine was fully rebuilt to correct factory specifications as well. While there, Ferrari also took the time to further improve the previously repaired damaged areas of the car’s chassis and bring it back to as-new condition. The restoration and rebuild was completed by Classiche in November 2013, and after 100 kilometers of testing, the car was deemed complete and was returned to its owners.

Just this year, 6045 made quite an impression back in its adopted home when it returned for the 13th Cavallino Classic in Palm Beach, Florida, in January. Not only was the car awarded Platinum in class competition, but it also received the Ferrari Classiche Cup, for the most outstanding factory-certified Ferrari; the La Coppa Per Dodici Cilindri, for the most outstanding 12-cylinder Ferrari; and the Jet Aviation Cup, for the most deserving Ferrari, as selected by all the participants in the show.

This 250 LM has proved its worth by winning awards at international concours events and holding off competitors in historic racing events, and it even put on a few road miles in between. There’s no doubt that 6045 is one of the most compelling Ferraris offered for sale in recent memory.