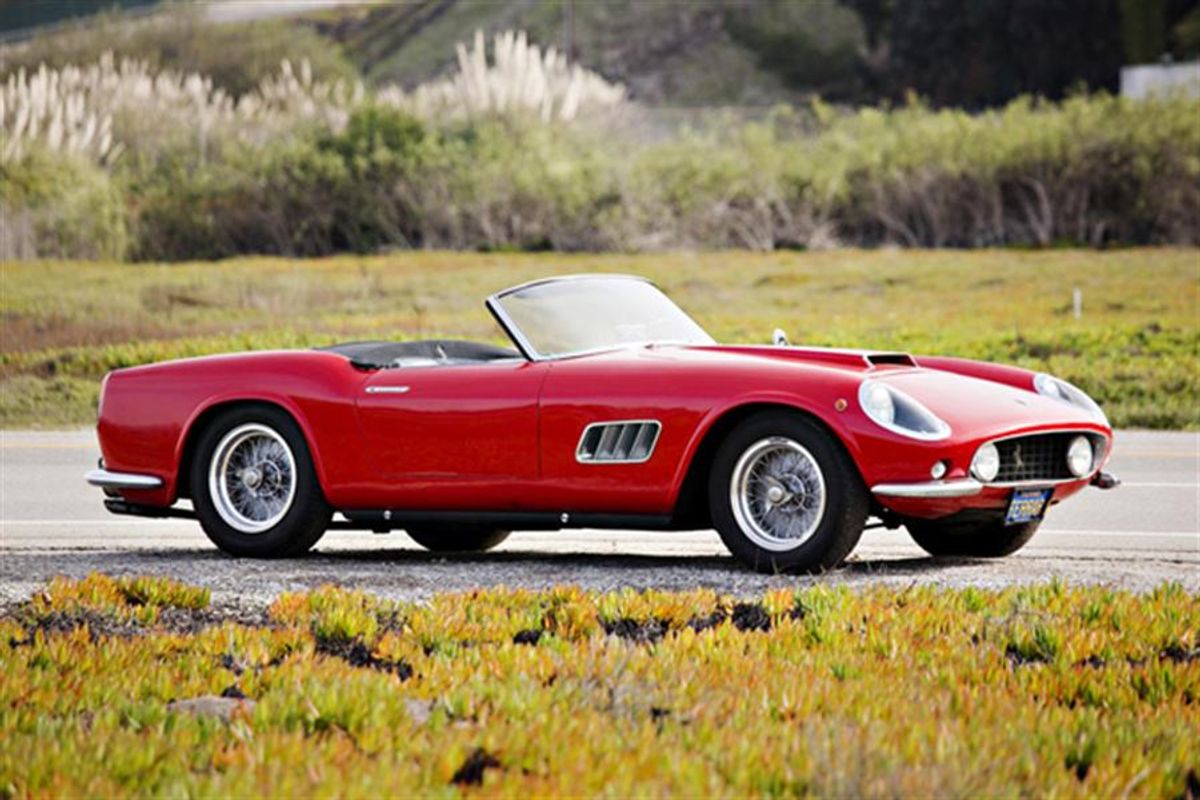 Gooding & Company, the record-setting auction house acclaimed for selling the world’s most significant and valuable collector cars, has announced the addition of two superlative Ferraris to its Scottsdale roster. New consignments include a 1959 Ferrari 250 GT LWB California Spider (estimate: $8,000,000-$10,000,000) and a 1962 Ferrari 400 Superamerica SWB Coupe Aerodinamico (estimate: $4,000,000-$5,000,000), making the January 16 and 17 auctions a must attend event.

“We’re thrilled to expand our superb Scottsdale lineup with the addition of these two remarkable consignments. In 2014 we saw an overall increase in demand for exceptional and rare Ferraris amidst the marketplace and we have no doubt that the trend will continue for the marque in 2015,” said David Gooding, President and Founder of Gooding & Company.1959 Ferrari 250 GT LWB California Spider

The legendary California Spider is equal parts performance and beauty, and perceived by many to be one of the most beautiful Ferraris ever built. Born out of the success and admiration of the 250 GT series, this road-to-race model was designed primarily for export to American clients. The inception of the California Spider was influenced by Ferrari distributors Luigi Chinetti and John von Neumann as they anticipated the demands of their growing market in the United States. They knew their American counterparts would want to keep the performance and competition pedigree of the 250 GT but they could revolutionize the vehicle with an open-air factor, perfect for the long scenic coastal drives of California, thus creating the official 250 GT California Spider.

With its exceptional long-term ownership and infrequent public appearances, the story of this 1959 California Spider is unlike most that have come to auction before it. The true trophy of the late Jack Castor’s collection in Half Moon Bay, California, the hobbyist held sole ownership of this California Spider since 1969 until now as it is presented for the first time at auction. The Spider is complete with early documentation, cherished photography and extensive history files that further boast the car’s singular status. It is a fashionable example finished in Ferrari “Rosso Rubino” red with its original black leather interior and is one of only 49 LWB California Spiders ever produced. The offering of this beautiful, impeccably intact example presents a seldom opportunity and not only does this rare, original model have wonderful and heart-warming provenance but the acquisition of such a fine collectible would be the pinnacle of almost any collection, especially in this active Ferrari market.

1962 Ferrari 400 Superamerica SWB Coupe AerodinamicoPurposefully designed and put in to production to exude exclusivity, the Superamerica was among the apex of desire for Ferrari enthusiasts. The limited and privileged owners list was among a who’s who of notable Ferrari clients, including loyalists, aristocrats, celebrities and European socialites alike. Now more than 50 years later that feeling has transcended, making this special auction presentation, a rare event.

This 1962 example of the bespoke series is the 12th of seventeen Series I 400 Superamericas and will be exhibited in its original “Bianco” white over grey Connolly leather interior. Furthermore, it is one of only seven Aerodinamico coupes outfitted with a left-hand drive and covered headlights. Completed with brilliant Pinninfarina coachwork, this 400 Superamerica headed to auction will be presented with the most desired options available including covered headlights, large hood scoop, rear spats and the preferred interior treatment. This late production model was sold new to its first owner, Paris resident Hubert Charpentier, in April of 1962 through Franco-Britannic Autos Limited of Levallois-Perret, the official French Ferrari importer. The vehicle remained in Paris and Luxembourg for most of its early existence including a brief tenure with Alain-Dominique Perrin, President of Cartier France and Cartier Foundation in Jouy-en-Josas, France. The 400 Superamerica was completely and authentically restored circa 2005 by leading Ferrari specialists Bachelli and Villa which earned a factory Certificate of Authenticity in 2007. That same year, it was displayed at Ferrari’s 60th Anniversary meeting in Maranello as well as the Councours d’Elegance at Fiorano. This gorgeous spectacle of motoring excellence remains at the same level of exclusivity as it did at its conception in the 1960s and will surely garner major attention from the most sophisticated Italian auto enthusiasts in attendance this January.Highlights from the 2014 Auction Year and Looking Forward to 2015

Entering its second decade as a preeminent auction house, Gooding & Company continues to pursue unique and outstanding vehicles to service the growing marketplace of car enthusiasts and collectors. The company’s presence during this past year has garnered global appeal with its unparalleled hospitality, refined presentations, and continuation of producing record-breaking sales.

During the Pebble Beach Auctions Gooding & Company celebrated its 11th year as the official auction house of the Pebble Beach Concours d’Elegance®, and recorded an average price of $990,699 per car with an impressive thirty cars sold for over $1 million. The energetic weekend, which included celebrity appearances from Sir Stirling Moss and Jay Leno, warranted 16 new benchmarks from such marques as Ferrari, Aston Martin and Maserati, among others.

At the annual Amelia Island Auction, which serves as the company’s flagship East Coast destination, the company recorded fifteen world auction records including the 1968 Porsche 907 Longtail, which sold for $3.6 million and served as the star vehicle of the weekend. In addition, Gooding & Company presented one of the most robust and extraordinary collections of BMW automobiles to come to auction in recent years and garnered more than $3.3 million.

The 2014 Scottsdale Auctions resulted in 110 of 117 lots sold, which lead to in an impressive 94% sales rate. Additionally, twelve new world auction records were established, with six cars sold over $2 million and thirteen cars sold over $1 million during the buzzing two-day sale. World-record highlights from the event include the powerful and exclusive 1956 Ferrari 410 Superamerica Series 1 Coupe which sold for an impressive $3.3 million; and the alluring, dark blue 1955 Lancia Aurelia B24S Spider America which sold for over $1.8 million.

Following the highly-anticipated Scottsdale sale, collectors, connoisseurs and admirers won’t want to miss the Amelia Island Auction on March 13, 2015 held at the gorgeous Omni Amelia Island Plantation in Florida. And as the official auction house of the Pebble Beach Concours d’Elegance®, Gooding & Company will round out the auction year with their premium world stage Pebble Beach Auctions, hosted on August 15 and 16 at the wildly popular and well attended Pebble Beach Concours Week.