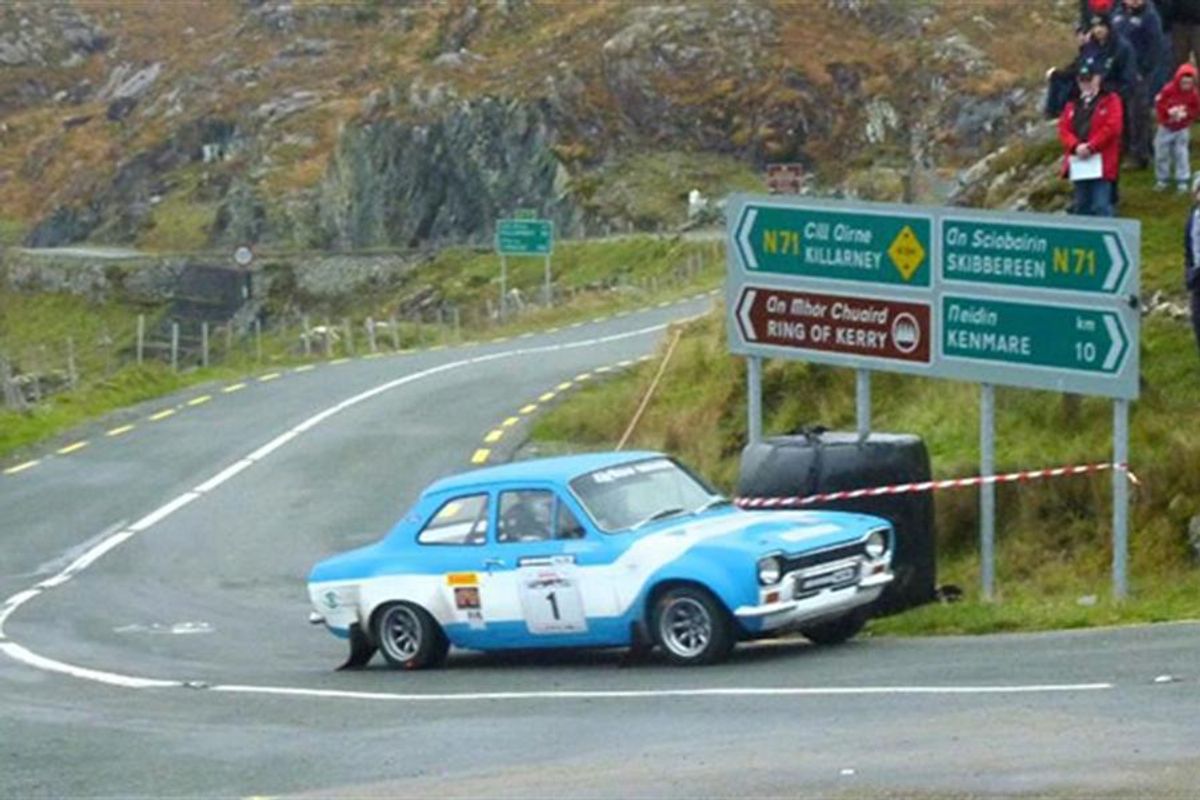 Well over one hundred classic rally cars set off in the early morning mist to tackle the famous and demanding special stages within the Ring of Kerry on the Rentokil Initial Killarney Historic Stages rally.Cars were entered in three classes: Historics (FIA and UK-MSA), Modifieds and Juniors, spanning a wide variety of the usual classic rally car suspects - Minis, Porsches, Toyotas, Volvos, a Manta, a Saab; even an Avenger... but by far the vast majority were Mk1 and Mk2 Ford Escorts.Due to a shared promotional agreement, the winner of the Killarney Historic Stages Rally's Historic Class also wins a free trip to compete next Summer (20 August to 1 September) in the Barbados Historic Rally Carnival.If a non-Barbadian wins the 'King of the Carnival' prize for best combined results on the International RallySprint at Vaucluse Raceway and the Barbados Historic Rally on closed asphalt public roads the following weekend, he/she wins a free return trip in 2016. Should a Bajan win, he/she gets to contest the Killarney Historic Stages next year gratis.To personally promote the Barbados Historic Rally Carnival as well as answer any logistical or technical questions prospective competitors might have had, Rally Carnival organiser Greg Cozier entered an Appendix K Historic Mk2 Escort RS1800 in the Killarney Historic this year, with local co-driver Brian Duggan. The collaboration arrangement between Barbados and Killarney started in 2011; having spent a 'lost weekend' in Killarney bars with a Bajan posse that year, due to the event's cancellation through severe winter weather, Greg was keen to return this year with a car to get first-hand experience of the legendary stages, such as Molls Gap and Ballaghbaema.This year, the pace was hot from the off, as 2014 Irish Historic Rally Champion Denis Moynihan, with Kerry man Gerard Conway on the notes, pushed his pristine Post-Historic 2-litre BDA-powered Mk2 Ford Escort RS1600 into the lead immediately. With Welsh crew Tomas Davies/Eurig Davies (the winning co-driver in Barbados in 2011) snapping at their heels in their Classic RS1800 Mk2 Escort, Moynihan maintained his advantage from start to finish. . . deploying a canny tactical manoeuvre on the final stage.That last stage start had been held back until it was fully dark. It was a fast test, lined with stone walls and thick, close hedges. Cork businessman Moynihan, originally from Millstreet, had already won the Historic class on the Gleneagle Rally of the Lakes this year (also run out of Killarney), and thought hard about pressing his advantage. He chose to drop 10 seconds to Davies in that eighth and final stage. . . and won the rally by 20.9 seconds: "It was max attack until the last stage," he sums-up."I wasn't expecting to win this rally, so this Barbados prize was something I didn't even consider," said Denis at the Killarney prizegiving, just after Barbados Historic Rally Carnival organiser Greg Cozier announced to the celebrating rallyists that Denis had won a free trip for himself, his car and co-driver to the 2015 Barbados Historic Rally Carnival. Cozier shook his hand and presented the crew with their prize certificate, BHRC caps and bottles of Bajan rum.After discussing the wonderful Killarney craic going on at the prizegiving, Moynihan laughed and said: "The craic here in Killarney is one great night out; but I've been told the party is never-ending over there, though, isn't it?"He's right.As for the Barbados Historic Rally Carnival organiser Greg Cozier, he scored a highly encouraging Killarney result of tenth Historic home on his first time on Irish tar, after a few gearbox and fuel pump technical issues; but was he impressed with the Irish event?In his own words: "Hot pace in Killarney on roads with a level of grip completely foreign to this Caribbean island-boy. Epic, very intimidating stages, great organisation and a great night stage. The winner of this event has to be some kind of nutter and the entry list is fantastic."FIA Appendix K cars have doubled in number since I was last here as a spectator; it seems obvious to me that - at the current rate of growth - historic rallying will be the saviour of club rallying around the world, as modern front-running cars become an even more unrealistic aspiration for 99.9percent of us. I'm happy with my top-ten place; I would've been happy with top-20 on my first trip to the very intimidating Molls Gap and Ballaghabaema stages."The Irish rally fans loved our car and we stopped along the way for many 'Kodak Moments'. I can safely promise the Irish visitors to BHRC 2015 a memorable time supporting Moynihan."Now you can't say fairer than that. If you're not Denis Moynihan, there's a bargain inclusive entry deal for the 2015 event.US$4,900 secures: return shipping of one rally car from Portsmouth UK to Barbados, entry to the Historic Rally and Rallysprint, two return flights from London, self-catering accommodation for two for 12 nights and free entry to all - the many - Carnival social events.And, of course there's the fantastic opportunity for families, friends and rally fans to catch some great historic rallying action, mix with the rallyists and have a fun-filled, relaxing Caribbean holiday, with a proper party atmosphere.Check-out the sun-kissed island; there's room for everyone; this is the sort of event the wife and kids won't want to miss.Interested? Regs and schedule are on: www.barbadosrallycarnival.com.Really want to get your entry in now, to take advantage of this great deal? Then email Greg Cozier at: greg@barbadosrallycarnival.com.