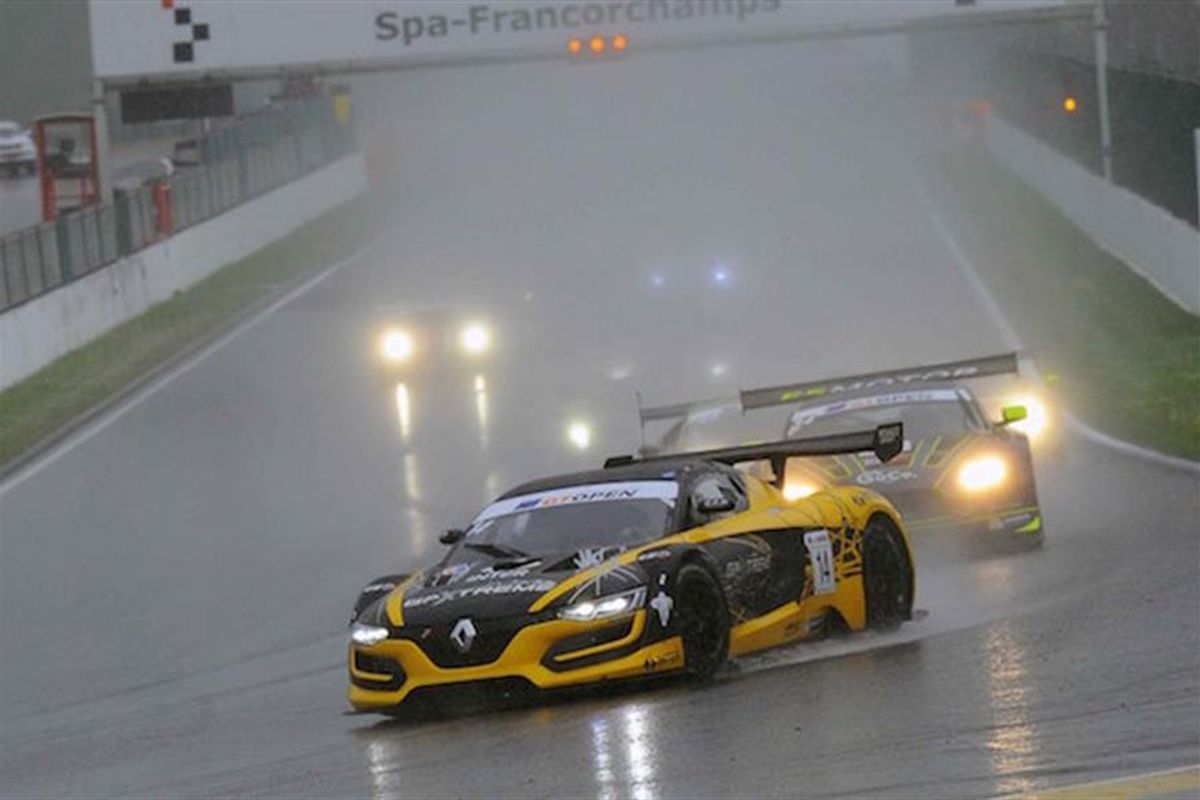 V8 Racing swept the (wet) floor in Race 2 Sunday afternoon in a rain-soaked Spa-Francorchamps track. A typical Spa storm broke out shortly before the start, with the field behind the safety-car for the first 20 of the 60 minutes of the race. The treacherous conditions didn’t scare a Dutchman and a Brit, and Nicky Pastorelli and Josh Webster took a beautiful win at the wheel of the Renault RS01 of the Dutch squad, which returns this year to the GT Open. They are the fourth different (as car brand, team and driver pair) of the season. V8 Racing also won in GT-Am, with Filipe Barreiros and Maximiliaan Braams.

THE RACE - Minutes before the race, it’s heavy rain taking the forefront, leading to a start behind the safety-car, which stays for about 19 minutes (5 laps) into the race.

Ledogar takes perfect start ahead of Rodriguez while Hankey passes Pastorelli for third. Shortly after, in lap 6, the window for driver changes open, with Moiseev, Benham and Silva being the first ones to stop. Conditions remain very challenging and there is a contact at the chicane between Crestani and Ramos for 10th, with Sdanewitsch and Cioci passing both.

The difficult conditions and the perturbed sequence of pit stops give an unusual ranking in lap 10, with West leading over Yoluc and Busnelli, with Rathe, Webster, Noble, Cioci and Keen following. Yoluc and Webster take the lead one lap later, with Cioci, Tappy and Keen climbing up quickly and being right behind Busnelli 3rd. In lap 12, Webster steals the lead from Yoluc, and the trio Cioci-Tappy-Keen passes Busnelli. One lap later, it’s Yoluc conceding the position to Cioci and Tappy, and in lap 16 also to Keen and Crestani, who were fighting hard. In the closing moments, Tappy steals second from Cioci.

Nicky Pastorelli: “Today it really was Spa weather… but it’s very nice to be back to the GT Open and take a second and a win in the second event… I hope we’ll have more weekends like this.”

Josh Webster: “It’s my first time on wet track at spa and it was quite something during the entire stint… I am really happy, and thank the team for counting on me for this round and calling me in on Friday morning!”

STANDINGS AFTER ROUND 4 OF 14