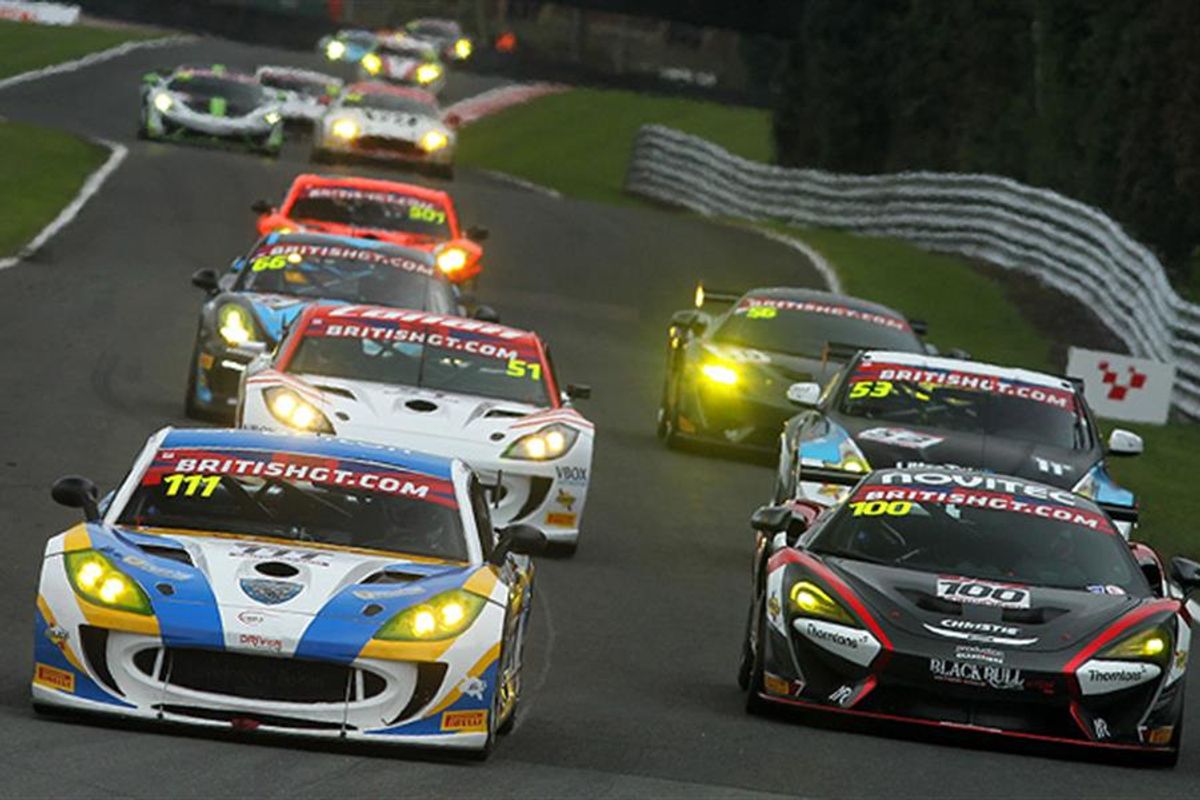 Less than a fortnight after 2017’s season opener, British GT returns to action with a 30-car entry for this weekend’s first two-hour race of the season at Rockingham International Speedway (April 29/30).

Predicting an overall winner around the 1.94-mile ISSC layout has traditionally proven difficult, with four different manufacturers and teams claiming victory there in the last four years. And, with Lamborghini looking like the car to beat, that trend could continue this weekend.

Jon Minshaw and Phil Keen proved unstoppable in wet and dry conditions at Oulton Park where their Barwell Motorsport Lamborghini Huracan GT3 completed a clean sweep of both hour-long races. Not even a 10-second pitstop success penalty could halt their victory challenge in race two, but they’ll need to overcome double that on Sunday if they’re to maintain their 100% start to the season.

Doing so would make them the first crew since David Ashburn and Glynn Geddie in 2010 to win three successive outright British GT races, while no line-up has triumphed in the first three rounds of a season since Tim Mullen and Chris Niarchos managed the feat in 2006.

Those records were set in an era before pitstop success penalties, which see the top-three crews from the previous round held for an additional 20, 15 and 10 seconds during their mandatory driver change. While overturning the full penalty appears unlikely, Minshaw and Keen can take inspiration from 2016 Rockingham race winners Derek Johnston and Jonny Adam who achieved exactly that 12 months ago.

TF Sport’s reigning champions also look like being Barwell’s closest rivals at Rockingham after salvaging third and second places from an Oulton weekend marred by twice starting 11th. They currently trail Minshaw and Keen by 17 points in the drivers’ standings but, with 37.5 up for grabs at Rockingham, the #1 Aston Martin V12 Vantage GT3 has a chance to make serious inroads.

Team-mates Mark Farmer and Jon Barnes sit third in the drivers’ standings and, after completing Oulton’s race two podium, have a 10-second success penalty to serve at Rockingham. That could open the door for Rick Parfitt Jnr and Seb Morris who claimed Am and Pro poles last time out before slipping back in both races. However, with no pitstop success penalties, both Team Parker Racing Bentley Continental GT3s - the second driven by Ian Loggie and Callum Macleod - should be right in contention come the chequered flag.

Like Johnston and Adam, Spirit of Race’s Duncan Cameron and Matt Griffin failed to show their true potential at Oulton after starting both races 12th. But, with no clashing commitments this time around, their Ferrari 488 GT3 could be a dark (prancing) horse to score the Italian marque’s first British GT victory since Rockingham 2014.

The same goes for Barwell’s Liam Griffin and Sam Tordoff whose podium in Oulton’s opening race was tempered by an engine issue early in the second.

Elsewhere, Macmillan AMR might have scored a rostrum first time out were it not for an issue on the grid, while AMDTuning.com with Cobra Exhausts and Century Motorsport will both be hoping for better after solid if unspectacular starts to the season.

Team ABBA with Rollcentre Racing will also be eager for an incident-free weekend after fighting against the clock to re-build its Mercedes-AMG, which was badly damaged when Loggie’s Bentley triggered an accident in Oulton’s second race.

Oulton Park’s first two GT4 races of the season were anything but straightforward, resulting in three first-time winners - two of which were making their British GT debuts - and an incredibly tight drivers’ championship.

Lanan Racing’s David Pittard and Alex Reed emerged from the first weekend with a victory and two-point lead over Adam Balon and Adam Mackay, whose track-club McLaren 570S GT4 won the opening race on debut. Neither crew dominated, though, and - with a 20-second success penalty to serve - Lanan’s drivers in particular will have their work cut out to replicate the podium Reed scored at Rockingham 12 months ago.

Ginetta Junior graduates Stuart Middleton and Will Tregurtha were the model of consistency at Oulton en route to second and fourth places. The HHC Motorsport duo therefore head to Rockingham just five points adrift of the championship lead and without a success penalty. It’s a similar story for PMW Expo Racing/Optimum Motorsport’s reigning champions Graham Johnson and Mike Robinson who twice finished third to stay in touch with Pittard and Reed.

Elsewhere, Marcus Hoggarth and Matthew Graham were runners-up in Oulton’s second race to leave them fifth in the standings, albeit 17 points behind the leaders, while Jan Jonck and William Phillips sit sixth after a pitstop infringement cost them a podium in race two.

The same penalty capped a disappointing first weekend for Black Bull Garage 59’s Sandy Mitchell and Ciaran Haggerty, who started the two races from first and second but left Oulton with just six points to show for their efforts. A seized wheel nut cost them an almost certain win in the opener before a post-race penalty dropped them from first to seventh in the second. Expect the pair to be firmly in the mix this weekend.

The same goes for Century Motorsport’s Anna Walewska and Mike Simpson, who claimed pole for Oulton’s second race before being spun out of contention. The team certainly knows its way around Rockingham after winning there last season before Walewska and then team-mate Nathan Freke were excluded post-race.

BILLY MONGER: POUND FOR A PITWALK

During Sunday’s free British GT pitwalk and driver autograph session fans will be offered the chance to make a voluntary £1 donation towards Billy Monger’s rehabilitation. The 17-year-old sustained life-changing injuries in a British F4 accident at Donington Park two weeks ago, leading to the creation of a Just Giving page. British GT’s drivers will also be asked to donate towards Billy’s cause, while the championship has mandated special #BillyWhizz windscreen banners for Rockingham in an effort to further boost awareness.

Tickets for this weekend’s third round of the season at Rockingham start from just £12, while children aged 15 and under go free (ticket required). Click here for more details.