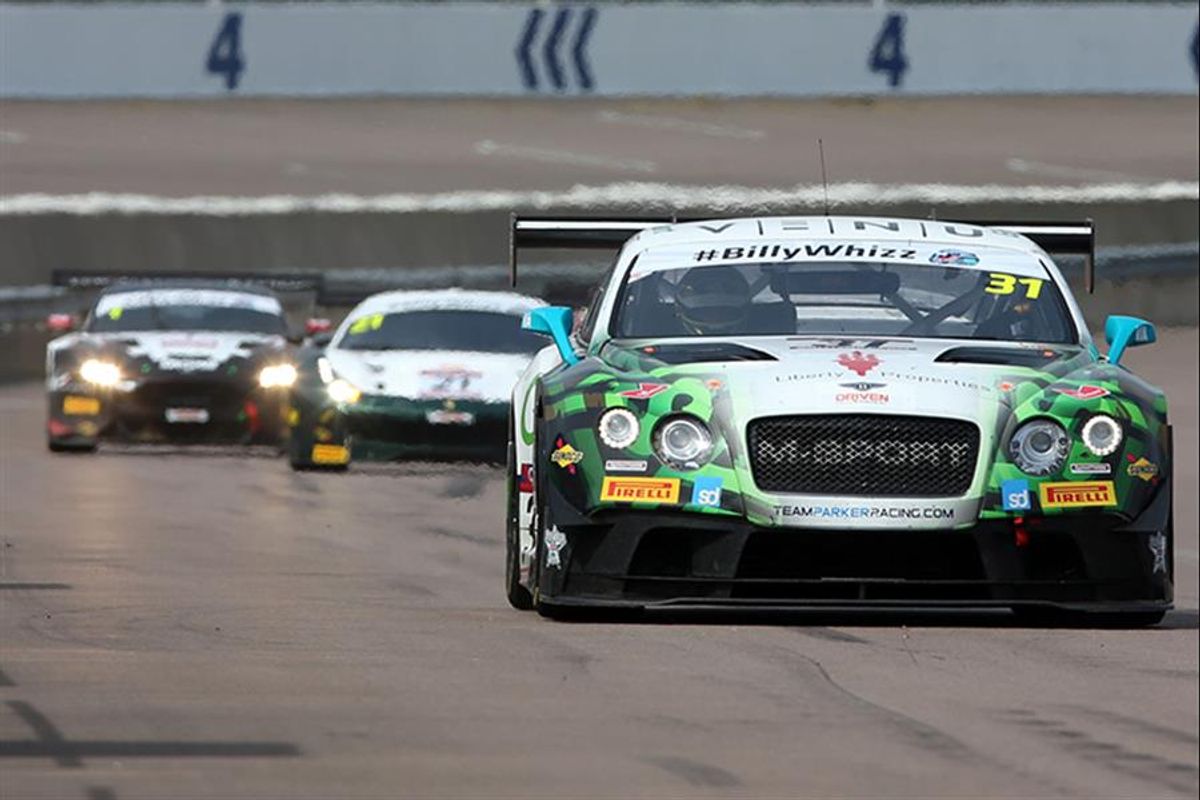 Macmillan AMR and its drivers James Littlejohn and Jack Mitchell also celebrated their first GT3 podium in a two-hour race that will be remembered as a thrilling contest with an uncertain conclusion.

The race began with pole-sitter Derek Johnston retaining the lead from Barwell Motorsport’s Jon Minshaw, who passed Mark Farmer, while the fast-starting Littlejohn vaulted from ninth to third on lap one.

Harry Gottsacker’s stranded Century Motorsport Ginetta necessitated a brief Safety Car period at the start of lap three. But when the action resumed the lead battle quickly developed into a three-horse race, while Farmer dropped back into the clutches of Parfitt Jnr, Cameron, Lee Mowle and Liam Griffin whose poor start saw his Lamborghini plummet from fourth to eighth.

Back at the front and the top-three were soon nose-to-tail. But Johnston looked to be struggling and was powerless to prevent both Minshaw and Littlejohn from diving past at the final chicane. The TF Sport Aston Martin - which was subsequently diagnosed with damaged steering - immediately dropped back while Littlejohn set his sights on passing the Lamborghini ahead. And although Minshaw initially resisted he was powerless to prevent Macmillan AMR’s Aston from eventually diving down the inside at Deene.

Further back a pivotal moment in the race’s outcome was developing. Cameron’s repeated track limit violations earned his #21 Ferrari a five-second penalty, which was added to his in-race time. That meant the 488 GT3 was five seconds further behind on the timing screens than it appeared on track, which would have a bearing on co-driver Griffin’s stint.

Another Safety Car period came and went before the pitstops began on the hour mark, and with Oulton Park’s success penalties applied it was Mitchell - in for Macmillan AMR co-driver Littlejohn - who emerged ahead of Morris whose co-driver Parfitt Jnr also passed Johnston before the stops.

Griffin rejoined fourth but immediately cleared Ryan Ratcliffe’s AMDTuning.com Mercedes-AMG before setting off after Mitchell and Morris. His deficit was eight seconds but such was the Ferrari’s pace that the lead soon became a three-way scrap. The trio ran nose-to-tail for a short while until the Bentley forced its way through at the final chicane, followed by Griffin.

Cameron’s five-second penalty meant Griffin still had to pass Morris and pull away in order for Ferrari to claim its first British GT win in three years. The green 488 finally found an opening but made contact with Morris’ car in the process, which would have repercussions post-race. Nevertheless, Griffin’s next target was to pull a five-second gap in order to negate his penalty by leading on the timing screens as well as the road. But his pursuit of that total was cut short by the intervention of a third Safety Car period with 24 minutes remaining.

A grandstand finish appeared in prospect, but those chances were dealt a blow by the quirk of Safety Car regulations and Cameron’s five-second in-race penalty. MSA rules state a Safety Car must pick up the leader, and although Griffin led on track his car’s penalty actually put him fifth on the timing screens. Race Control therefore had no choice but to wave the Ferrari past the Safety Car in order to rejoin the back of the queue, an action that resulted in Griffin immediately establishing the five-second-plus lead that re-set the timing in his and Spirit of Race’s favour.

The Ferrari duly took the chequered flag an untroubled 25.052s clear of Morris, while Mitchell performed wonders to hold Phil Keen - whose 20-second success penalty had dropped him and Minshaw down the order after the stops - as well as Barwell team-mate Sam Tordoff at bay.

However, while questions were asked about the Safety Car procedure - which was handled correctly by the letter of the regulations - an investigation was immediately launched to establish whether Griffin had gained an unfair advantage by making avoidable contact when passing Morris. There was enough evidence to suggest he had, but with the race run there was no way of allowing the Bentley to re-take the position without imposing a post-race penalty. 26 seconds was therefore applied, which gave Team Parker Racing, Parfitt Jnr and Morris their second British GT3 victories.

Ratcliffe came home sixth in his and Mowle’s AMDTuning.com Mercedes-AMG while Farmer and Barnes both recovered from spins to finish ahead of their pole-sitting TF Sport team-mates Johnston and Jonny Adam.

A puncture put paid to Ian Loggie and Callum Macleod’s hopes in the second Team Parker Bentley, but they did recover to finish ninth ahead of Team ABBA with Rollcentre Racing’s Richard Neary and Martin Short.

Championship Manager Benjamin Franassovici: “What happened today with the Safety Car procedure was very unfortunate but, given the letter of the regulations, not something we could have controlled. We follow the MSA’s regulations which state the Safety Car must pick up the race leader, which in official timing was not the #21 Spirit of Race Ferrari. Race Control therefore had no choice but to wave it by. Applying in-race time penalties contributed to this but these are the rules by which we and others race under the MSA’s jurisdiction. Today we found an annomally, which will be investigated fully. One way or another there must be changes to avoid this situation from arising again.”