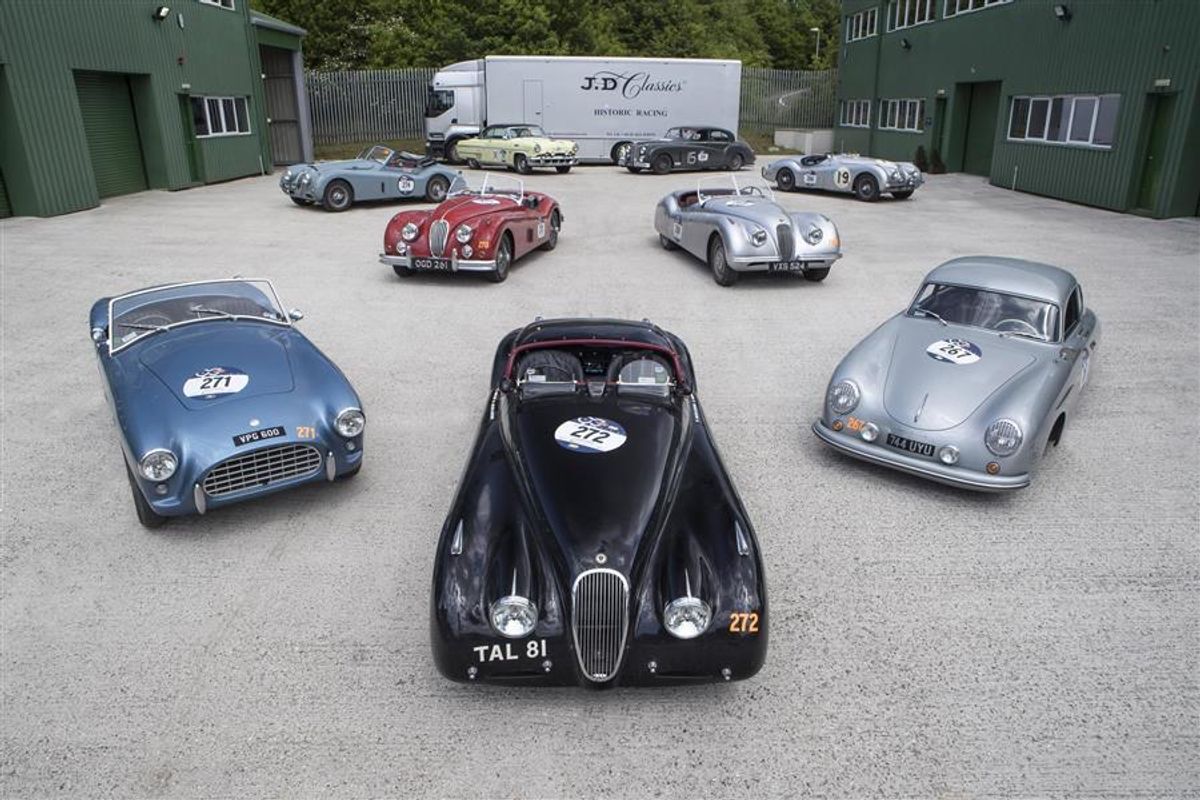 Among the JD Classics entries were three Jaguar XK120s, two Jaguar XK140s, a Porsche 356, Lincoln Capri and an AC Ace

JD Classics – one of the world’s leading classic car specialists – has returned from another hugely successful Mille Miglia, one of the classic car world’s most demanding events. As a gold sponsor of the event for the third year running and with ten supported entries for 2017, the JD Classics team are Mille Miglia experts.

With 1000 miles of driving to be done in the course of just a few days, the Mille Miglia requires serious preparation. Before transporting all ten entries to the starting point at Brescia, each of the JD Classics entries spent months being carefully fettled by expert engineers and craftsmen at the team’s Maldon-based HQ.

The ten cars included three Jaguar XK120s, two Jaguar XK140s, a Porsche 356, Lincoln Capri and an AC Ace, all of which gathered in Brescia ahead of the start for scrutineering. Also on-site was the JD Classics hospitality lounge, open to all competing crews.

With scrutineering successfully complete, it was time for first stage of the Mille Miglia to get under way. Each of the JD Classics entries departed, followed by its own support vehicle and crew, ready to get competitors back on the road should anything go wrong.

With driving stints as long as 15 hours at a time, taking in Italy’s most incredible roads from Brescia to Rome and back to Brescia, the Mille Miglia is both the most breath-taking and most demanding road rally in the world. Around 20% of competitors don’t even make it to the finish line, such are the demands placed on both car and driver.

But JD Classics’ decades of experience in preparing world-class competition cars shone through as its entries battled through the tight and winding roads towards San Marino, and torrential rain in Rome. The JD Classics engineers worked tirelessly through the nights to have the cars in perfect working order at the beginning of each day. Not a single major fault occurred during the collective 10,000 miles driven by the cars – an example of the world-class work of the JD Classics team.

Run as a time trial event, rather than a race, smooth-running of the cars is paramount. And the reliability of the JD Classics’ cars allowed them to finish strongly in the final rankings, with the team’s Jaguar XK140 and Jaguar Mk VII both in the top 200 – an excellent result in an event competed by around 450 time trial experts.

JD Classics founder, Derek Hood, said: “The Mille Miglia is such a beautiful and unique spectacle, but there’s no doubt that it’s incredibly demanding for the cars and drivers. That’s why we work so hard preparing the cars at our workshop back in Maldon, why we have expert engineers on the road in Italy and why we know this event inside-out – so we can always ensure our clients enjoy only the best bits of the Mille Miglia.”