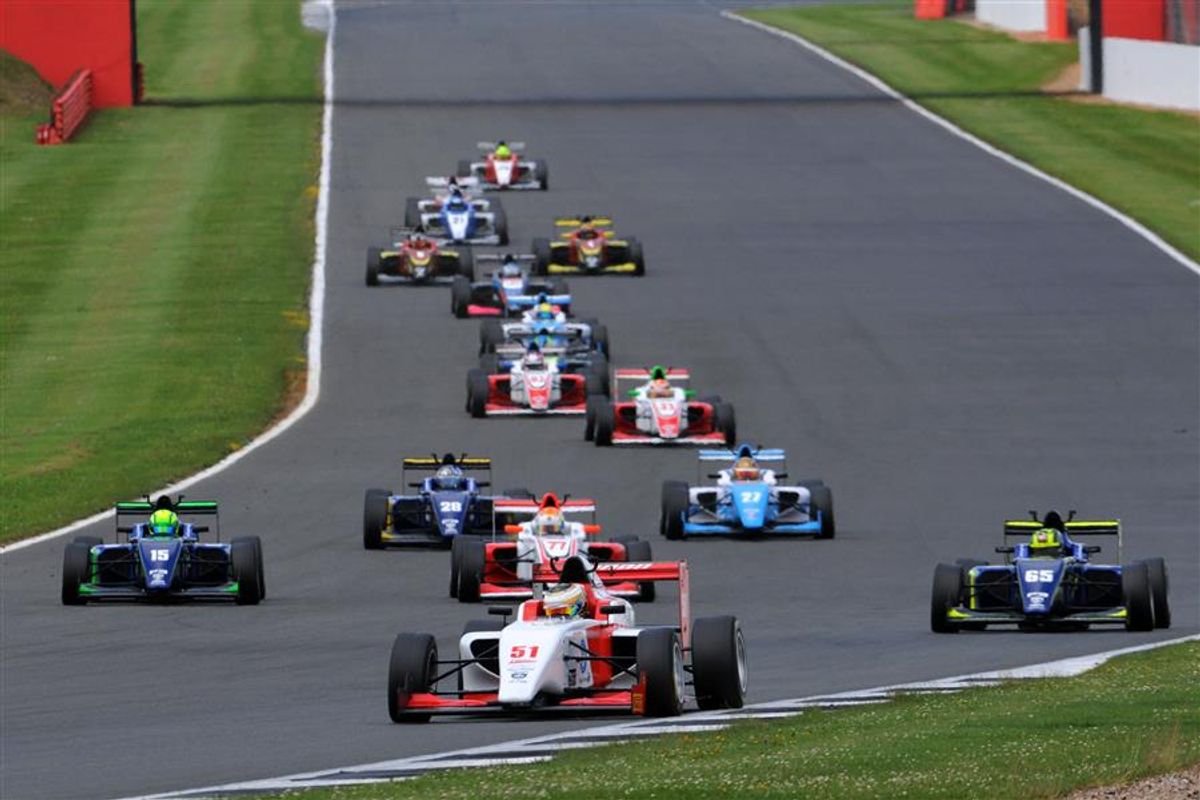 The pre-season title favourite gets his championship assault back on track with pole position and a win at the home of the British Grand Prix, whilst Enaam Ahmed finishes second to extend his title lead.
Lanan Racing's Toby Sowery dominated proceedings on the opening day of BRDC British Formula 3 action at Silverstone today (Saturday 10 June), taking pole position at the British Grand Prix venue and winning the opening race by over five seconds from championship leader Enaam Ahmed, whilst Ahmed's Carlin team-mate James Pull completed the podium.

Sowery topped qualifying for the first of the weekend's three races, beating Ahmed and Pull for pole position.

Sowery, quickest in Friday testing, continued his form into Qualifying. It didn't take long for him to post the session's fastest time, which was close to last year's pole position lap. Toby elected not to waste another set of tyres, however, and whilst he stayed on track to ensure his time was safe, made no further improvements.

Meanwhile a late-starting Ahmed jumped up the order mid-way through the session and would become Sowery's closest challenger. Carlin team-mate Pull joined him at the sharp end of the times, losing out to Ahmed almost by as much as the title leader had fallen short of the pole-sitter.

In fourth place was Rockingham winner Ben Hingeley, just seven hundredths of a second ahead of Cameron Das, who has also taken a victory this year at the Corby track. Sixth place was claimed by Callan O'Keeffe, two places ahead of team-mate and Snetterton winner Jordan Cane, the Douglas cars sandwiching Double R's Guilherme Samaia. The top ten was completed by Fortec pair Manuel Maldonado and Nicolai Kjaergaard.

After the session pole-sitter Sowery said: "[It's] not quite as big a margin as we’ve been comfortably at, but pole’s still a very good result. I think if we put another set of new tyres on halfway through we would have [beaten last year’s pole time], but obviously it’s not just about qualifying, so we didn’t go for that option."

At the start, Sowery assumed an immediate lead and spent the opening laps fending off the attentions of Ahmed, whilst behind the championship leader; Hingeley, Pull and O'Keeffe battled over third place. Pull managed to hold onto his qualifying position, but Hingeley was less fortunate, losing a place to O'Keeffe. Behind, the main losers in the opening lap skirmishes were Das, who fell to seventh place between the Fortecs of Maldonado and Kjaergaard, and Cane, who dropped to the tail of the field. Meanwhile Chase Owen's race ended before the lap was complete.

As the race progressed, Sowery began to pull clear of Ahmed, who was having to fend off the attentions of his team-mate, with O'Keeffe remaining in touch with the podium fight and Hingeley dropping back.

Whilst the top five remained in this order until the chequered flag, sixth place became an intense fight between Das and the Fortecs of Maldonado and Kjaergaard. Carlin's Das was determined to pass the Venezuelan and tried several manoeuvres, which proved successful as he cleared the two cars, and Kjaergaard also passed his team-mate. Whilst this meant that Maldonado fell to eighth place, this result means he'll start race two from pole position.

Ninth place was taken by Jamie Chadwick, who was the main beneficiary of the opening lap battles. She fell back from the battle for sixth place, and ended the race just clear of a fight between the Chris Dittmann cars of Jeremy Wahome and Omar Ismail. Wahome was running in tenth place, but lost out to team-mate Ismail at the end of the race, despite trying his best to regain the place.

A delighted Sowery finished the race over five seconds clear of Ahmed and this moves him to within six points of O'Keeffe in fifth place in the standings. Ahmed's second place means that he extends his title lead over team-mate Das, the gap now 56 points.

On the podium, where the trophies were presented by GT racing BRDC member Stuart Hall, Sowery said: "Enaam got a really good getaway again, put a lot of pressure on for the first two laps, but we managed to maintain a gap and eventually come out with the win."

The partially-reversed grid race two at Silverstone gets underway at 09:00 tomorrow (Sunday) with Maldonado on pole position. You can, as always, follow all the action through live timing and updates on the official British Formula 3 website.