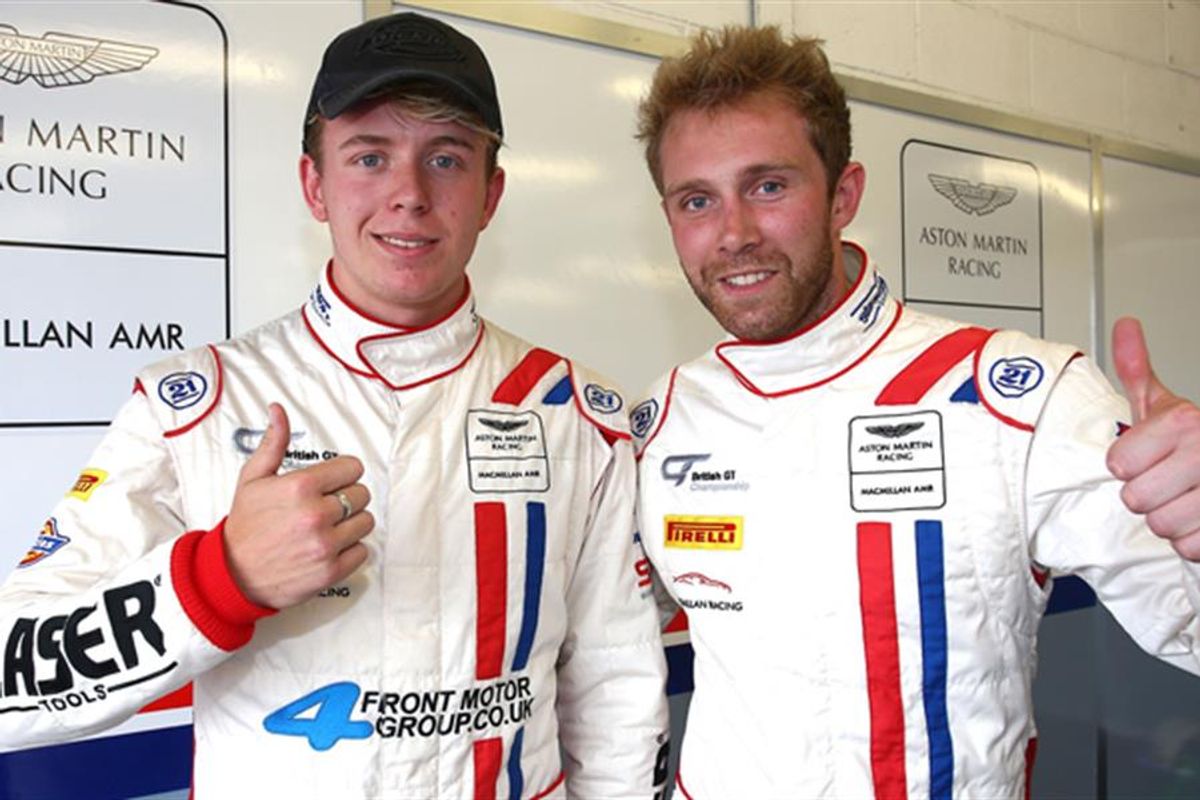 GT3:
British GT’s two-part qualifying session once again delivered a tight scrap for outright pole, and one that was ultimately decided by less than a tenth under overcast skies at Silverstone.

Macmillan AMR’s Jack Mitchell claimed his and the team’s maiden pole at Snetterton two weeks ago, but this time it was Silver Cup co-driver Littlejohn’s turn to tackle British GT’s Am contingent in the first 10-minute session. And he duly delivered to initially give the Aston Martin a 1.1s lead over Rick Parfitt Jnr’s Team Parker Racing Bentley and the sister Continental GT3 driven by Ian Loggie.

However, Macmillan AMR’s V12 Vantage is balanced with weight to even out its natural edge over the Pro/Am crews. That was perfectly illustrated at the start of the second session when Mitchell slipped behind Morris, who’d taken over Parfitt Jnr's Bentley. However, Mitchell wasn’t finished and improved his time on the following tour to pinch pole by less than a tenth.

Duncan Cameron ended the Am session seventh fastest but starts tomorrow’s race third thanks to co-driver Matt Griffin’s superb effort aboard the Spirit of Race Ferrari 488. The pair were a combined 0.644s shy of pole but slender 0.021s faster than Barwell Motorsport’s Jon Minshaw and Phil Keen thanks to the Irishman setting the session’s second quickest overall time.

Barwell's championship-leading Lamborghini completes the second row at the expense of Loggie and Callum Macleod, who slipped from third in the first session to fifth in the final results after their Bentley suffered an intermittent loss of power.

Century’s Ginetta and AMDTuning.com’s Mercedes-AMG complete the GT3 runners in 10th and 11th.

It was the consistency rather than outright speed of HHC’s Ginetta duo that ultimately saw them home after lapping within two tenths of each other’s times. First up was Middleton, who stamped his authority on the session by going 0.5s faster than nearest rival Haggerty, while another of this season’s championship protagonists - Lanan Racing’s Alex Reed - was a further four tenths further back.

William Phillips ended the first session fourth quickest before handing over to Macmillan AMR co-driver Jan Jonck, whose rapid lap - one of just four in the 2m12s bracket - hoisted their Aston Martin one place to third in the final classification. UltraTek/RJN and Nissan also celebrated their best qualifying result of the year, as well as first in the Pro/Am class, thanks to the combined efforts of Kelvin Fletcher - who was fifth fastest in the first session - and Struan Moore, while Adams Balon and Mackay maintained their fine run of consistency to hand track-club fifth.

All three crews benefitted from a tough session for David Pittard, whose Lanan Ginetta dropped from third after the opening 10 minutes to sixth in the final combined times. Tolman Motorsport’s David Pattison and Joe Osborne head up row four alongside Black Bull Garage 59’s second McLaren of Akhil Rabindra and Dean Macdonald.

There were other standout performances further down the timing screens. Scott Malvern set the second fastest time of anyone to help Team Parker Racing’s Porsche claim ninth, but he was still a tenth shy of Martin Plowman’s best - a 2m12.692s - aboard UltraTek/RJN’s second Nissan 370Z, which ended up with the fastest time of all.

Two Invitation class cars, which are not running to GT4 specification, nevertheless contested both sessions. Stratton Motorsport’s Lotus Evora starts in front of the GT4 contingent thanks to the combined efforts of Gavan Kershaw and Stuart Hall, while GPRM’s Toyota GT86 lines up just behind HHC’s Ginetta.

James Littlejohn, #24 Macmillan AMR Aston Martin V12 Vantage GT3: “The BoP’s perhaps a little more in our favour this weekend and you can see that from how close it is at the top. Jack [Mitchell] and I did a really good job compared to the other Astons given the extra weight we carry as a Silver pair, but maybe I lost a little bit of time as we’d never run new tyres here before qualifying. One-lap pace isn’t our strongest suit anyway because we work harder at managing the pace over a stint given the extra weight. Some of the newer cars are naturally better at that, but at Rockingham we were able to build a gap at the start, which helped us towards the end when we weren’t as fast.”

Adam Christodoulou, #88 Team ABBA with Rollcentre Racing Mercedes-AMG GT3: “It was a little lively through Maggots and Becketts but I hooked up the rest of the lap. I didn’t leave much on the table! It’s great to be quickest of the Pro group but we’d love to convert that into a podium or at least a really good result tomorrow. The Mercedes-AMG tends to look after its tyres a bit better than most, and from what I’ve seen Richard is also a better racer than he is qualifier, so we’re in a good position.”

Will Tregurtha, #55 HHC Motorsport Ginetta G55 GT4: “Obviously we’re delighted with pole but it wasn’t easy! The BoP here means what our Ginetta gains through the corners it loses along the straights, and there’s plenty of those at Silverstone! The McLaren works in the opposite way, a bit like Rockingham, so tomorrow could be a game of cat and mouse. We have the advantage of no success penalty but one Safety Car will negate that. I don't think we’ll really know where we stand until after the final pitstop.”

Martin Plowman, #53 UltraTek/RJN Nissan 370Z GT4: “Silverstone really suits the Nissan, but this is also the best car the RJN boys have given me all year. They’ve nailed the set-up after working really hard to develop the package. I’m really happy with how it feels, and Richard [Taffinder’s] improving, too. That’s also evident with the second car - Kelvin [Fletcher] nailed his lap today and Struan [Moore’s] done exactly what we wanted despite being thrown in at the deep end with very little running.”

Tomorrow’s three-hour Silverstone 500 gets underway at 13:35. Watch it live on Front Runner TV and on British GT’s Facebook page.