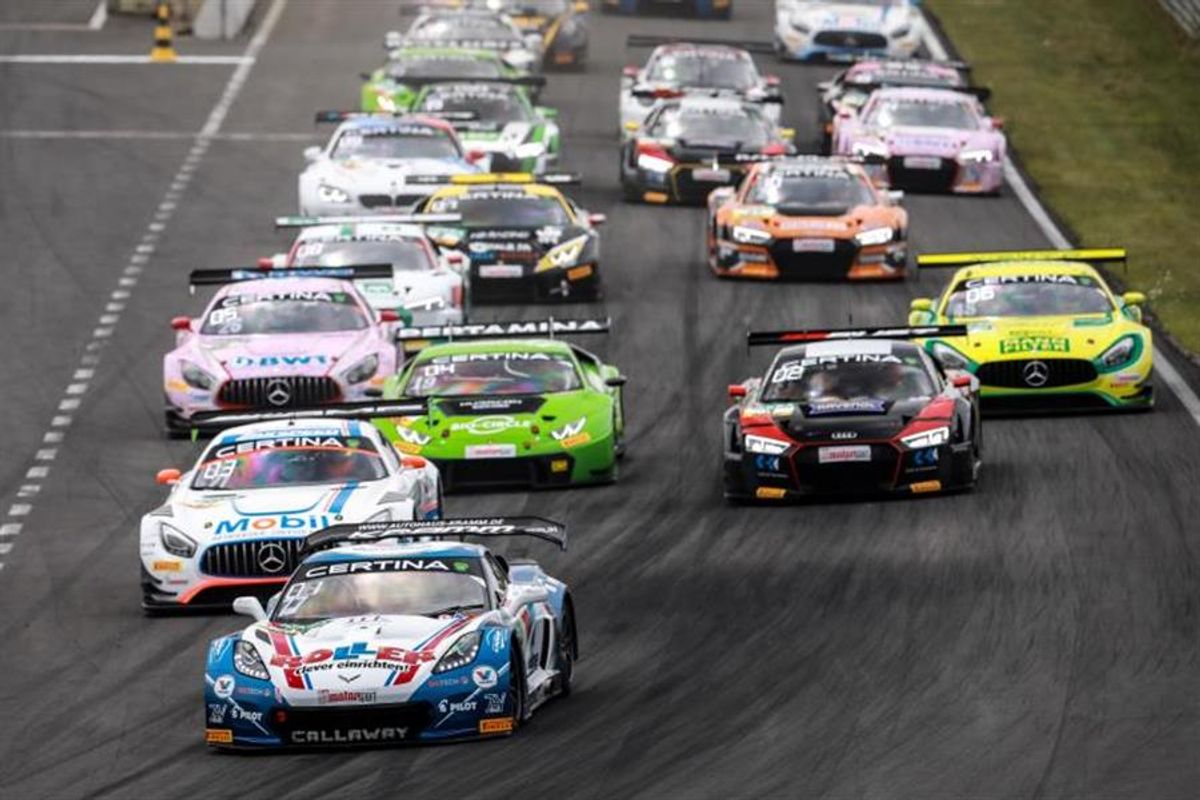 Joy for the Dutch fans as local favourite Renger van der Zande (31, NL) and championship leader Jules Gounon (22, FRA) in a Corvette C7 entered by Callaway Competition won the seventh round of the 2017 ADAC GT Masters at Zandvoort. With this second victory of the season, Gounon secured the unofficial title of 'half-time champion'. Also making their first podium appearance of the year were Audi drivers Markus Pommer (26, DEU) and Kelvin van der Linde (21, ZA, both Aust Motorsport) and the Mercedes AMG duo of Indy Dontje (24, NL) and Marvin Kirchhöfer (23, DEU, both Mercedes-AMG Team HTP Motorsport). "The win feels like I've won a world championship," said a jubilant van der Zande after claiming a maiden series victory. "Winning here on my home circuit of Zandvoort is just incredible."

While pole-sitter Jules Gounon was successfully defending pole, Mercedes man Luca Stolz (21, DEU, Mercedes-AMG Team ZAKSPEED) managed to get past Markus Pommer, who had shared the front row, to take second place. Over subsequent laps, Gounon, Stolz, and Pommer gradually pulled away from the rest of the field. It remained that way until the mandatory round of pit stops, with only a second separating the three of them. Van der Zande, stepping in for regular driver Daniel Keilwitz (27, DEU) due to injury, then brought the number 77 Corvette safely home for its second win of the campaign. For the local favourite, it was a maiden win in the Super Sports Car League, while for Gounon, it was victory number two, the first having come at the Red Bull Ring. The result further consolidated Gounon's lead in the championship and secured him the unofficial title of half-time champion.

Markus Pommer and Kelvin van der Linde in an Audi R8 crossed the line in P2. And yet another Dutchman made it onto the podium, as Indy Dontje (24, NL) partnered by Marvin Kirchhöfer (23, DEU) took third place in a Mercedes-AMG. For this particular Mercedes-AMG team HTP Motorsport duo, it was a maiden Top Three finish in the ADAC GT Masters.

The next two positions went to cars also sporting the Mercedes star on their grille. Sebastian Asch (31, DEU) and Stefan Mücke (35, DEU, both BWT Mücke Motorsport) took the chequered flag in fourth place ahead of Luca Stolz (21, DEU) and Luca Ludwig (28, DEU, both Mercedes-AMG Team ZAKSPEED). The latter might well have featured in the podium party if they had not been handed a drive-through penalty for cutting their pit stop short.

Nicky Catsburg (29, NL) and Philipp Eng (27, AUT both BMW Team Schnitzer) in the BMW M6 were sixth, followed by Trophy winners Rolf Ineichen (39, CH) and Christian Engelhart (30, DEU, both GRT Grasser Racing Team) in a Lamborghini Huracán. Mathieu Jaminet (22, FRA) and Michael Ammermüller (31, DEU, both KÜS Team75 Bernhard) were the best placed of the Porsche 911 contingent in eighth. The remaining championship points were scored by the Mercedes-AMG duo of Patrick Assenheimer (25, DE) and Maximilian Götz (31, DEU, both Mercedes-AMG Team HTP Motorsport) and by the Lamborghini pairing of Florian Spengler (29, DEU) and Christopher Zanella (27, CH, both Team HB Racing).

Jules Gounon (Callaway Competition, Corvette C7 GT3-R):
"I am very satisfied. So far, it's been a perfect weekend. The only downside is that Daniel unfortunately can't be here for it. Being 'half-time champion' doesn't actually mean a lot. What matters is being ahead right at the end. Until then, we'll take each race as it comes. It wasn't easy today. The Mercedes-AMG with Luca Stolz put us under a lot of pressure and ultimately set the fastest race lap when Luca Ludwig took over. We may not have been the quickest out there today, but we at least managed to keep the others behind us."

Renger van der Zande (Callaway Competition, Corvette C7 GT3-R):
"I am very happy to have won here in my home race. I even slept at home in my own bed. I was asked by the team if I could step in for Daniel Keilwitz and help Jules in his title challenge. I did not hesitate to accept, but it's a pity Daniel can't be here. Up to the safety car deployment, I had controlled the race, but after that it was really tight again. The tyre pressure went down behind the safety car and I was picking up a lot of marbles. Consequently, I had to brake a lot earlier, and at times I was worried that I'd sustained a puncture. However, I finally figured out what I had to do to get grip back in the tyre."