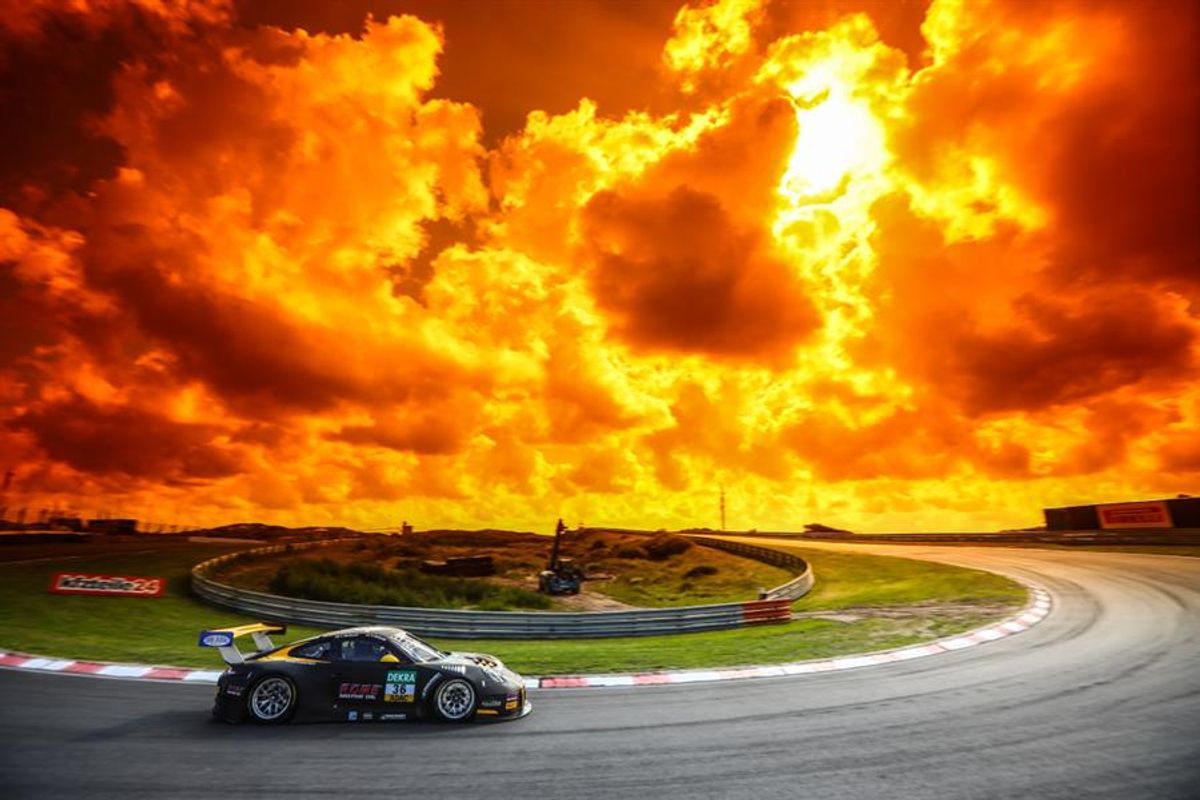 Heavy rain and high drama made for an unpredictable eighth round of the ADAC GT Masters season at Zandvoort in The Netherlands on Sunday, 23rd July, where Alex MacDowall and team-mate Klaus Bachler overcame all the odds to post a very hard-earned top 10 finish.

Despite a pit-lane start for the No.36 Porsche 911 GT3R – required for a late switch to wet-weather tyres – and an unfortunate drive-through penalty as a result of a time infringement during the mid-race driver change pit-stop, the duo made a welcome return to the points-paying positions.

With no fewer than four Safety Car periods during the second of the weekend’s two contests at the Dutch track, the encounter was packed with incident but Carlisle racer MacDowall and Austrian driver Bachler threaded through the atrocious conditions with strong performances.

Arriving at Zandvoort with a fully rebuilt Porsche following the huge car-wrecking accident at the Red Bull Ring last month, two clean races were very much needed and in the dry seventh round on Saturday the bigFM Racing Team Schutz Motorsport duo took 13th spot from 19th on the grid.

“We thought we’d got nothing to lose starting race two so far back, so we gambled on slicks but I said we needed to box for wets straight away on the formation lap”, said MacDowall, “By the time we fitted the tyres, the second formation lap had just completed so we didn’t lose that much time really. The car was good in the wet but then the pit-stop was chaos – there were cars everywhere.

“I think because of how congested the pitlane was, cars at different angles, we were closer to the fast lane and when Klaus left the pits it meant it was a shorter distance into the fast lane – so our stop was fractionally too quick. He’d got up to seventh, so the penalty was a shame, but finishing top 10 after everything was a good result.”

In round seven on Saturday, Bachler took the opening stint and had plenty to do from 19th on the grid but he climbed through the order well. Following an initial aborted start due to a car becoming stranded on the original formation lap, when the action proper got underway Bachler put together a good opening and moved up into 14th position by the start of lap two.

Running close behind the No.7 Lamborghini with 45 minutes to go, Bachler maintained 14th and when the pit-stop window opened he remained on track. As others served their mandatory driver change stops, Bachler climbed into seventh place before then pitting with roughly half an hour to go.

MacDowall joined the race with around 27 minutes left on the clock and held 15th position as the race order settled. Managing to move up into 14th place, the action then fell under Safety Car conditions with just over 10 minutes remaining due to a car in the gravel at Tarzan.

Moving into an elevated 13th spot as a result, the action only resumed with a couple of minutes left so there was very little opportunity for MacDowall to make further headway. He went on to take the flag on lap 34 in 13th place – albeit less than 0.4 seconds shy of the top 10 on the dash to the line.

Rain arrived at Zandvoort on Sunday and MacDowall was set to take the first stint of round eight from 24th position on the grid after a tough qualifying session. At the end of the first of two formation laps, though, the Briton pitted to change to full wet-weather tyres.

With a huge amount of work to do in extremely difficult conditions, with lots of spray, MacDowall closed down the gap to the pack ahead and soon made progress. By lap nine he had climbed through from 27th position into 22nd place and then the first of the four Safety Car periods was required.

Holding an elevated 19th position as the Safety Car circulated, MacDowall and almost the entire grid pitted for the driver-change stops with just over half an hour to run. Bachler climbed aboard and emerged back into the race inside the top 10, before moving up further into seventh.

Then, though, he had to serve the drive-through penalty which he fortunately managed to do just before the Safety Car was called again. Re-emerging in 14th place, he then took 13th position before the third cautionary period when a car crashed out at Tarzan.

Racing resumed once more with just a few minutes to go but a multi-car tangle again resulted in the Safety Car, which then remained on track to the finish. With three cars coming to grief, Bachler was able to assume 10th position – a great result for the duo all things considered.

MacDowall added: “All weekend the Porsches have been off the pace really, the BOP [Balance of Performance] needs to change as we’re all struggling. The performance is closer in the wet, but in the dry there’s a big gap to the other cars. It’s such a close championship, so competitive, and you need to be in the fight at least. Hopefully things will change for the next round.”

Germany’s Nurburgring will host rounds nine and 10 of the ADAC GT Masters season over the weekend 5th/6th August.