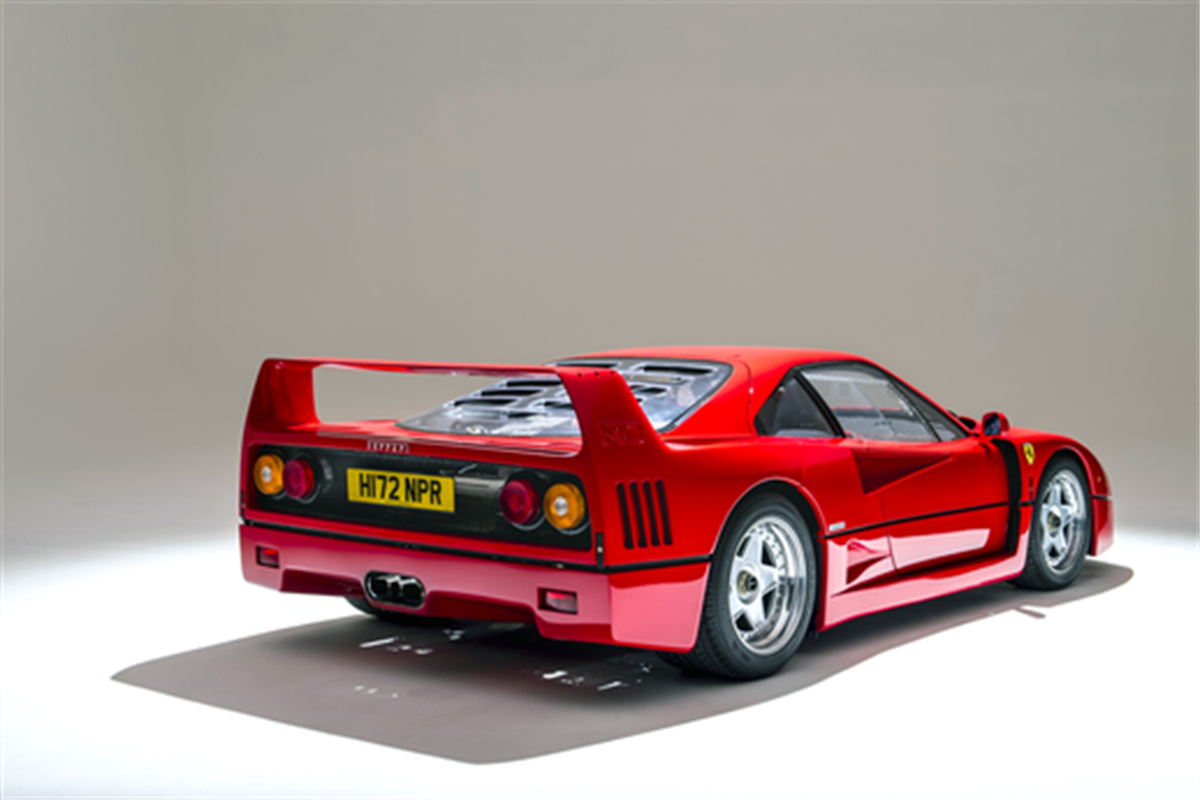 Ferrari F40 to be auctioned on 30th anniversary of the F40 and 70th anniversary of Ferrari.
Classiche certified, non-cat, non-adjust, sliding windows example.
Offered for sale by Silverstone Auctions at Blenheim Palace on 2nd September with an estimate of £875,000 - £975,000.
Rarely does an authentic, Classiche certified, Ferrari F40 come to market, but an amazing example of the iconic eighties supercar will cross the auction block with Silverstone Auctions at the prestigious Salon Privé Sale on 2nd September.

On the 30th anniversary of the F40 and the 70th anniversary of Ferrari, the hugely desirable non-catalytic converter, non-adjustable suspension, sliding plexiglass windows Ferrari F40 will be offered with an estimate of £875,000 - £975,000.

The Ferrari will star in a line-up of seventy of the world’s finest classic and sports cars scheduled to cross the auction block at Salon Privé, a glamorous Concours D’Elegance and garden party set against the backdrop of Blenheim Palace. It will be a fitting occasion for the sale of the F40 as the Salon Privé Concours Masters competition will feature a tribute to 70 years of Ferrari on the day.

The first supercar to break the 200mph barrier as Ferrari fought for dominance in the performance car market in the eighties, the stripped down 478 bhp Rosso Corsa Ferrari F40 first appeared in 1987 and immediately set the world alight. The car is equipped with a DOHC V8 engine with twin turbo chargers and is capable of a 0-60 time of just 3.8 seconds.

The most authentic, pure race bred versions, with none of the ‘extras’ of catalytic converters, adjustable suspension or winding windows, are the most desirable among enthusiasts, and this example also underwent a detailed 300,000 euro restoration by Carrozzeria Zanasi in 2016, after which Classiche certification was granted by the Ferrari factory.

“All F40s are desirable and normally well presented, but very rarely a car such as this comes to market with the kind of fastidious attention to detail that will impress the most hardened enthusiast,” says Harry Whale, operations manager at Silverstone Auctions. “It’s a remarkable car, and it’s certain to turn heads.”

The F40 has been lightly used, covering less than a verified 3,000 km before the restoration and just 592 km since. It was recently serviced in advance of the sale by Carrozzeria Zanasi.

Named in celebration of the company’s 40th birthday, the Ferrari F40 was the famous marque’s entry into the raging supercar war of the late 1980s. With the Lamborghini Countach as the poster-child for a generation and Porsche’s 959 pioneering technology never before seen in the automotive industry, Enzo Ferrari was predictably not keen that his rivals stole the show. Setting the 959’s top speed of 197 mph firmly in its sights, Ferrari decided that it would take that record back and achieved that aim with the F40 rocketing to a top speed of 201.4 mph, making it the first production car ever to break the 200 mph barrier.

Ferrari, however, focused on a different approach than Porsche. Rather than pursue the development of innovative new technologies, Ferrari turned to its Formula 1 team for inspiration and stuck with the tried-and-tested method of “less is more”, making the F40 as lightweight as possible pioneering the use of carbon fibre for its chassis and bodywork, and tipping the scales at a svelte 2,400 pounds. Its remarkable bodywork was designed with aerodynamics in mind and could provide excellent high-speed stability as well as plenty of cooling airflow to the engine. The interior made no compromises in the relentless pursuit of performance, either. Fitted with lightweight bucket seats and stripped out for racing, the car could be specified with roll-up or fixed windows, had no carpets, and even featured door pulls instead of traditional handles.
To make the most of the lightweight construction, the car would need a serious power unit and at the F40’s heart was its engine: a twin-turbocharged DOHC V-8 based on that of the 288 GTO. With bigger bores and a shorter stroke, the longitudinally mounted four-cam, with twin IHI turbochargers, was a masterpiece and produced a monstrous (at the time) 478 horsepower. 0–60 took just 3.8 seconds, and the car could hurtle itself through the quarter-mile in 11.8 seconds. Braking was equally impressive, and the F40 could go from 60 mph to a dramatic halt in just 119 feet.

Originally intended for a limited production of around 400 units, Ferrari quickly realised that demand for the F40 was much stronger than it had anticipated, and 1,315 examples were eventually assembled. Every F40 would leave the factory in Rosso Corsa paintwork and left-hand drive configuration. In 1987, its list price was roughly £165,000 in 1987 but many traded hands for much more than that at the time. It became the most profitable car in Ferrari's history and in every respect, was a much-appreciated 40th Birthday present.

Coincidentally, a few weeks ago it was the 30th anniversary of the first F40, and we at Silverstone Auctions are absolutely delighted to have been chosen to offer this amazing 1989, non-catalytic converter, non-adjustable suspension, Plexiglass sliding windows, F40 for sale at Salon Privé.
All F40s are desirable and normally well presented, but very rarely a car such as this comes to market with the kind of fastidious attention to detail that turns the heads of hardened Garagiste and seasoned auctioneers alike.

The vehicle was originally supplied to Herr Wolfgang Denzel in Austria in June 1989 and had its 1,500 km 'Free Service Coupon' honoured on 26/6/1989, and its next service completed on 20/4/1990, both by the supplying dealer. The car was then bought by an Italian collector who already owned an F40 and intended to convert this new car to an LM specification for track use. We are told that this conversion never took place so the car was effectively a static display vehicle for over 20 years, before being sold to the current owner by one of their clients, at which point the vehicle started its transformation back to the exceptional example you see today.

Carrozzeria Zanasi of 31, Via Farina Guiseppe in Maranello is a point of reference in classic Ferrari restoration. Their close collaboration with the factory began in 1964 when Enzo Ferrari was looking for a skilled artisan to help repair his accident-damaged racing cars and he met the young and talented Umberto Zanasi, and the partnership began. The Carrozzeria work closely with the Ferrari 'Classiche' Department, and prepare cars for the issue of Ferrari Certificates of Authenticity the special certification for all road-going Ferraris over 20 years old and all Ferrari competition cars. The facility is managed by factory trained technicians with experience in repairing Ferrari and Maserati according to Factory standards.

Having been lightly used for all those years, in 2016 the Ferrari was entrusted to Carrozzeria Zanasi and a full restoration to prepare it for Classiche certification was commissioned. This was duly carried out (details in the ownership file) and Classiche Certification granted and all, we understand, in exchange for over €300,000.

The car has only covered 592km since the restoration and during that process, the instruments were rebuilt including the odometer which was naturally 'zeroed', however, the mileage (verified) prior to that, was less than 3,000kms. Carrozzeria Zanasi has recently serviced the F40 in advance of the sale.
Should you be in the market for the best F40 you can find, we invite you to inspect this remarkable car and imagine that you will then, not have to look any further.