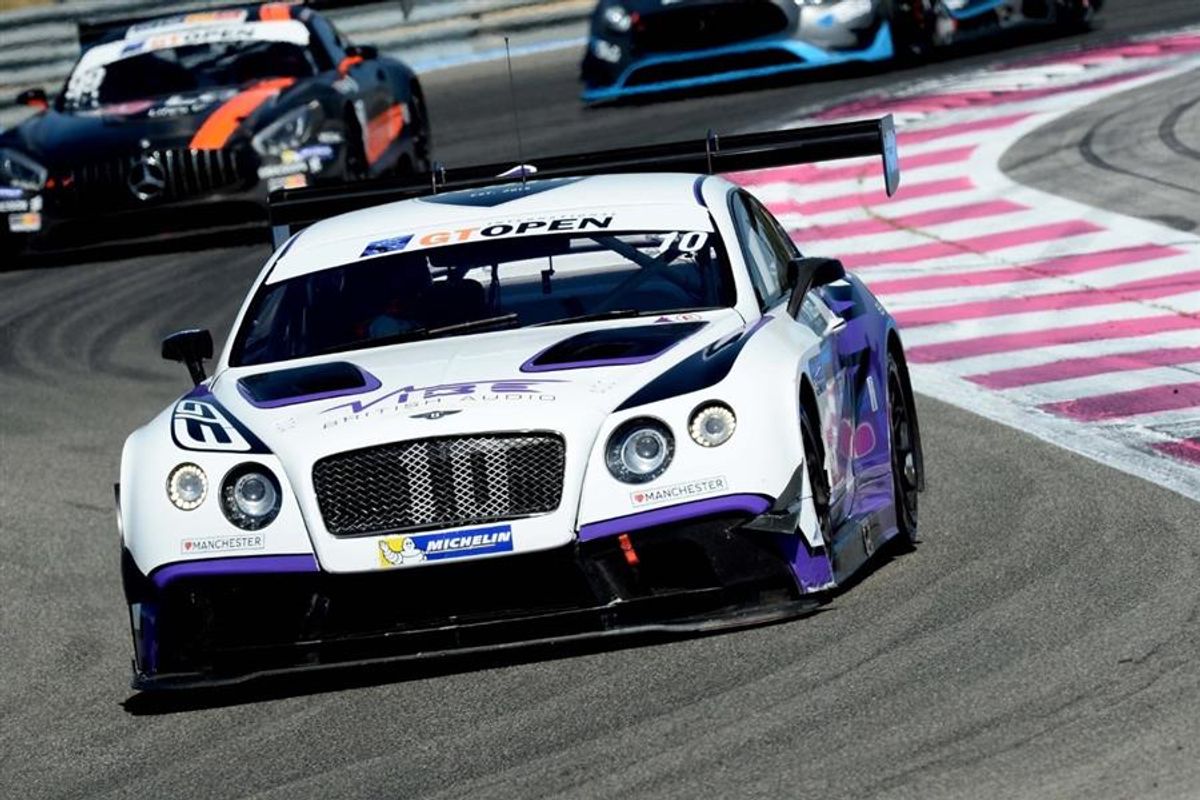 Five teams (representing Lamborghini, Ferrari, BMW and Lexus) within 14 points in close battle for the overall title
Strong British presence in the 26-car strong field, with Balfe Motorsport, Garage 59, Jordan Racing and FF Corse joined by Wessex Vehicles and the debuting LMM Mercedes
of Ratcliffe-Keen
Short lead in the other classes for Ferrari (Pro-Am) and Mercedes (Am) cars

The summer isn’t over yet, but holidays are! The International GT Open community is ready and anxious to resume track activity in one week from now. For the fifth round of the season, it will be crossing the Channel up to Silverstone, one of the legendary cradles of motor racing.

The British round of the series has now a good tradition of visiting the Grand Prix track in Northamptonshire and British fans have become over the years some of the most enthusiastic followers of the GT Open. They will have a lot to enjoy this year, as the series is living one of the most interesting and closely-fought editions in recent years, and the 26-car strong field looks tremendously top-quality.

The fight for the titles is entering its crucial phase and sees no less than five driver pairs in excellent position (within only 14 points) at the top of the standings. To further underline the situation, first position sees a tie. Thomas Biagi and Giovanni Venturini, who lead Lamborghini’s efforts with the Huracán of Imperiale Racing, have the same number of points (60) as Miguel Ramos and Mikkel Mac with the spirit of Race Ferrari 488. Two points behind, young guns Victor Bouveng and Fran Rueda are a close second, driving the BMW M6 of Teo Martín Motorsport. Together
with Albert costa – Philipp Frommenwiler (Emil Frey Racing Lexus RC F),  in fourth, they are the only ones to have won two races so far. In fifth position is the other Lexus of the Farnbacher family, confirming the excellent debut of new Japanese racer. It is to be noted that the Farnbacher brothers are now split in points, with Dominik ahead of Mario, who missed one event because of a clashing commitment.

The Pro-Am category also sees thrilling competition, with Marco Cioci-Piergiuseppe Perazzini (AF Corse Ferrari) having a minimal advantage (2 points) over the Balfe Motorsport McLaren of Shaun Balfe-Rob Bell. No doubt that the British outfit will be wanting to reverse the situation in their home race.

In the Am category, the game is even tighter, as the MS Racing Mercedes of Austrians Alexander Hrachowina-Martin Konrad has a single point gap over the sister AMG car of Portuguese Silva Sardinha-Coimbra Da Costa (Sports&You), the reigning champions, while the Kaspersky Motorsport Ferrari of Alex Moiseev-Davide Rizzo is just two points from the top.

Needless to say, Silverstone is going to see some hot action in all the classes! No surprise then that some of the top contenders are furbishing their weapons. Imperiale Racing will bring to the UK round a third car, with a top line-up to be revealed mid-next week. This will bring the number of Huracans up to five, including the Ratón Racing (Liberati-Ling) one and the car of FFF Racing for Hiroshi Hamaguchi and former F.1 star Tonio Liuzzi.

As expected, the British representation will be conspicuous in the Midlands, on top of regular contenders which include the McLarens 650 S of Balfe Motorsport, already mentioned above, and Garage 59 (with Michael Benham-Duncan Tappy as the local hero pair), the FF Corse Ferrari 488 of Ivor Dunbar-Johnny Mowlem, and the Jordan Racing Bentley of Jordan Witt-Michael Meadows, which rejoins the series after the engine blow at Ricard. Among drivers, Tom Onslow-Cole will be again sharing with Velentin Pierburg the SPS Mercedes.

Back for a second seasonal outing is the Wessex Vehicles Lamborghini Gallardo REX. The enthusiastic Salisbury-based outfit appeared in Spa earlier this season but had to withdraw after Race 1 because of a chassis issue. The machine is now perfectly fit to attempt to repeat last year’s stunning win (in Race 1) and will be entrusted to Craig Dolby and Riki Christodoulou.

Silverstone will also see the debut of Lee Mowle Motorsport (LMM), with its Mercedes AMG, in view of a possible full campaign next year. The Wimbledon-based squad enters young Welshman Ryan Ratcliffe and GT star Phil Keen, who will be doing his come-back to a series that has seen him as a top contender in 2015-16.
Among non-British contenders, there are also some facts to be noted. The Solaris Aston Martin is back, after intense testing during the summer, and so are to their respective seats Andrea Caldarelli (SF Racing), Nonô Figuereido (Sports&You) and Allam Khodair (Drivex), while for the second time this year António Félix Da Costa will be the stellar driver in the Teo Martín BMW #51, alongside Lourenço Beirão.
GT Open’s Silverstone weekend (which will start with an optional 2-hour private testing session on Friday morning) will also see in action, as customary, the Euroformula Open, with the Radical European Master bringing the additional excitement of close sportscar racing.

All the action can be followed by fans at home thanks to live coverage by major national broadcasters in key countries such as UK (BT Sport), Italy (Sportitalia), Spain (Teledeporte RTVE), Portugal (Sport TV), Russia, CIS countries and Baltics (Poverkhnost Sport), Poland (PolSat Sport TV) and Central Europe (Digisport in CZ, SK, HU and RO), among others. In addition, international coverage is ensured by Motors Trend on demand. Races are also livestreamed in English and Italian with commentary by Ben Evans and Marco Cortesi, respectively, on our website www.gtopen.net.