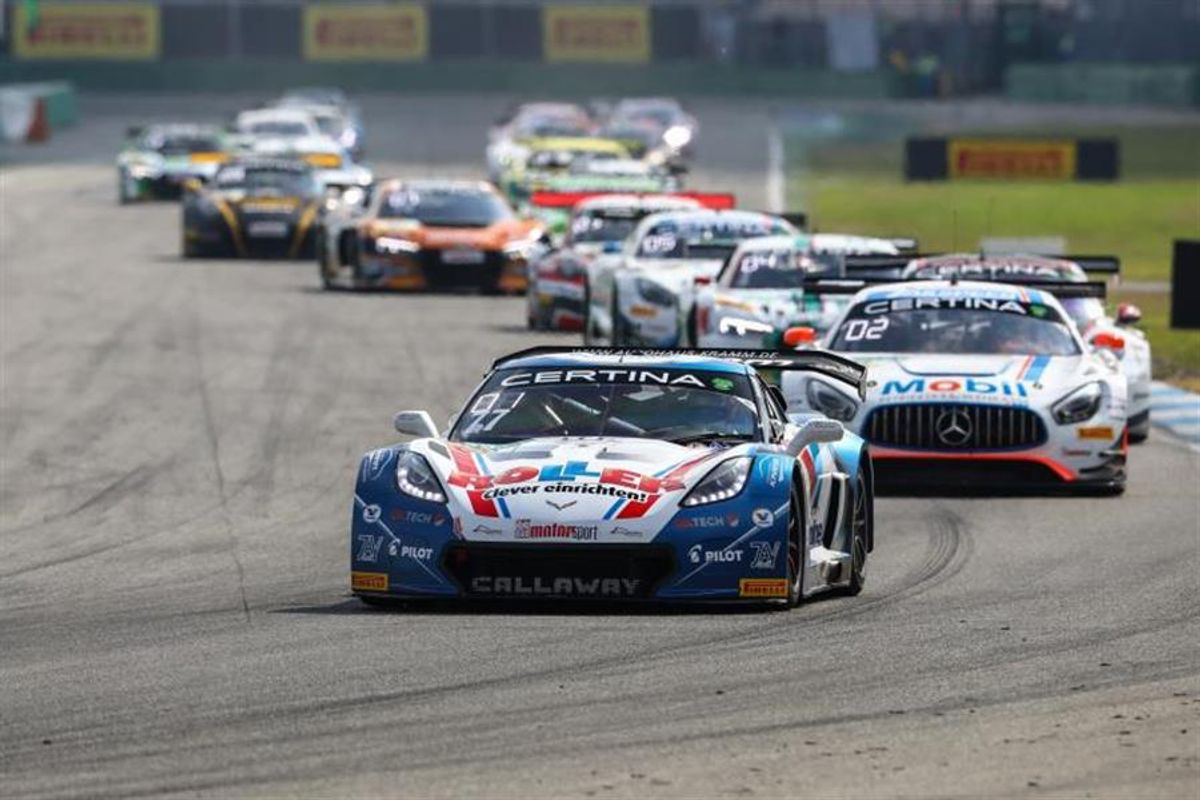 It's second time lucky for Jules Gounon (22, FRA). The Corvette driver, who contested his first ADAC GT Masters season last year, won the Saturday race at Hockenheim from pole position to lift the Super Sports Car League championship trophy at the second attempt. "I am ecstatic about winning the title," said the Frenchman. "It's the first I've ever won in my motor racing career. I had some unfinished business at Hockenheim after my accident at the track on the closing weekend of the 2016 campaign, so it's great that I've managed to do it here."

The Frenchman inherited the motorsport gene from his father, Jean-Marc, who even made it to Formula 1 driver at one stage in his career. Nevertheless, Gounon senior was in no hurry to get Gounon junior into a cockpit too early. "It was mainly a question of money," explains Jean-Marc Gounon. It was only at the age of 15 that Jules got a kart for Christmas and - as a relatively late starter - began competing in his first races. From there, he went on to accumulate his first professional motorsport experience in French single-seater series and in the Porsche Carrera Cup France. Through longstanding contacts with Callaway Competition, Jean-Marc Gounon eventually introduced his son to the Corvette team just before the 2016 ADAC GT Masters season was about to get underway at Oschersleben. His successes in the ADAC GT Masters have brought Gounon wider recognition in the motorsport world. Towards the end of July, he was signed by Audi for his first deployment as a works driver and member of the Audi Sport Team Saintéloc squad. Together with fellow ADAC GT Masters drivers Markus Winkelhock (37, DEU) and Christopher Haase (29, DEU), he won the 24-hour race at Spa. Gounon is a big cycling fan and between race weekends goes for long rides on his racing bike. These include some of the most notorious sections of the Tour de France - in summer, he rode up to the summit of the legendary Mont Ventoux, a ride of approximately 20 kilometres climbing 1,600 metres in the process.

2017 was only Gounon's second season in the ADAC GT Masters. He and Callaway team-mate Daniel Keilwitz (28, DEU) were in contention for last year's title right up to the final race at Hockenheim, but an accident put paid to their dreams. So the objective for this year was unambiguous. "We intend to win the title," said Gounon right at the start. But the first setback of the season came as early as the first race at Oschersleben when the Frenchman was involved in a collision and ended up in the gravel pit. Result: zero points. But Gounon, once again partnered by Keilwitz, was not going to be blown off course by an incident like that.

Finishing second in the Sunday race, they picked up their first vital points. And when they then claimed their first victory of the season at the Red Bull Ring, it was enough to take the drivers of the number 77 Corvette to the top of the championship table for the first time. By virtue of impressive consistency, Gounon continued to build his lead until it reached 43 points. Even when co-driver Keilwitz had to pull out of three race weekends after breaking his leg, Gounon refused to be knocked off his stride. On the contrary: at Zandvoort, in the very first race partnered by substitute driver Renger van der Zande (31, NL), Gounon secured his second win of the season. Although title rivals were able to whittle away his massive lead over the course of the next races at the Nürburgring - where Keilwitz was replaced by Albert Costa (27, ESP) - and at the Sachsenring to a less formidable 15 points going into the season finale, Gounon and the now returned Keilwitz settled the matter with a start-to-finish win at Hockenheim.

"Winning the title is truly incredible," said Gounon, who became only the second Frenchman after Dino Lunardi (2011) to be crowned ADAC GT Masters champion. "The amazing thing is that I have now won the championship with the very same Corvette in which I had the accident here at Hockenheim in 2016. That's because Callaway rebuilt the car, which is quite a special story in itself. The key to our success has been team spirit - we are like one big happy family. Even in difficult situations, we always stick together. The second important factor was our consistency, because we have been notching up the points on a regular basis." In addition to lifting the trophy in the general classification, Gounon has also emerged triumphant in the Junior class for drivers under the age of 25.

Ernst Wöhr, team boss at Callaway Competition, is full of praise for his protégé: "The title means a lot to us. Never before has the standard of competition in the ADAC GT Masters been as high as this year. To win here is the ultimate in GT racing. I got to know Jules in the run-up to last season, and we agreed to do a test drive. He immediately made a big impression on us. He is unbelievable. He's about to complete only his second season with us, but he just keeps getting better from race to race. His development is by no means complete, but I'm convinced he has a great future ahead of him."