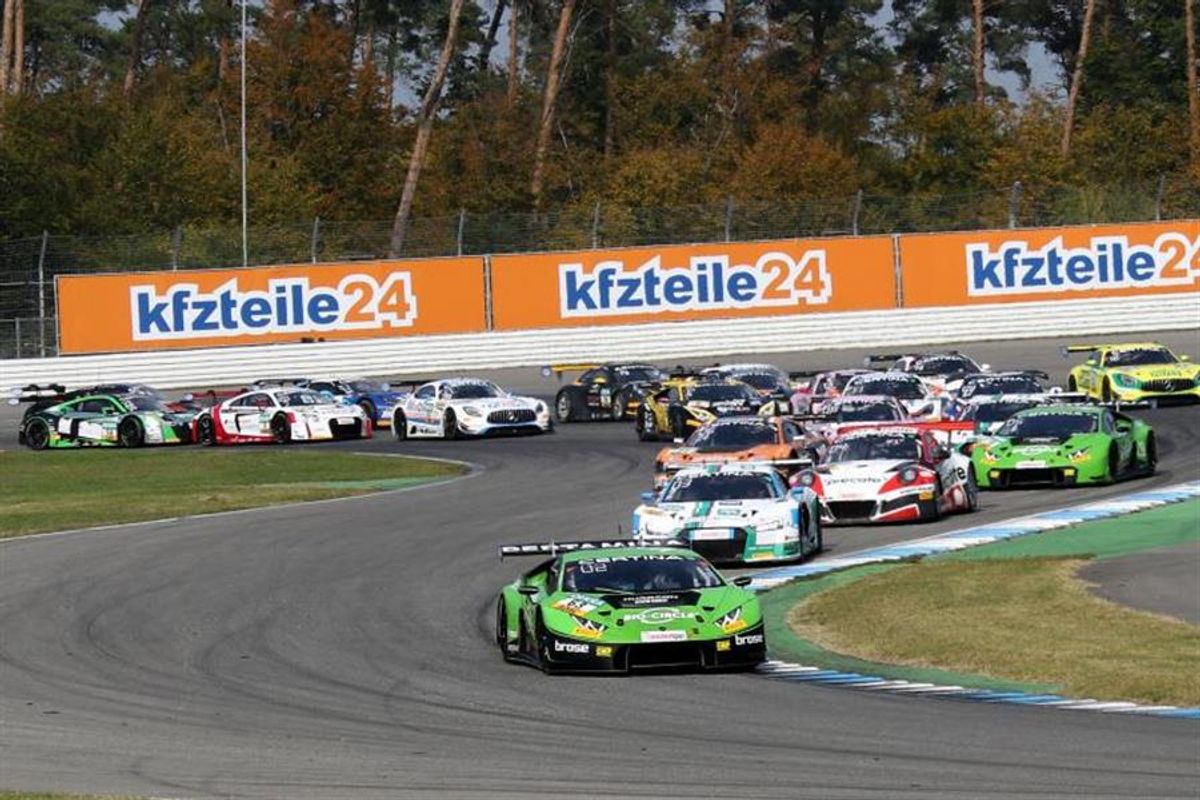 The ADAC GT Masters now goes into its winter recess, after Hockenheim hosted one of the most spectacular races of the entire season. Rolf Ineichen (39, CH) and Christian Engelhart (30, DEU, both GRT Grasser Racing Team) driving a Lamborghini Huracán won Round 14 of the campaign. Jules Gounon (22, FRA), crowned champion yesterday, and co-driver Daniel Keilwitz (28, DEU) finished runners-up, which was enough to secure the team title for Callaway Competition and second place in the drivers' championship for Keilwitz. The Audi pairing of Jeffrey Schmidt (23, CH) and Christopher Haase (29, DEU, both Montaplast by Land-Motorsport) took third place. "I can hardly believe it," said race winner Ineichen after crossing the finish line. "This has been the toughest race of my entire career. We had to keep battling away until the very last minute."

Key facts, Hockenheimring, Round 14 of 14

Thrilling four-way tussle for the win

Pole-sitter Philipp Eng (27, AUT, BMW Team Schnitzer) driving the only BMW in the field dominated the first stint of the final race and led until the driver handover, after which things got hectic up front. Rolf Ineichen took over the Lamborghini from partner Christian Engelhart in second place and proceeded to put pressure on Nick Catsburg (29, NL) who had taken over in the cockpit of the BMW M6 GT3. Ineichen made multiple attempts to get past the lead car. Meanwhile, Porsche driver Robert Renauer (32, DEU, Precote Herberth Motorsport) and new champion Jules Gounon were closing in on the two race leaders. Renauer overtook Ineichen a short time later and attacked the BMW in P1 over the final few laps. The lead changed hands several times between the BMW and the Porsche until the very last lap when there was a contact between the two cars on the exit from the hairpin. While Catsburg was able to continue and take the chequered flag in P1, Renauer dropped back as the result of a spin. Immediately after crossing the line, however, Catsburg was handed a 30-second time penalty for the contact with Renauer, and the BMW pair were classified 13th. That gave Engelhart and Ineichen, who had kept the Corvette of newly crowned champion Gounon behind them, their second win of the season. Ineichen also secured victory in the Trophy class for amateur drivers. For GRT Grasser Racing Team, it was a third win of the season.

Following their victory on Saturday, Gounon and partner Daniel Keilwitz again finished on the podium, this time for finishing second overall and first in the Junior class. To get there, they had to mount a spectacular charge through the field from 14th on the grid. Keilwitz had already moved the Corvette up into fourth place by the time the driver handover came around. P2 in the race was enough to secure the team title for Callaway Competition, an achievement over and above their triumph in the 2017 drivers' championship and Junior classification. Keilwitz, who had to miss six races because of a broken leg, still managed to come in second in the drivers' championship behind team-mate Gounon.

Third place went to the Audi of Jeffrey Schmidt and Christopher Haase ahead of the fourth-placed Porsche duo of Robert Renauer and Sven Müller (25, both Precote Herberth Motorsport) who had looked favourites to win at one stage. Mike David Ortmann (17, DEU) and Frank Stippler (42, DEU, both BWT Mücke Motorsport) in an Audi finished fifth, their best result of the season. Ezequiel Perez Companc (23, RA) and Mirko Bortolotti (27, ITA) were sixth in the second Lamborghini fielded by GRT Grasser Racing Team after being spun by an Audi during the opening laps of the race.

Mathieu Jaminet (22, FRA) and Michael Ammermüller (31, DEU, both KÜS Team75 Bernhard) finished seventh in their Porsche 911. Next to take the chequered flag were last year's champions Connor De Phillippi (24, USA) and Christopher Mies (28, DEU, both Montaplast by Land-Motorsport) in an Audi. Completing the Top Ten were Luca Stolz (22, DEU) and Luca Ludwig (28, DEU, both team Zakspeed) as the best of the Mercedes AMG contingent, followed by Dennis Marschall (21, DEU) and Patric Niederhauser (25, CH, both Aust Motorsport) in another Audi R8.

Christian Engelhart (GRT Grasser Racing Team, Lamborghini Huracán GT3):
"What a fantastic race! We arrived at Hockenheim exceptionally well prepared and had a perfect car right from the first session. I put in a perfect qualifying lap. In the race, I stayed close to Philipp Eng until the change of driver. Then, we tried to get past the BMW by going for an early pit stop, and that almost worked for us. Nick Catsburg didn't have the pace in the second half of the race, which is why he was holding up the cars behind. The way that Rolf drove so steadily during that frantic final phase and the fact that we're now celebrating this win is immense."

Rolf Ineichen (GRT Grasser Racing Team, Lamborghini Huracán GT3):
"I'm sublimely happy. I feel a bit sorry for Robert Renauer who had a great race and would also have deserved the victory. I probably pushed too hard at the start of my stint, trying to get past the BMW. As a result, the rear tyres were extremely degraded towards the end. It wasn't easy keeping the Corvette behind me, especially going into the hairpin."