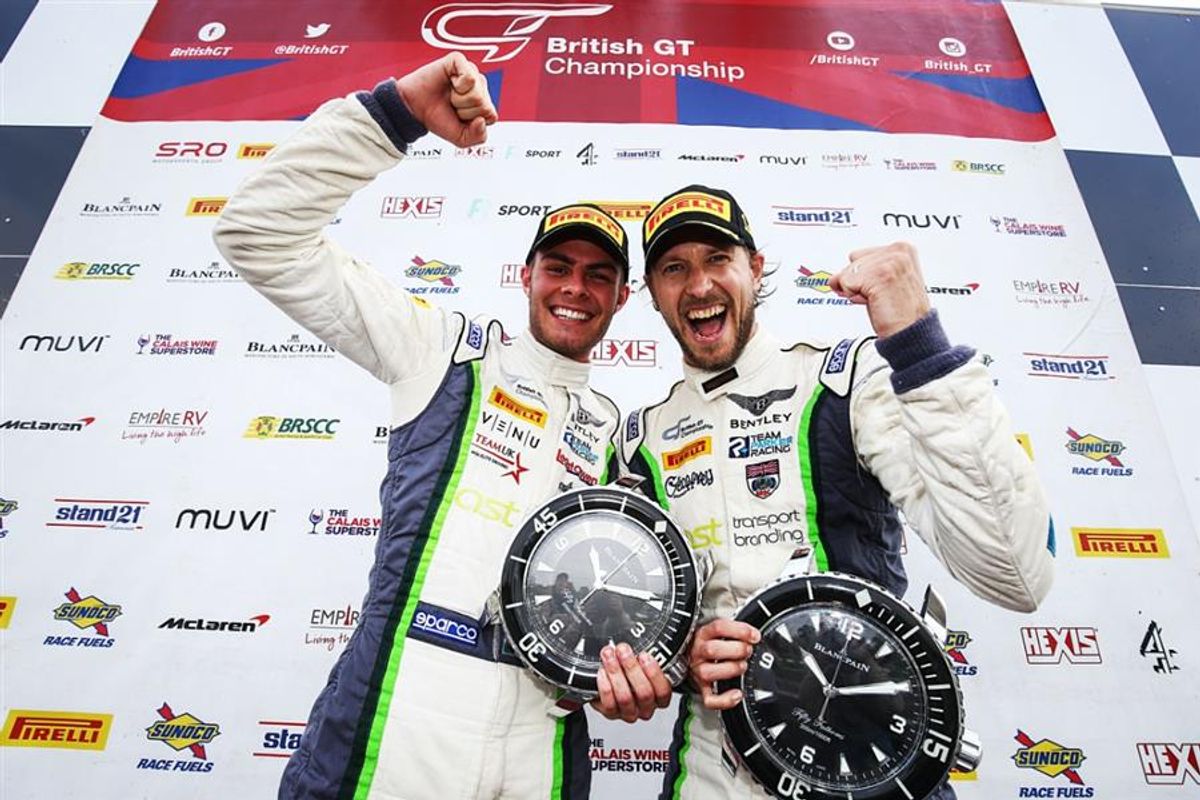 Welsh sporting superstar Seb Morris and team-mate Rick Parfitt Jnr have won the 2017 British GT Championship title after an action-packed final round of the season at Donington Park Grand Prix Circuit on Sunday, 24th September, where the duo claimed their fourth podium of the campaign.

Driving the No.31 Bentley Continental, the Team Parker Racing duo actually wrapped-up the coveted title with a fourth place finish in the two-hour spectacular at the Leicestershire track but, post-race, the Lamborghini Huracan of Jon Minshaw and Phil Keen was excluded for a yellow flag infringement.

Elevating BRDC Superstar and MSA Team UK driver Morris and Parfitt Jnr into third position in the amended result, with chief rivals Minshaw and Keen stripped of their top three race finish the Bentley team-mates have won the title by a margin of 33 points.

Capping a truly sensational campaign, which included three outstanding race victories during the year, Morris and Parfitt Jnr also made history too with the championship victory marking the first in British GT for Crewe manufacturer Bentley.

Added to that, the success marks the first in GT3 for Leicestershire based Team Parker and Morris and Parfitt Jnr also go into the record books as champions in the 25th anniversary season of the UK’s premier endurance racing category.

The team-mates went into the final weekend leading the standings by 10.5 points, but with a 20 second ‘success penalty’ to serve in the mid-race driver change pit-stop, coming after their victory during the previous round at Brands Hatch, winning the title was far from a foregone conclusion.

“It feels unbelievable and very emotional”, said Morris after the race, “I’ve got to say a huge thank you to Team Parker and M Sport who have done an incredible job alongside Bentley this year, we’ve really put all the links in the chain together. Rick has done an amazing job, he hasn’t made a mistake all year, and I haven’t done a bad job myself! We all deserve this, everyone has worked so hard.

“It was an interesting race, that’s for sure, but in the end we did what we needed to do. I really want to say thank you to my family and all of my sponsors, Ast Transport Branding, Eddie Stobart, Saxon Air and, in particular, Sue Harris of Legat Owen who was my first ever sponsor and has supported me ever since. This title is for all of them.”

Preparing strongly ahead of qualifying with the fourth fastest time in opening practice and the seventh best time in session two, the Team Parker Racing drivers headed into the grid-determining session on Saturday, 23rd September, in good form and Parfitt ended the ‘Am’ session second fastest with a lap of 1m28.330 seconds (101.37mph).

In the ‘Pro’ run, Morris ended up with a best lap of 1m27.840 seconds (101.94mph) having had his quickest effort of the session removed due to a track limits infringement. He, therefore, concluded the period seventh on the times which – combined with Parfitt Jnr’s fastest – put the No.31 Bentley fourth on the grid for the finale only 0.061 seconds shy of title rivals Minshaw and Keen.

With a mouthwatering battle in store with the championship contenders side-by-side on row two at the rolling start, Parfitt Jnr took the opening hour of racing and although edged back to fifth place on the run into the first corner he soon got into his rhythm.

Then, in a dramatic twist on lap two, a spin for Minshaw at the Esses from second place enabled Parfitt Jnr to move up into fourth again. Swarming all over the No.6 Lamborghini of Liam Griffin, which leap-frogged the Bentley at the start, Parfitt Jnr managed to make the breakthrough on lap 11 after overcoming some stern and robust defence.

Immediately pulling away, he set about closing down the leading pair of Aston Martins and after reeling off some superb laps Parfitt Jnr was with them by lap 27. With no changes forthcoming, when the race clock reached the one-hour mark Parfitt Jnr pitted to hand over to Morris.

After the extra-long stop, due to the success penalty, Morris held fifth place when the race order settled while Keen – having taken over from Minshaw – was third. Determined to close down the big gap to the cars ahead, Morris did so and on lap 55 his hard work was rewarded when he took fourth.

With Keen the next target, albeit a long way up the road, Morris knew he didn’t need to try and catch his rival to win the crown. In the end, fourth place gave the Welsh ace his fourth car racing title before the Lamborghini’s exclusion only added another trophy to his cabinet. Notably, Parfitt Jnr has now become the only driver to win the British GT3 and British GT4 titles – the latter in 2013.