Dovizioso wins Duel of Champions with Marquez at Motegi MotoGP 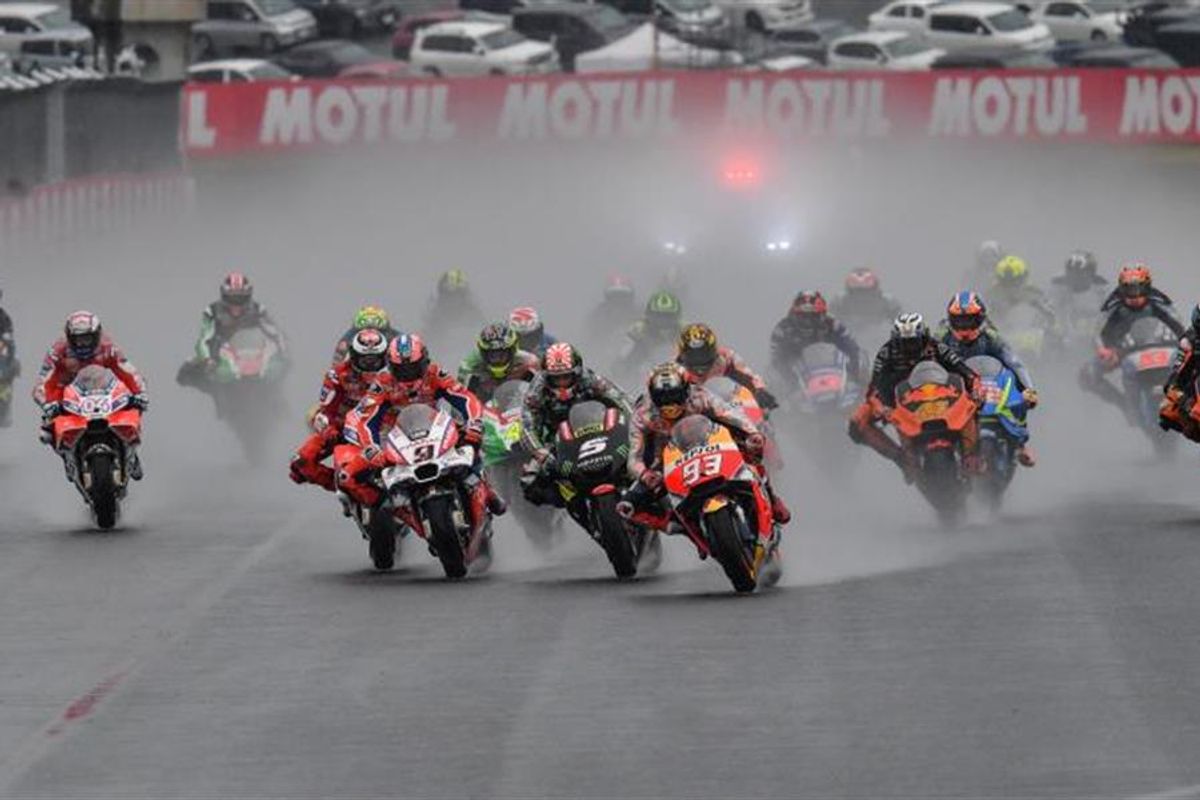 The two men at the top stage a historic duel in the rain-soaked Japanese GP, with everything on the line

In pouring rain at the Twin Ring Motegi, Andrea Dovizioso (Ducati Team) and Marc Marquez (Repsol Honda Team) staged one of the greatest MotoGP duels of all time, putting everything on the line down to the final lap and the final corner. And despite the best efforts of the reigning Champion, it was Andrea Dovizioso who emerged victorious from ‘Victory’ corner in Japan – taking his fifth win of the season, the seventh of his career, and one of the most spectacular in history. Marquez was an incredibly close second for his 100th career podium, with Danilo Petrucci (Octo Pramac Racing) completing the podium.

It was Marquez took the lead off the front row, with Jorge Lorenzo (Ducati Team) soon pouncing on the first lap to take second and then take over in the lead. Marquez was followed by Petrucci and Johann Zarco (Monster Yamaha Tech 3), with Dovizioso staging a stunning start to tag on the back. Marquez then fought back as Lorenzo moved back slightly, before Petrucci struck at the front and the trio who would head the remaining laps was decided: Petrucci, Marquez, and Dovizioso.

As the laps ticked down, the two title contenders remained locked together and Petrucci found some clear air in the lead. But with 12 laps to go Marquez made his first move to take over, with ‘DesmoDovi’ then through on his compatriot to keep close company with the Championship leader. They pulled away, and the stage was set.

With six laps to go, Dovizioso attacked at Turn 6, and the cat and mouse continued. Marquez then hit back with a brutal pass in Turn 3 with three laps to go, and the fuse was lit. Dueling it out with some of the most spectacular racing of the season – and in the pouring rain – it seemed Marquez was holding the cards as the final lap approached.

Pushing hard to catch the race and Championship leader, the gap was hovering just over half a second for Dovizioso, until Marquez suddenly suffered a moment at Turn 8 and the Ducati was back on him. The Italian struck to take the lead soon after and prepared himself for the aptly-named victory corner - knowing the number 93 was close behind and undoubtedly with Austria on his mind.

The door didn’t prove closed for Marquez as he shot up the inside, but Dovizioso was prepared for the move and kept it together as the Repsol Honda headed wide. Almost neck and neck over the line, it was ‘DesmoDovi’ who took the victory in a duel that will go down in history – and he cuts the gap to 11 points at the top.

Behind the trio on the rostrum it was a stunning ride for Andrea Iannone (Team Suzuki Ecstar) into fourth, as the Italian picked his way through from P12 on the grid as was able to close in on his teammate Alex Rins, then getting past him in the latter stages. Rins was top rookie after his own display of brilliance, however, earlier shadowing Zarco and then moving through as the Frenchman faded.

After dropping back after a stunning start, Jorge Lorenzo was able to move back past those ahead of him to cross the line in sixth for another good haul of points – getting back Aleix Espargaro (Aprilia Racing Team Gresini) as his final victim, with the Spaniard coming seventh. Zarco faded in the latter stages to head home in P8, ahead of a difficult day for Maverick Viñales (Movistar Yamaha MotoGP). Viñales is now 41 points off Marquez at the top of the table.

Loris Baz (Reale Avintia Racing) completed the top ten as he sliced through in the rain, with Pol Espargaro (Red Bull KTM Factory Racing) taking another top result for the Austrian factory in P11. In twelfth, it was wildcard Yamalube Factory Racing rider Katsuyuki Nakasuga – 2017 Suzuka 8H winner and former MotoGP™ podium finisher – as the Japanese veteran impressed as ever.

Now the Championship heads for the legendary Phillip Island, with the gap at the top now cut down to 11 points and three rounds remaining. Motegi was a duel that will go down in history, as will 2017. But with whose name engraved on the trophy?