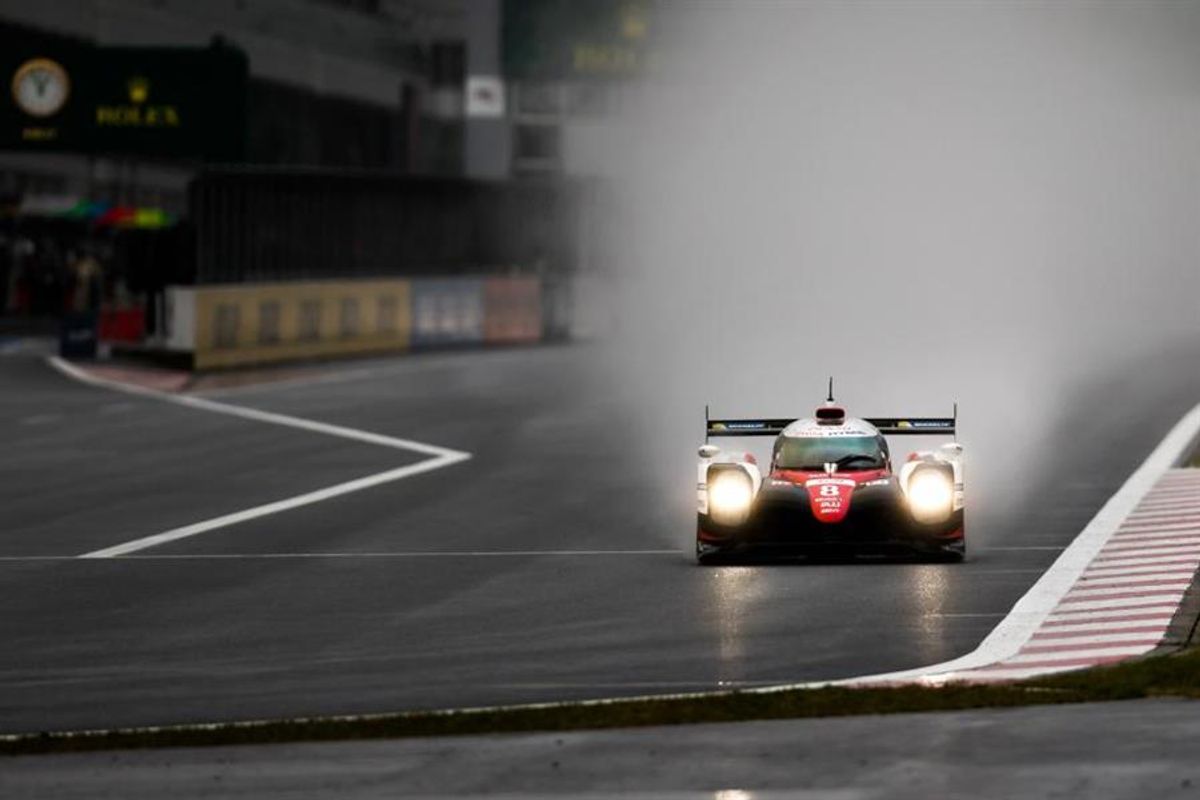 The rain that has been a significant feature of the 6 Hours of Fuji weekend since Friday morning caused disruption during the race with Round 7 of the 2017 FIA World Endurance Championship cut short after four and a half hours of running, with seven safety car periods, one Full Course Yellow and two red flags.

The no8 Toyota TS050 Hybrid of Kazuki Nakajima, Sebastien Buemi and Anthony Davidson scored a home win for the Japanese manufacturer, their first victory since Round 2 in Belgium. It was a double celebration for Toyota as the no7 TS050 finished in second place ahead of the two Porsche 919s led by the no1 car.

Ferrari also took the challenge to Porsche after the two 911 RSRs were dominant in the wet conditions in Free Practice and Qualifying. The no51 AF Corse F488 of James Calado and Alessandro Pier Guidi took their third victory to take the lead in the FIA GT World Endurance Driver’s Championship and help extend Ferrari’s lead in the manufacturer’s title race. Porsche finished 2nd and 3rd, the German manufacturer’s best result this season.

In LMP2 the no31 Vaillante Rebellion Oreca of Bruno Senna, Nico Prost and Julien Canal finished ahead of the rest of the nine car field in an exciting drawn out battle with the no36 Signatech Alpine A470 and the no38 Jackie Chan DC Racing Oreca-Gibson.

In LMGTE Am it was a Ferrari 1-2 with a debut victory for the no54 Spirit of Race F488 of Thomas Flohr, Francesco Castellacci and Miguel Molina.

With water laying on the track, steady rain falling from the skies and misty conditions at Turn 1, the 6 Hours of Fuji began behind the safety car for the first 15 minutes of the race. Once the race went green the no2 Porsche of Earl Bamber took advantage of the pole position to pull away from the no1 car of Andre Lotterer.

Sebastien Buemi in the no8 Toyota started to challenge Lotterer for second and the Swiss driver made his move at T10. In the slippery conditions the two cars touched as the Toyota went ahead and one of the Porsche’s dive planes broke off the car. Lotterer continued but the damage did affect the handling of the Porsche and the no7 Toyota of Kamui Kobayashi was also able to slip by.

The no13 Vaillante Rebellion of Nelson Piquet Jr spun at the first corner from pole position, dropping the Brazilian down the order and allowing his teammate Bruno Senna to take the lead in the no31 Oreca. The two Jackie Chan DC Racing Orecas were behind Senna, with Alex Brundle in the no37 Oreca leading the chase.

The no36 Signatech Alpine of Nicolas Lapierre was forcing its way back up the field in the tricky conditions, passing the no38 Oreca of Oliver Jarvis and then getting on terms with Alex Brundle’s Oreca. The two battled and swapped places over the next two laps before Lapierre got past and made the move stick.

In LMGTE Pro the no91 Porsche 911 of Richard Lietz made a good start from pole with Harry Tincknell in the no67 Ford just behind. Michael Christensen in the no92 Porsche also made a good start moving up two places on the opening fast lap of the race. The no61 Clearwater Racing Ferrari of Keita Sawa was leading the LMGTE Am class, the Japanese driver using his local knowledge to fend off the attentions of Francesco Castellacci in the no54 Spirit of Race Ferrari.

With 50 minutes of the race run the weather started to close in again with heavy rain and mist reducing visibility. The second safety car of the race was deployed and the field bunched up behind the Audi R8 for the next 30 minutes before Race Control declared a Red Flag.

Track conditions improved and the race resumed 35 minutes later with the no2 Porsche pitting and the no8 Toyota taking over the lead of the race.

The no67 Ford GT of championship leader Andy Priaulx was handed a 1 minute stop and go penalty after the British driver missed the red light at the end of the pitlane. This was the first of a couple of mishaps. Later in the race the Ford GT collided with the race leading Porsche of Kevin Estre, which resulted in a right rear puncture that pitched the car into the barriers under braking at Turn 1. The car was recovered under a Full Course Yellow period. The Ford was repaired and finished the race 8th in class.

The no31 Rebellion of Bruno Senna was being caught by Lapierre’s Signatech Alpine for the lead of LMP2 and it looked like the Frenchman was going to catch the lead car but a spin at the final corner dropped the Alpine A470 back into the clutches of the 3rd placed no24 CEFC Manor TRS Racing Oreca of Ben Hanley. The no37 Jackie Chan DC Racing Oreca of Alex Brundle retired with a suspected alternator failure.

A third Safety Car period was declared when the weather closed in again but this time racing resumed 25 minutes later As the race reached the half way point the no8 Toyota was still leading the race from the no1 Porsche of Nick Tandy. The no7 Toyota of Jose-Maria Lopez was challenging Tandy for third while the championship leading no2 Porsche of Brendon Hartley was a distant fourth.

The two Ferraris were leading with the no51 F488 of Alessandro Pier Guidi 6 seconds ahead of Davide Rigon in the no71 car.

Just past the third hour the weather closed in again bringing out the safety car again for 20 minutes. At the restart the no13 Vaillante Rebellion of Mathias Beche and the no25 CEFC Manor of Jean-Eric Verne clashed fighting for track position and the Rebellion smashed into the wall at T3. Beche was OK but the car was badly damaged, so the Safety Car came back on track once again for another 15 minutes.

With two hours remaining the no91 Porsche of Fred Makowiecki was leading from the no51 F488 of James Calado with Calado getting the jump on the Porsche at the restart following the Full Course Yellow to recover the no67 Ford GT.

The no8 Toyota of Kazuki Nakajima was leading by 16 seconds from the no7 TS050 of Mike Conway, with the no1 Porsche of Nick Tandy just 1.3 seconds behind but the no8 had completed just two stops compared to three for the other two cars.

With 1 hour and 40 minutes remaining the sixth Safety Car was deployed due to the weather and ten minutes later the second red flag was given. All the cars lined up on the start finish straight and waited to see if the weather would allow the race to be concluded under green flag conditions. After another hour and 20 minutes the race was declared and the cars were led around for the final time by the safety car.

The 1-2 for Toyota has closed the gap to Porsche to 58.5 points with 88 points still available from the two remaining races in Shanghai and Bahrain. The championship leading no2 Porsche crew of Brendon Hartley, Timo Bernhard and Earl Bamber finished 4th, one lap behind the Toyotas, and now lead by 39 points, with 172 points to 133 points for Sebastien Buemi and Kazuki Nakajima.

The victory for the no51 Ferrari has propelled James Calado and Alessandro Pier Guidi into the lead of the GT FIA World Endurance Driver’s Championship, the Anglo Italian pairing on 120 points, 5 points ahead of Fred Makowiecki and Richard Lietz. Ferrari extend their points lead to 47 points, with the Italian manufacturer on 238 points with Porsche in second on 191.

The gap in the LMP2 standings has closed to just 10 points with the 3rd placed no38 Jackie Chan DC Racing crew of Ho Pin Tung, Oliver Jarvis and Thomas Laurent on 145 points with the no31 Vaillante Rebellion Oreca of Bruno Senna, Nico Prost and Julien Canal on 135 points.

The LMGTE Am Team Championship is now led by the no61 Clearwater Racing Ferrari on 149 points with the no77 Dempsey-Proton racing Porsche in second on 147 points and the no98 Aston Martin Racing Vantage on 146. The drivers classification is led by Christian Ried, Marvin Dienst and Matteo Cairoli on 141 points, with Mathias Lauda, Paul Dalla Lana and Pedro Lamy on 140 points.

Round 8 of the 2017 FIA World Endurance Championship will take place on Sunday 5th November in China with the 6 Hours of Shanghai.