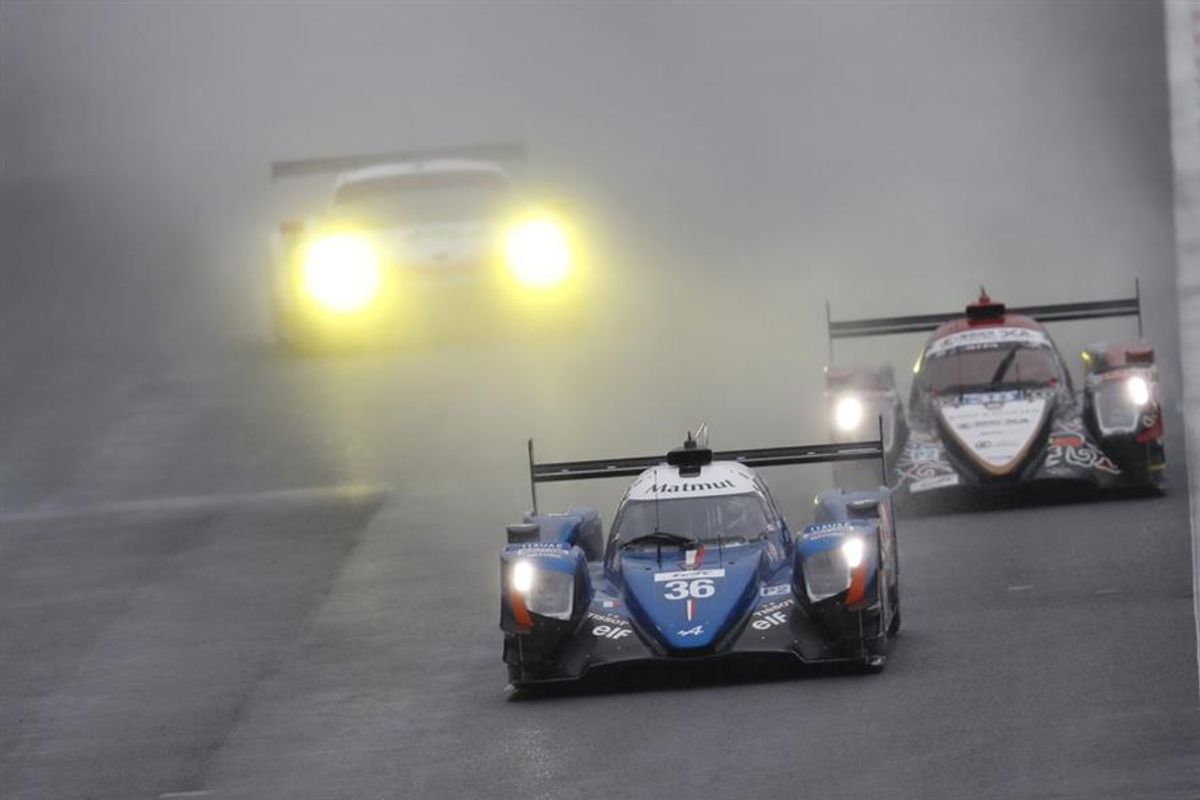 Signatech Alpine Matmut finished second in the LMP2 class at the 6 Hours of Fuji.
Nicolas Lapierre, André Negrão and Gustavo Menezes were unable to convert their domination into a deserved win, with the race significantly disrupted by the weather conditions.
Despite this frustrating situation, the no.36 crew closed the gap to the championship leader with two races left to go.

The teams began their Japanese weekend in typical conditions for this time of year, with rainy weather during free practice. Tasked with qualifying the no.36 Alpine A470 on a wet track, Nicolas Lapierre and André Negrão set the fourth best combined time.

It was still raining on Sunday at the start of the 6 Hours of Fuji. After a quarter of an hour spent behind the safety car, the race got underway for real. At the first corner, Nelson Piquet (no.13) spun in front of Nicolas Lapierre, who only just managed to avoid him. With one lap gone, the Alpine was running in fifth place in the LMP2 category.

Very comfortable despite the conditions, Nicolas began a superb fightback, moving past James Rossiter (no.26), Oliver Jarvis (no.38) and Alex Brundle (no.37) successively. He then closed up on Bruno Senna (no.31), but the safety car came back out due to the fog that had engulfed the Japanese track. With an hour of the race completed, Nicolas and his rivals took advantage of the safety car period to come into the pits for their first stop.

With conditions not improving, the red flag was shown after 1 hr 20 mins of the race. At this point, the no.36 Alpine was running in third position in the LMP2 class. After a half-hour interruption – during which the six-hour race clock continued to count down – racing resumed and Nicolas Lapierre wasted no time in reclaiming second place. Regularly improving the fastest race lap, the Alpine driver gradually closed on the leaders.

During another safety car period, Nicolas handed over driving duties to André Negrão. Once the Brazilian was in the car, the "SC" boards were shown several more times, so that the marshals could remove the cars that had gone off the track. Thanks to an aggressive strategy, involving pitting before the other leading contenders, the Signatech Alpine Matmut moved into the lead on the 85th lap.

Following a sixth safety car period, the 6 Hours of Fuji got underway again with just over two hours of the race left. André Negrão set off in pursuit of Ho-Pin Tung (no.38), eventually managing to reclaim second place with a fantastic overtaking move. As he closed in on the leader, the race was once again red-flagged due to the fog.

Following a very long wait, race control was preparing to release the field onto the track for the final ten minutes, but the lack of visibility put paid to these vague hopes and the cars returned to parc ferme without even taking the chequered flag.

The no.36 crew, which would in all likelihood have benefited from its strategy of not coming to the pits again before the end, "only" finished as runners-up. Although he didn't get on track in the Alpine A470, Gustavo Menezes made sure he joined in the podium celebrations, soaking his overalls in champagne!

In the overall standings, Signatech Alpine Matmut made up three points on the leader and remains in the title race. After what was a frustrating race for much of the field, the FIA WEC will be back in three weeks' time for the penultimate round of the season, held at the Shanghai International Circuit (5 November).

Bernard Ollivier, Alpine Deputy Managing Director
"What an incredible, incident-packed race: six safety car periods, a ‘Full Course Yellow’, two red flags… First and foremost, I would like to congratulate race control and the organisation, who did all they could to ensure this race could go ahead, and all of the drivers, who produced some very high quality performances given the extreme conditions. But the underlying feeling is one of disappointment. Our car was the fastest, our drivers were extraordinary and the team did a great job in constantly adapting its strategy to the conditions. If the race had been run over the full six hours, we could have made it to the end without making another pit stop and would in all likelihood have won the race. Despite this stylish performance, the result therefore falls short of what we deserved. In any case, I'm very proud of the Signatech Alpine Matmut team."

Philippe Sinault, Signatech Alpine Matmut Team Principal
"It's infuriating to see the win escape our grasp, despite being the fastest on track. The engineers did a fantastic job and our car was the quickest in these tricky conditions. Our strategy was perfect and we had put everything in place so that we could make it to the end of the race without needing to pit for fuel again. We were relaxed and the drivers were putting their final touch to this team effort. After winning in the blistering heat of Austin, we proved that we can now produce top level performances regardless of the conditions. We didn't win the race, but we nonetheless made up a few points on the championship leader. The window of opportunity is narrower, but we are going to keep giving our all right to the end of the season."

"During qualifying, we obviously didn't have the best pace and so we reviewed everything fully in preparation for the race. The Signatech Alpine Matmut team again showed its ability to react, because we were clearly the fastest out on track today. The end result is therefore fairly frustrating, but we have kept our hopes of winning the title alive by closing the gap to the leaders. We'll certainly be a force to be reckoned with at the last two rounds!"

"It's the first time I've been on the podium without actually having driven the car! In the pit garage, I experienced the excitement of the changes in strategy and I also shared the frustration of the team, because we had the capacity to win this race. I'm really looking forward now to getting behind the wheel of the Alpine A470 in Shanghai…"

"After a fairly difficult start to the weekend, we vastly improved our set-up for a wet track. We didn't win the race even though the potential was there, but we can't fault our effort at all. The fog certainly didn't do us any favours, but we nonetheless finished second and are still in with a chance of challenging for the title right to the end. Bring it on in China!"