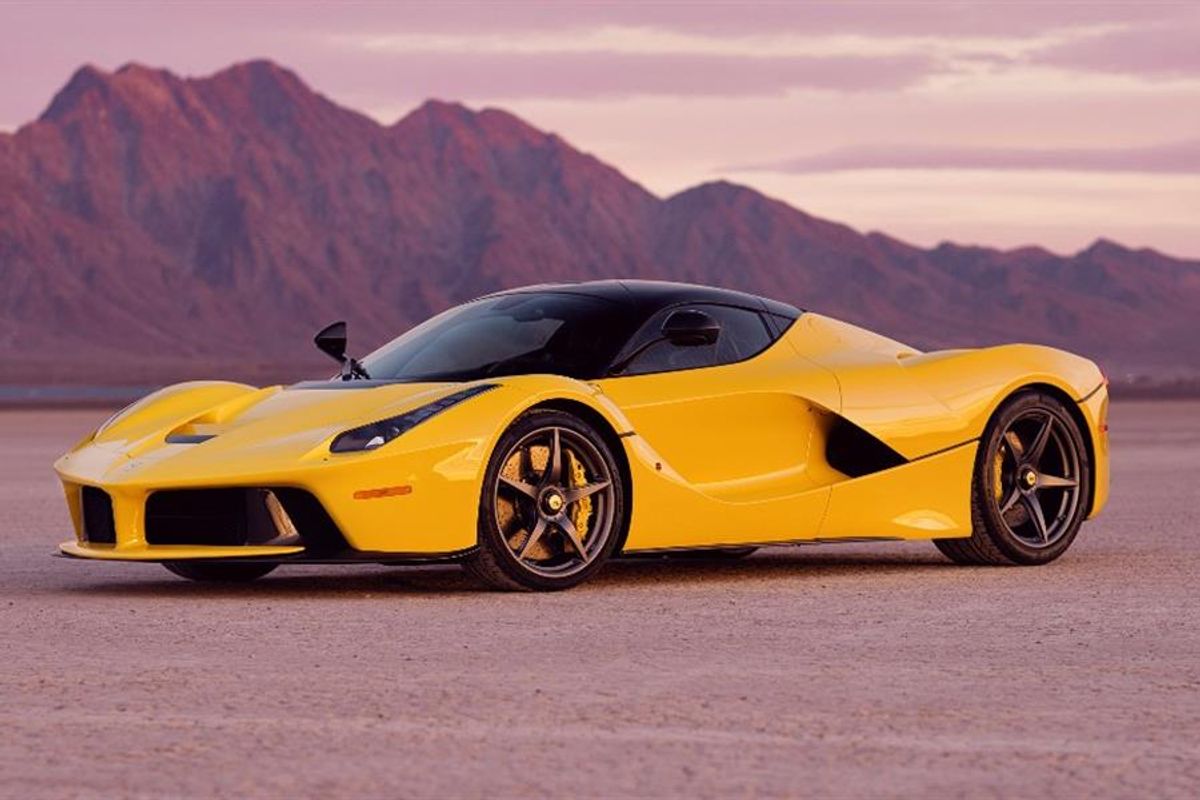 Ferrari Styling Center Chief Flavio Manzoni applied his considerable wind-tunnel experience to finalizing the car’s otherworldly exterior shape and myriad aerodynamic details. The LaFerrari’s body is sculpted to cut through the atmosphere, splitting the air with the F1-style front spoiler and redirecting it through and around the car to generate as much downforce as possible, with significant contributions from a large active rear wing and the articulated elements located within the rear diffuser tunnels.

Designed to provide maximum safety for its occupants, the car’s central structure is a carbon-fiber cocoon composed of four different weaves of carbon-fiber cloth, hand-laminated into molds before baking in the Ferrari Formula 1 facility’s own ovens. This construction technique results in a monocoque that is not only lighter than its McLaren and Porsche competitors, but stronger as well.

To capitalize on the tub’s torsional strength, the driver’s seat is bolted directly to it to minimize the flexing a sliding mount would allow; adjustments are made by moving the pedals and steering wheel to suit the driver. This direct mounting also means the seat is lower than it would be on an adjustable platform, in turn reducing the overall height of the car and lowering the center of gravity.

The LaFerrari’s modern cockpit design shows significant influence from Ferrari’s F1 drivers. The reconfigurable digital-instrument panel and large column-mounted shift paddles are situated behind the rectangular racing-style steering wheel, which puts the start button, Manettino ride and stability selector, and audio-system controls close at hand. Other secondary controls for audio, navigation, climate and telemetry are located on the dash and driver’s door. Occupants are ensconced in snug-fitting contoured seats covered in supple Italian hides and held securely in place by F1-style multi-point harnesses.

Only a naturally aspirated Ferrari DOHC V-12 can emit the shriek emanating from the LaFerrari under full power. Displacing 6.3 liters and controlled by Ferrari/Bosch’s Electronic Engine Management system, at 789 HP at 9,000 RPM and 516 lb-ft of torque at 6,750 RPM, the LaFerrari is among the most powerful non-turbocharged production piston engines in the world. Add in the electric motor’s contribution of 161 HP and 199 lb-ft of torque, and the final tally is an awe-inspiring 949 HP and 663 lb-ft of torque, delivered to the rear wheels only through a 7-speed dual-clutch automatic gearbox.

Unlike other manufacturers, Ferrari’s interest in electric propulsion focuses on its use as a supplement to its internal-combustion powerplants rather than as a potential replacement. Harvesting its power through 4-wheel Brembo carbon-ceramic disc brakes, the LaFerrari’s electric motor is programmed to fill in during those micro-moments when the V-12 is not at peak power, such as during shifting or accelerating out of a turn. The result is an uninterrupted flow of power that launches the LaFerrari with heart-pounding force on the way to its governed top speed of 217 MPH.

Adorned in striking Giallo Modena paint with optional carbon-fiber body trim, this 2015 Ferrari LaFerrari coupe is fitted inside with black leather upholstery and contrasting yellow accents. The closest thing to a starship ever launched from Maranello, this immaculate Ferrari hypercar has been driven a mere 317 miles, and it is offered complete with owner’s manuals, seat and car covers, and a telemetry fob.