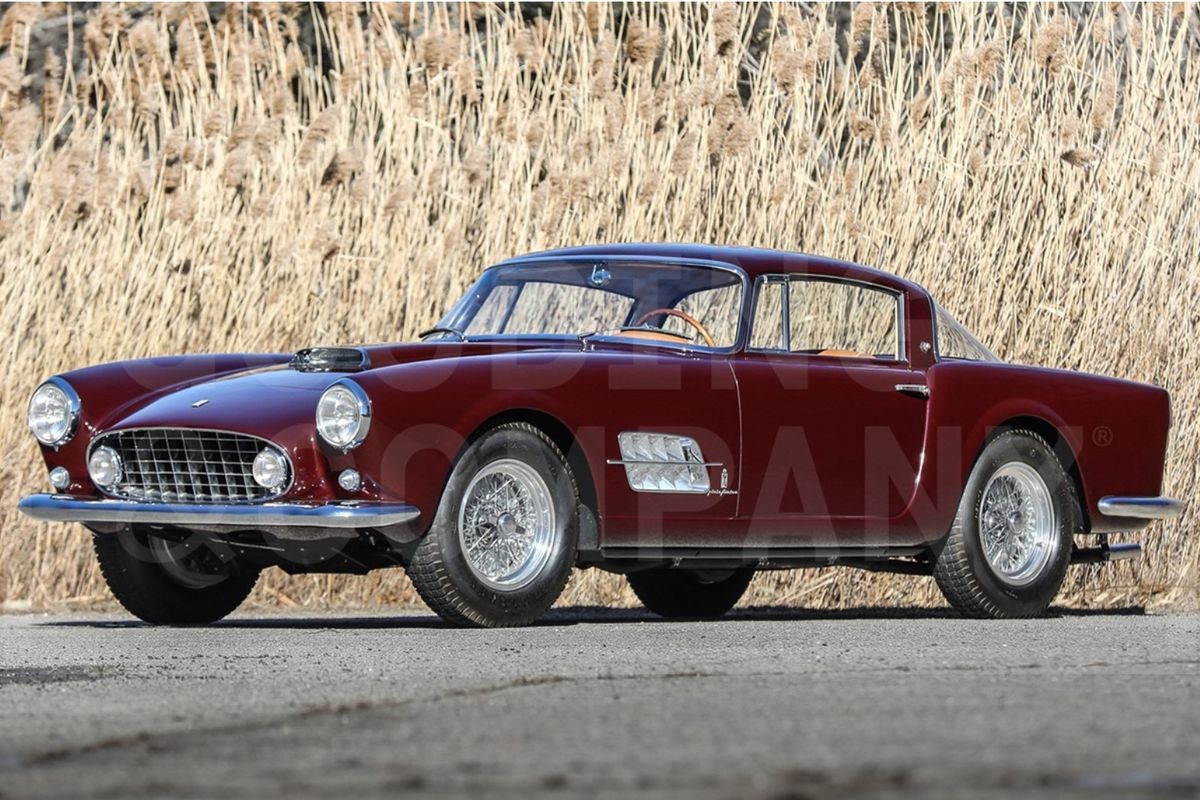 Of all the coachbuilt gran turismos produced by Ferrari throughout the 1950s and 1960s, few were as magnificent as the 410 Superamerica.

Unveiled in 1955 as the successor to the 375 America, the latest thoroughbred from Maranello built upon the qualities that made Ferraris automotive legends: extraordinary power, fashionable styling, and unmatched exclusivity.

Compared with its predecessor, the new top-of-the-line Ferrari was much more refined, benefiting from a strengthened chassis, modern coil-spring front suspension, and more approachable synchromesh gearbox. At the heart of the 410 Superamerica was the ultra-exotic 4.9-liter Lampredi V-12 – a lightly detuned version of the engine that powered Ferrari’s 375 Plus, the legendary sports racer that won both Le Mans and the Carrera Panamericana in 1954. Producing 340 bhp and tremendous low-end torque, the 410 Superamerica was the fastest road car of its day, capable of reaching 150 mph.

Pinin Farina was the predominant coachbuilder of these mighty Ferraris. In total, the Torinese firm constructed 12 similar bodies for the Series I 410 Superamerica on both the original 2,800 mm and later 2,600 mm chassis. The remaining chassis were entrusted to Boano and Ghia, which produced flamboyant designs influenced by American concept cars.

Pinin Farina’s more sophisticated and elegant coupes are distinguished by their impressive scale, decorative flourishes, and bespoke features. As noted by Ferrari historian Antoine Prunet in his book, The Ferrari Legend: The Road Cars, “This 410 SA bodied by Pinin Farina was an altogether aggressive and refined design. A discrete moulding shaped the contour of the rear fender and continued along the lower part of the body, pleasantly alleviating the side elevation, and the generous window area with the wraparound rear window accentuated the refined elegance of this prestigious coupe.”

While in production, the 410 Superamerica had no real rival; it was truly in a class of its own. It was among the world’s most expensive automobiles, and although pricing was always established “in accordance to specifications,” at least one car is known to have retailed for approximately $17,000. The staggering price also ensured that it was available only to an elite clientele; important Ferrari patrons like Renato Bialetti, Emperor Bao-Dai, Fred Lip, Pietro Barilla, and Count Somsky were among the first to place orders for the new car.

In the minds of many aficionados, the 410 Superamerica was the greatest large-displacement Ferrari road car. While the later 400 Superamerica and 500 Superfast occupied a similar role, they lacked the 410’s magnificent Lampredi V-12 – an engine that defined Ferrari’s sound, character, and performance during the 1950s.

The 410 Superamerica presented here, chassis 0491 SA, is the 12th example built. It entered the Pinin Farina custom workshop on May 10, 1956, was assigned job number 15258, and was completed that fall, finished in gray with red leather upholstery.

On October 17, 1956, the Ferrari was sold through Luigi Chinetti Motors to its first owner, H. Richard Dietrich, a successful Philadelphia-based industrialist, philanthropist, and collector. Mr. Dietrich was the president of the Dietrich Corporation, a business conglomerate that included among its many holdings the well-known cough-drop manufacturer Luden’s.

He was a gentleman of exceptional means and tastes, and he elected to take delivery of his new Ferrari while vacationing in Europe. Correspondence between Mr. Dietrich and Luigi Chinetti was sent to his attention at the Hotel Meurice and Hotel Ritz, the most prestigious addresses in Paris.

In December 1956, having enjoyed his new Ferrari throughout the fall vacation season in Europe, Mr. Dietrich hired the Intra Mar Shipping Corporation to transport 0491 SA to New York by boat. Upon the car’s arrival in the US, it was registered in Pennsylvania and saw very little use over the next three decades.

In 1984, following Mr. Dietrich’s death, 0491 SA was sold by his son to famed producer and director Greg Garrison of Los Angeles. Though he is most widely known for producing Dean Martin’s television show, Mr. Garrison was admired in the Ferrari community for his exceptional vision as a collector. During the 1970s and 1980s, he assembled a sensational collection, specializing in important one-off show cars and limited-production coachbuilt models. In this respect, he was a pioneer, as most Ferrari collectors of the period were focused on sports racing cars and more common production models.

Soon after 0491 SA arrived in Greg Garrison’s stable, it was entrusted to his preferred Ferrari specialist, Bruno Borri’s Modena Motors in Los Angeles. Between 1984 and 1986, the Superamerica was carefully restored in a distinctive dark green with a contrasting metallic silver roof. As this work was being carried out, Mr. Garrison used his influence with the factory to secure copies of the car’s build sheets, which confirm 0491 SA retains its original engine (internal no. 13 GA), gearbox (37 PA), and differential (21 GA).

In August 1986, the Ferrari made its debut at the Pebble Beach Concours d’Elegance®, where it was awarded the Hans Tanner Memorial Trophy, a prestigious honor bestowed upon the best Ferrari present.

Following its successful outing at Pebble Beach, the Superamerica was a prized fixture in Mr. Garrison’s collection until 1999, when it was sold to the current owner, another connoisseur of coachbuilt Ferraris.

Although the Ferrari remained in excellent condition at the time of his acquisition, and had traveled less than 12,000 km (approximately 7,450 miles) from new, the consignor commissioned Mark Allin’s renowned Rare Drive Inc. in East Kingston, New Hampshire, to perform a comprehensive, show-quality restoration.

During the painstaking process, no expense was spared to ensure that 0491 SA would be a serious contender on the concours circuit and perform as Ferrari had originally intended. The result of the restoration is remarkable and its quality is particularly evident today, as nearly a decade has passed since the work was completed. The Superamerica, tastefully finished in rich Amaranto with butterscotch leather upholstery, is jewel-like in every detail, from its polished Borrani wire wheels to the meticulously detailed engine bay.

Since its restoration, 0491 SA has been shown selectively. Following its debut at the Pebble Beach Concours d’Elegance® in August 2008, the Superamerica has been exhibited on just one other occasion – at the 2009 Cavallino Classic in Florida. There, the Ferrari was judged by a team of marque experts and awarded both the coveted Platinum Award as well as the Excellence Cup, a special honor recognizing the car’s significance and quality of restoration. Since these outings, 0491 SA has been kept among other coachbuilt Ferraris in its owner’s stable, where it has benefited from minimal use and fastidious care.

In keeping with its impeccable presentation, this award-winning Superamerica is offered with a comprehensive file of supporting documentation. This includes a report produced by Ferrari historian Marcel Massini, copies of the factory build sheets, and period photographs. Also included are copies of the aforementioned correspondence between H. Richard Dietrich and Luigi Chinetti, as well as a letter from Mr. Dietrich’s son to the current owner.

With just 12 examples built, the 410 Superamerica Pinin Farina Series I Coupe is among the most exclusive road-going Ferraris of the 1950s. This was truly a car of kings, powered by Ferrari’s magnificent Lampredi 12-cylinder engine and hand built by the craftsmen who perfected the art of bespoke, custom coachbuilding. These extraordinary automobiles rarely appear for sale, either at auction or privately, as most are fixtures in major collections or heirlooms in long-term family ownership.

A low-mileage, matching-numbers car gloriously restored, this particular Superamerica possesses all the qualities one looks for in a classic Ferrari. The history of 0491 SA is clear and well documented, and its provenance is second to none. It counts H. Richard Dietrich and Greg Garrison as its former owners, and is being offered directly from one of the finest collections of important coachbuilt Ferraris ever assembled.

The preeminent example of an incredibly rare breed, 0491 SA has remained an object of immense desire since Mr. Dietrich first took delivery of it in Paris more than 60 years ago. Its new owner will also have the great pleasure of acquiring a Ferrari of particular distinction.