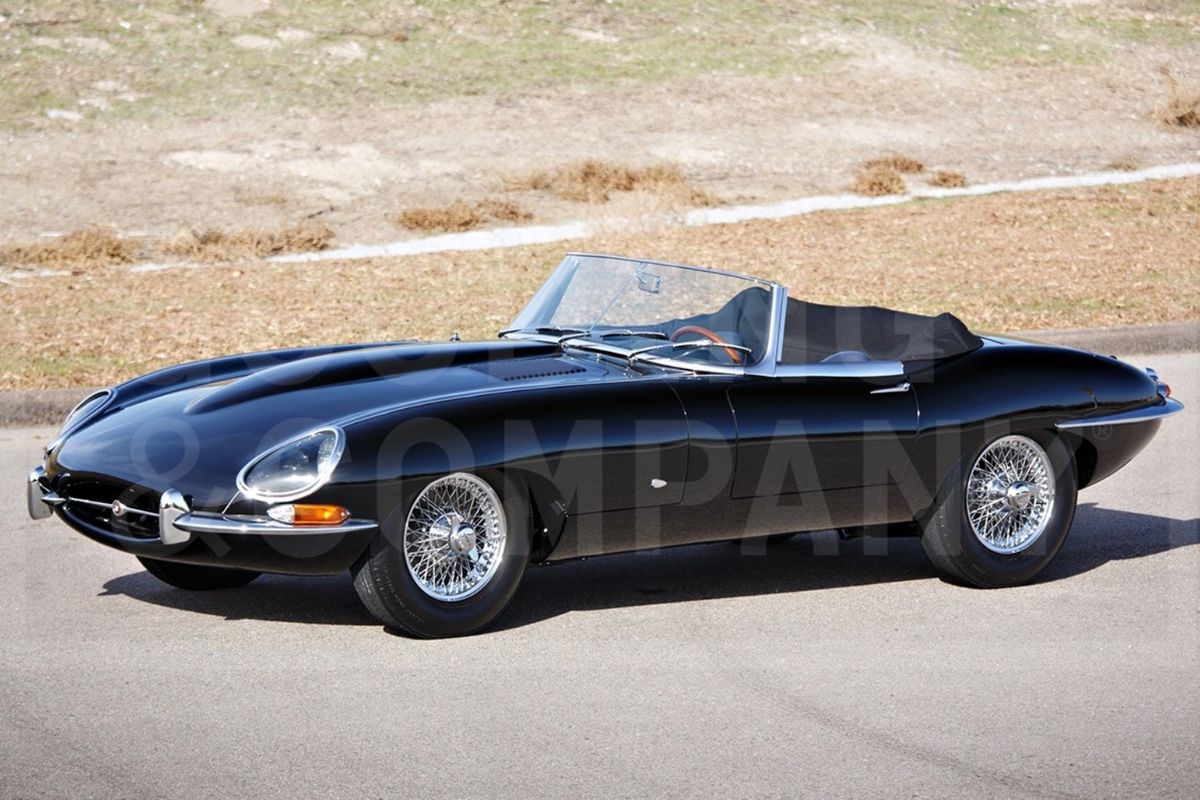 THIS CAR
In recognition of its iconic status and timeless beauty, a Jaguar E-Type was accepted into the collection of the Museum of Modern Art in New York. The grand finale of Sir William Lyons, the E-Type was designed by Malcolm Sayer; its svelte lines with covered headlights, small grille, and minimalist bumpers render this car fast – and fast-looking – even when stationary. More than 50,000 six-cylinder E-Types were built, but the Series I cars are deemed the most desirable by Jaguar aficionados. Of these, the first 300 production cars, featuring the fabled outside bonnet latches, welded hood louvers, and flat floors are, to this day, the holy grail for collectors.

This Roadster was the 231st Series I E-Type to be built. According to its accompanying JDHT Certificate, chassis 875231 was completed on July 15, 1961, and dispatched just six days later, finished in Opalescent Bronze paint with a Beige interior and a Fawn top. The car spent its early years with California owners; in 1993, in the care of its second owner, Karl Schurz, this Series I E-Type underwent considerable work, as documented by abundant receipts, photos, and work schedules, which also accompany the car. In 1996, Jordan Harris acquired the Jaguar, and around 2000 he had it fully restored by noted E-Type expert Richard Darnell, at a cost of well over $100,000. Following this comprehensive, photo-documented restoration, the E-Type debuted at the May 2001 JCNA event, where it placed First in the Grand Champion Class with a perfect 100-point score.

In 2002, this Jaguar E-Type was acquired by Bobby Rahal, an International Motorsports Hall of Fame driver who won three Champ Car season championships and many major titles, including the 1986 Indianapolis 500, the 1987 12 Hours of Sebring, and the 1981 24 Hours of Daytona. When he retired from driving, Rahal won the 2004 Indianapolis 500 as a team owner and remained in management at the Jaguar Formula 1 team for many years. After the E-Type spent a few years in his collection, Mr. Rahal relinquished it to a Utah-based collector, but, unable to resist the panache of this iconic Jaguar, he bought the car back in 2006 and retained it for a decade before selling it to the current owner.

Presenting today in a brilliant triple black color scheme, this early production Series I Jaguar retains its matching-numbers engine per the JDHT and presents in excellent condition with minimal post-restoration miles. This E-Type comes with prodigious documentation, abundant extras (including toolbox, copper mallet, and grease gun), and counts a motor sports legend among its former owners.