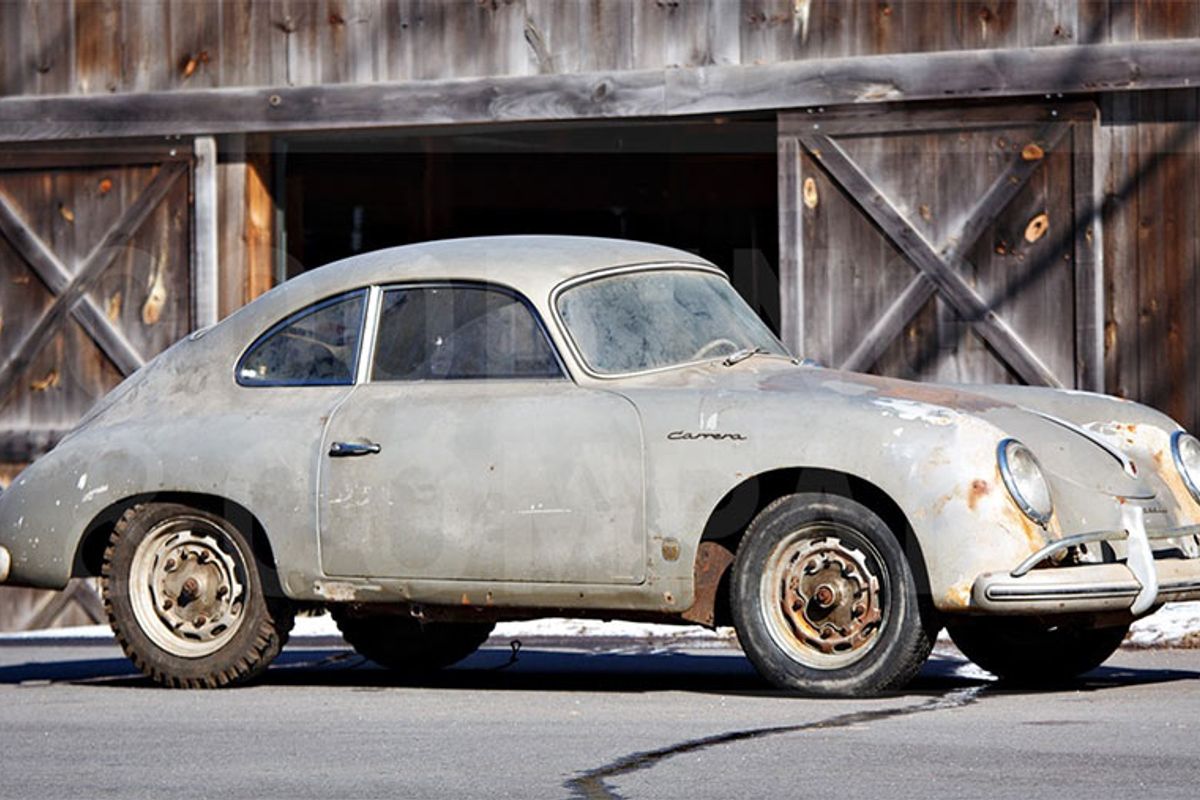 A very rare opportunity – you just wonder how many “barn finds” still exist? Even photographed outside a “barn” this represents a project of a lifetime. The engine rebuild of what is undoubtedly an exquisitely complex flat four jewel will probably make it one of the most expensive engines to build for a modest 100 bhp but…if you have the deep four pockets and the vision to preserve as much of the original car as possible – would make the multitude of 356 rat rods look like poor imitations of the real deal…”

THIS CAR
The introduction of the 1500 GS Carrera at the 1955 Frankfurt Auto Show represented a significant moment for Porsche in its early days as a manufacturer. By placing Ernst Fuhrmann’s exotic four-cam engine in a 356, Porsche bridged the gap between its production models and the 550 Spyder racing cars.

The 1500 GS featured Porsche’s type 547/1 engine, the first four cam to be installed in a road car. An engineering marvel, it featured bevel-driven camshafts, a roller-bearing crankshaft, twin distributors, Solex carburetors, and dry sump lubrication. The air-cooled flat-four developed 100 bhp at 6,200 rpm – an incredible feat for a 1,500 cc engine in 1955.

According to factory records, this 1500 GS Coupe was completed on July 4, 1957, and finished in Silver Metallic with black leatherette upholstery. It was specified for US delivery – with bumper over-riders and sealed-beam headlamps – and delivered to Hoffman Motors in New York.

Little of the car’s earliest history is definitively known. An inscription in the original carburetor manual suggests that its first owner was Lt. Col. Lassiter Thompson, who, in 1957, was appointed commander of the 61st Fighter Interceptor Squadron at Truax Field in Wisconsin. Written beside this name is “Gerald F. Gedde, 2022 W. Chase, Chicago 45, 23 July 60 – 7 Jan 61.” The manual was found inside an SCCA Chicago Region “Piston Patter” envelope, postmarked April 5, 1963, and addressed to Benjamin B. Hursh IV of Wilmington, Illinois.

The first definitively known owner was Manfred Loewen, a German mechanic who began his career with Rolf Goetze, the piston ring manufacturer who famously drove his Carrera Speedster to a record-breaking endurance run at Monza. Loewen then trained at the Porsche factory and, after attaining master mechanic status, was assigned to Brundage Motors in Jacksonville, Florida. Once in the US, he began to race his own Carrera Speedster in SCCA events, modeling it after Goetze’s record car.

By the early 1960s, Loewen was working for Bill Spreen VW-Porsche in Atlanta. There he acquired this Carrera, which had been traded in after its engine failed during a trip from Chicago to Florida. Loewen set about to rebuild the engine – even acquiring a new crankshaft and pistons for it – but instead sold the car to Willard Strain of Dalton, Georgia.

In 1970, Reginald Mullinux was looking for a car to celebrate graduating college. He wanted a new MGB, but his brother knew of an old Porsche for sale, which had its original Carrera engine in pieces and a new 912 engine installed. According to Mr. Mullinux, “The advantages were many; it would be faster, handle better, and not depreciate as would the new MGB.”

He bought the Carrera in 1970, but didn’t drive it until returning from service in the Army. When the Porsche’s ailing brakes failed the 1973 state safety inspection, it was parked in the carport. After a few attempts to revive the car, its 912 engine was removed and the project left abandoned. It has remained in static storage since.

Today, this 1500 GS presents in wonderful, unrestored condition. The tub, doors, hood, and deck lid are all stamped with the last digits of the chassis number, and the original chassis stamping and data tags are clear and undisturbed. The original engine is still disassembled and correctly stamped 90853, with the internal assembly number found on various components. The transaxle is the original unit per factory records, and many major components, including the gas tank and wheels, bear mid-1957 date stamps.

The interior appears original and generally well-preserved, and the odometer showed just 52,837 miles at the time of cataloguing. Charming details include an SCCA pin on the dash, West Georgia College parking permit, 1971-issue Georgia license plates, and a 1972 state inspection sticker.

Offered with the sale are some original tools in a roll, a jack, Porsche Certificate of Authenticity, and copy of the factory Kardex. An extraordinary collection of literature accompanies the sale, including rare Carrera-specific supplements (one for the driver’s manual and another for additional care and upkeep), maintenance instructions for the Solex carburetors, a Deta-Batterie warranty card (stamped July 4, 1957, and inscribed with the chassis number), factory blueprints, and a period magazine ad.

Hidden away for decades and possessing a fantastic history, this unrestored, matching-numbers 1500 GS Carrera is certainly one of the most exciting barn-find discoveries in recent memory. This is truly an opportunity not to be missed for the collector who has longed to own a genuine and noteworthy example of Porsche’s legendary four cam.