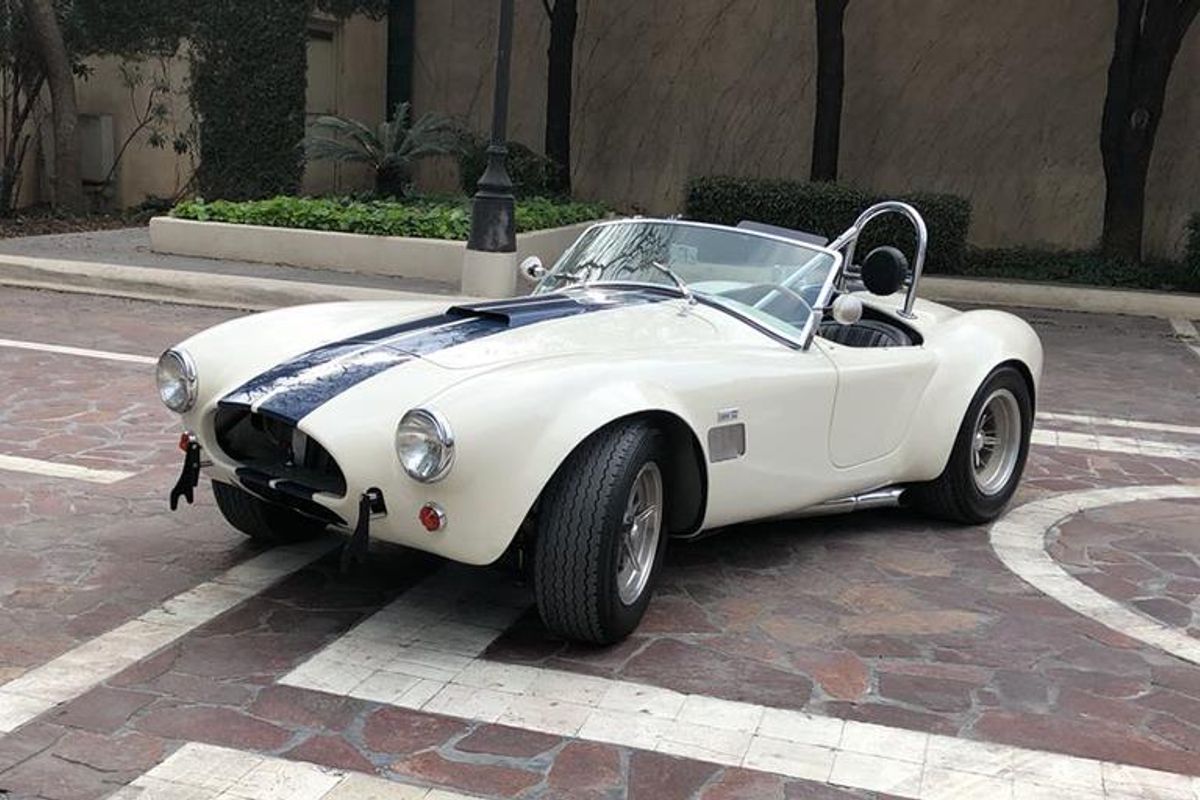 The Model: When Carroll Shelby unleashed the Cobra, it was soon surrounding and devouring all of its competition. While the world of motorsports continued to progress in new directions, eventually these potent snakes on wheels were left behind. However, there was a generation that knew that the Cobra was truly the best sports car ever produced in America, maybe even the world. Within a few years of Shelby America's decision to halt production, a number of Cobra replicas started to show up on the market. In the 1990's, when Cobra fever hit a high, good old Carroll Shelby decided he had enough of "wannabe" Cobras flooding the market, many carrying his name. If the performance car public wanted a new Shelby Cobra, then he would be making them.

The Car: Manufacturer to exact original specifications by Shelby this Authentic CSX 7000 Series was first sold to a collector dealer in San Antonio, Texas, it was then sold to a prominent Mexican collector. Fitted with competition options like roll bar and fire suppression system. Well cared for and excellent running condition.

The Model: The GT40 story is a tale of how the underdog beat the giant. Known and loved by car enthusiasts around the world, it is a story of perseverance and triumph against the odds; a real-life legend. Henry Ford II, as an automotive magnate confined to spectatorship, expressed interest in a partnership with Enzo Ferrari and the pair brokered a deal that culminated in the imminent sale of Ferrari to Ford Motor Company in 1963. However, the deal was ill-fated and Ferrari severed ties at the 11th hours after millions of dollars in legal fees had changed hands. In 1963 Henry Ford established Ford Advanced Vehicles (FAV) specifically for the development of the forthcoming racing car, under the direction of John Wyer. The name “GT40” was coined from the production numbers of the subsequent cars, the GT for “Grand Touring” and the 40 representing the total height of the car in inches – a requirement for international endurance racing at the time. Winning the 1966 24 Hours of Le Mans beating the Ford GT40 legend lives on today and the tale of triumph continues to inspire as it did decades ago.

The Car: This car is a faithful recreation of chassis number 1083—once owned and driven by Wilson Fittipaldi. The coachwork of the RCR GT40 is a precise recreation of the original GT40 Mk1—after all, the tooling was cast from an original car. It's decked-out in period-correct livery with the appropriate vinyl vintage decals, Ford Racing Red and Wimbledon White paint. This reproduction is one of the most published cars of its kind. Built for the track, but street legal. This car comes with an extra set of track wheels (BRM Vintage) and tires (Hoosier).
The engine is built with an aluminum 8.7 deck, Ford SVO 302, which produces 630hp (Dyno Tested). The gearbox is the coveted ZF 5-speed just like in the original. It has been completely & professionally rebuilt and all internals have been safety wired. From the driver's seat, you can adjust the front/rear brake bias on the fly, you can activate the fire suppression system and you can monitor the vital statistics. The 6-point roll cage is unobtrusive and barely visible. Some of the instrument gauges serve two functions—for example, the oil temperature gauge will read the engine oil temp or the transaxle oil temp when you flick the toggle. The speedometer is an extremely accurate 200 mph device! In addition to those gauges, you can also monitor the fuel level for both tanks, the fuel pressure, oil pressure, volts, and water temp all going in and out of the engine.: