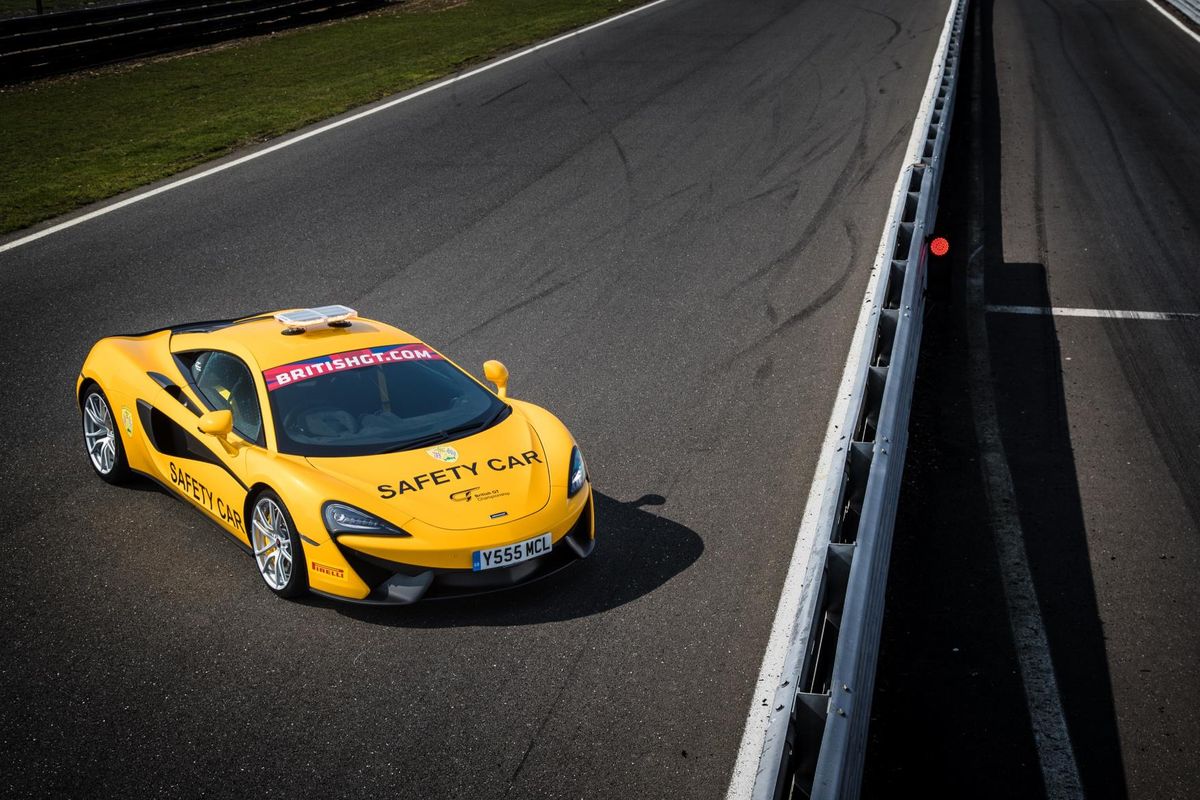 McLaren Sports Series models to manage on-track safety and coordination of one of the strongest fields in the history of the British GT Championship
Seven entries confirmed to date will see McLaren represented in GT3 and GT4 classes, with Factory Drivers competing with three customer teams
McLaren Driver Development Programme to feature in championship with two 570S GT4s run by customer team Tolman Motorsport

McLaren Automotive is to strengthen the commitment to racing in the UK’s premier GT series, the British GT Championship, in 2018 with the confirmation of an extension to the relationship which will see a Sports Series model as the Safety Car at each of the seven race weekends. McLaren will also have a strong presence throughout the grid, with four customer teams entering a total of seven cars across the GT3 and GT4 classes.

2018 marks the third consecutive year McLaren has supplied the Safety Car to the SRO-run series and, as in previous seasons, the continued support will see a range of models from the McLaren Sports Series leading the field and coordinating on-track safety throughout the season. Sharing the carbon fibre MonoCell II chassis seen in the 570S GT4, safety is at the core of every model in the Sports Series. The range comprises the 540C Coupe, 570S Coupe, 570GT and the recently-launched 570S Spider.

Three McLaren Factory Drivers, including two of the recent additions to the line-up, will also be present on the grid, as Ben Barnicoat and Joe Osborne campaign the 570S GT4 with customer teams track-club and Tolman Motorsport respectively. Meanwhile, fellow Factory Driver Rob Bell returns to the cockpit of the 650S GT3, as Balfe Motorsport makes its long-awaited return to the British series.

Tolman Motorsport returns to the championship’s GT4 class for a second season with its 570S GT4. This year the team will race once again with newly named McLaren Factory Driver Joe Osborne reunited with his 2017 teammate David Pattison. The team will also run two further examples of the Sports Series GT4 models, supporting the inaugural McLaren Driver Development Programme which is new for 2018. With official partnerships with Prosource and Richard Mille, and supported by Bell Helmets and Sparco, the two newly entered 570S GT4 will see Charlie Fagg alongside Michael O’Brien, while Jordan Albert shares with Lewis Proctor.

Elsewhere, Factory Driver Ben Barnicoat will make his British GT debut, having been confirmed to race with customer team track-club. The 21-year-old driver, who raced the 650S GT3 throughout the 2017 season, joins Adam Balon as track-club embarks on a second season with the 570S GT4 in the championship. The pair will be looking to make a strong start early on in the 2018 campaign, just as the team did last season by taking victory at the opening round before also winning the series’ blue riband Silverstone 500.

A two-car entry by customer team Balfe Motorsport will represent McLaren across both the GT4 and GT3 categories. The team makes its debut in the series in 2018, featuring a double Pro-Am champion line-up. Defending GT4 Pro-Am champions Graham Johnson and Mike Robinson have joined the team and will once again run the 570S GT4 looking to defend their hard-fought 2017 title. Meanwhile, team owner Shaun Balfe and Rob Bell have moved to the British GT Championship off the back of securing the International GT Open Pro-Am title, and will campaign the 650S GT3 hoping to repeat their successes.

The latest team to confirm entry is GT4 European Series regular Equipe Verschuur. The Dutch team has added British GT to its 2018 season plans, and will make its series debut with Dan McKay alongside Finlay Hutchison. This marks a return to the British GT grid for McKay with a McLaren, having raced a 570S GT4 last season, while Hutchison was one of the rising stars of the GT4 European Series in 2017.

Commenting on the Safety Car partnership, British GT Championship Manager Benjamin Franassovici explained: ‘We are really pleased to confirm the extension to the partnership with McLaren Automotive, which will see a Sports Series model fulfilling our important Safety Car duties for a third season. In addition to choosing the British GT Championship to showcase the latest road car offerings, it is great to see McLaren so well represented on the grid, both in the GT3 and GT4 classes, with some familiar customer teams along with some exciting new faces who look ready for the challenge. This year is shaping up to be one of the most competitive in the history of the series, and it is really exciting to have so many brands involved.’

The 2018 British GT Championship is set to begin at the end of March on the traditional Easter Bank Holiday weekend at Oulton Park, running from 31 March to 2 April. The series then goes on to tour the country, racing at some of the UK’s most iconic tracks, including Brands Hatch, Rockingham Motor Speedway, Snetterton, Donington Park and Silverstone. It will also make its traditional away trip across the channel to race at the legendary Spa-Francorchamps circuit in the picturesque Ardennes Forest in Belgium.