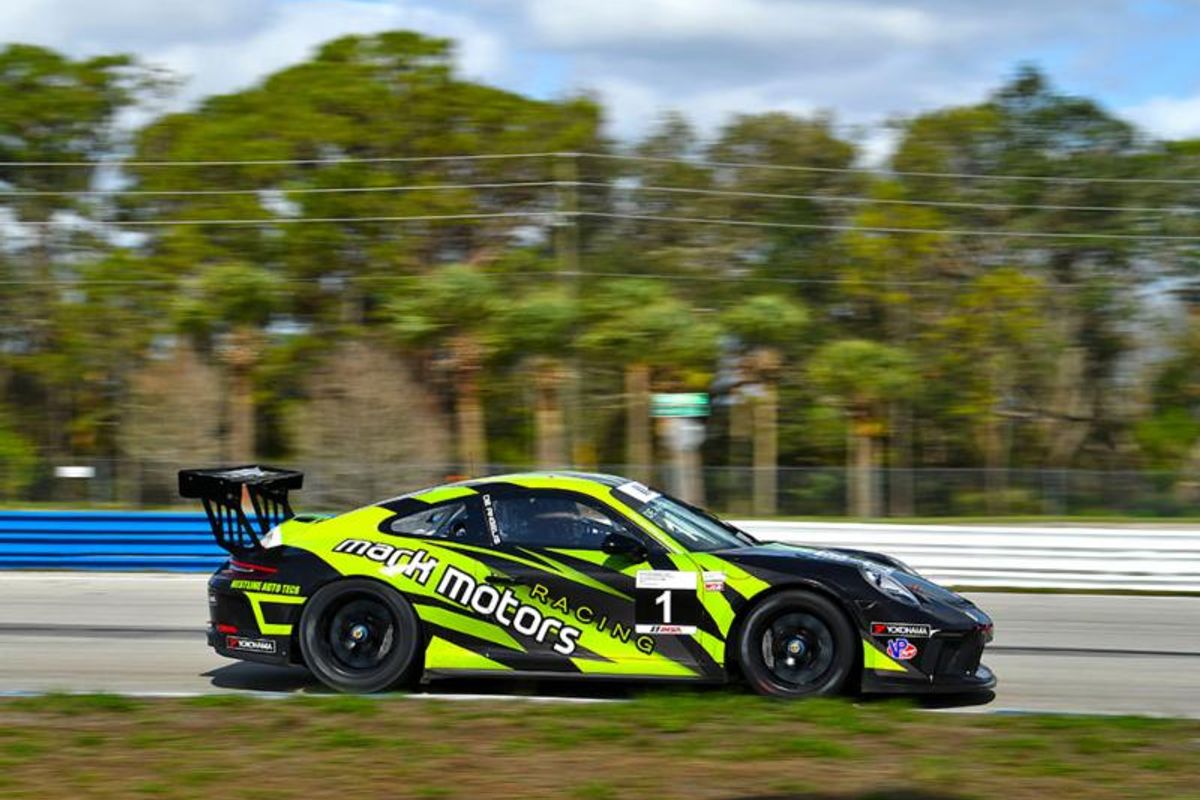 Both series are part of Porsche’s 21 one-make Cup Challenge series worldwide, with every driver competing in 45-minute sprint races aboard Porsche’s iconic 911 GT3 Cup race cars. The first race of the season is slated for Thursday, March 15 at 4:25 p.m. ET with the second on Friday morning at 11:25 a.m. ET. Both races will be streamed live on IMSA.com with IMSA Radio commentary.

And one driver, 17-year-old Roman De Angelis, will be competing in both races at the same time. The Canadian youngster from Belle River, Ontario is entered in both the No. 1 Kelly Moss Road and Race machine in the GT3 Cup USA championship, as well as the No. 78 Mark Motors Racing entry in GT3 Cup Canada.

Mind you, De Angelis isn’t driving two different cars. That would be impossible. He’ll drive one car in both races and will earn points toward both championships.

“I think we have a pretty good shot at winning the American championship,” said De Angelis during a test at Sebring last month. “It’s a really good team, and I think that, with their help, I should be able to become a better driver and at least fight for the championship.

“In Canada, I’m with Mark Motors Racing for my second year, also in the Platinum category. I’m going to be teammates with (2017 Canada Platinum Cup runner-up) Zach Robichon, who’s obviously a very, very talented driver, so it’s going to be pretty competitive up there. I think the same thing, we have a pretty good shot at winning. With Zach’s data and how much he’s going to help me, it’s going to be a tight year, but we’re going to push our hardest and see if we can win.”

He knows it’ll be a “tight year” in both championships, with a stacked field of competitors. Next week’s USA field features a total of 26 entries – 16 of them Platinum Cup machines – in addition to the nine Canadian entries, all of them in Platinum Cup. View the complete USA entry list HERE and the Canada entry list HERE.

Estep finished third in the 2017 Platinum Cup standings in GT3 Cup Challenge USA with a pair of victories. He’s entered in the No. 3 JDX Racing entry.

“It’ll be his second year in Platinum, so he’s got a little bit more time in the car, and he’s definitely going to be somebody that’s going to be hard to beat,” De Angelis said. “(2017 IMSA Hurley Haywood GT3 Cup Scholarship recipient) Max Root is another good driver, and (Anthony) Imperato (who drives the No. 91 Wright Motorsports Platinum Cup machine), all those guys are going to be up there. They have a lot of experience, so they’re going to be – definitely – people who we’re going to have to watch out for. I don’t think it’s going to be easy, but it’s going to be fun.”

De Angelis started his 2018 season with a bit more fun, taking part in the IMSA Prototype Challenge Presented by Mazda season opener at Daytona International Speedway in early January as part of the Roar Before the Rolex 24 weekend.

In fact, he did more than take part. He won the one-hour, 45-minute race, which was De Angelis’ longest continuous driving stint ever in a race car.

“I definitely learned a lot, endurance-wise, like how to manage tires and that kind of stuff,” he said. “Obviously, you can’t just be on the limit 100 percent of the time for that whole hour and 45, because there’s going to be no tires under the car by the end.

“The consistency, definitely, is something I learned. How to manage tires, how to control tires when they overhead, all that kind of stuff is something that, for sure, will help me this year, especially in a shorter sprint race where you’re pushing hard the whole time.

“You can sometimes get a little ahead of yourself and overcook the tires, which is common. I think that definitely put something in my head that I didn’t have last year.”

That IMSA Prototype Challenge Presented by Mazda race at Daytona was a one-off for De Angelis, who has plenty of other racing ahead of him this season in both the U.S. and Canada. But it was a good eye-opener as he continues to build his racing career.

“I think IMSA does a really good job with the development series, not only promoting them, but promoting the drivers and teams as well,” he said. “I think not only doing the Porsche Cup, but also the LM P3 race that I did, I got a lot of exposure from manufacturers there, Ligier, Onroak and all those guys.

“I’m hoping it pays off in the end. From what I know now, I think the development series are really advanced and it’s definitely something that’s a good stairway to the WeatherTech (Championship).”

And that’s where De Angelis ultimately wants to race.

“Yeah, for sure,” he said. “WeatherTech is basically the end of the ladder, so hopefully I get there.”

If he continues to develop and perform as he’s already shown, he may get there sooner rather than later.