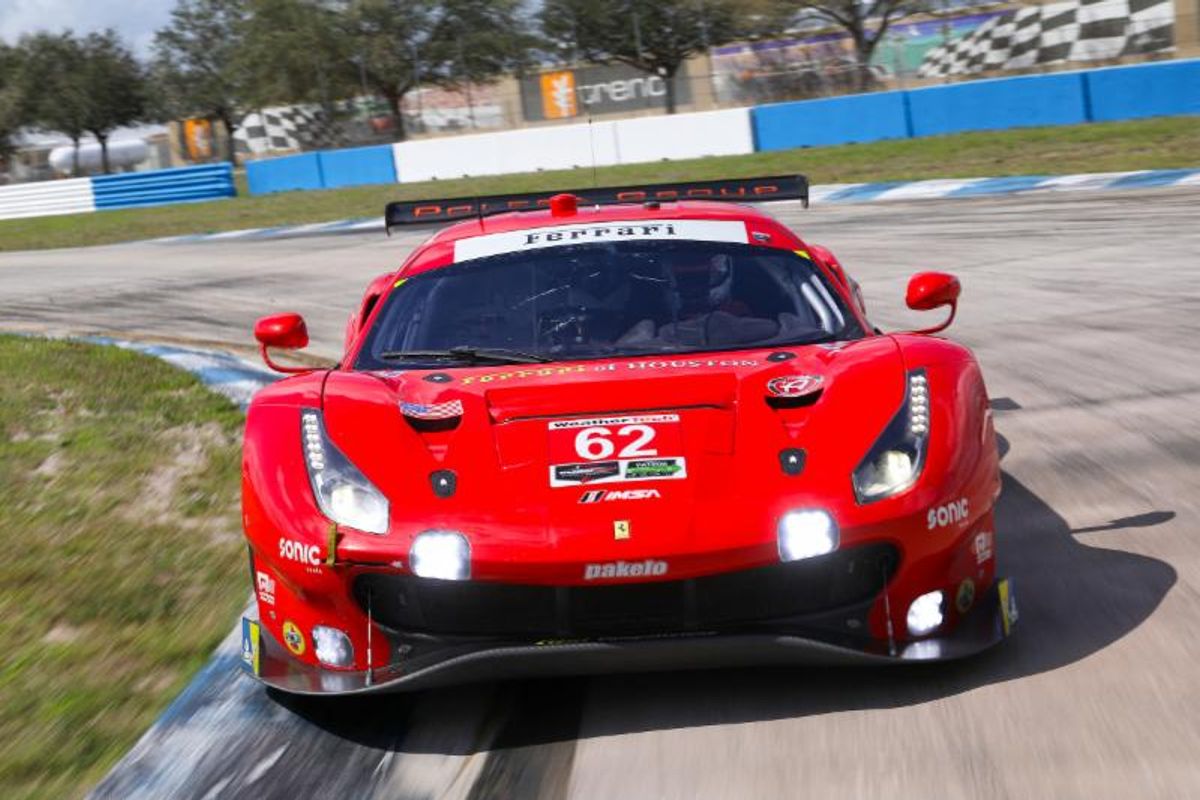 General: The field of 43 cars for this year's 12 Hours of Sebring is down slightly from the 2017 car count of 46. No PC cars this year 'should' reduce the safety cars as it did at Daytona, at least in theory. It's a large number of cars for the bumpy 3.74-mile, 17-turn track. Pit boxes will be small and traffic nearly constant. The high amateur content and car count in the GTD field will again make patience pay in the race. The GTD cars will be very fast on the straights and very difficult to pass cleanly. Even with a Michelin tire advantage, which normally gives the GTLMs a significant braking advantage at most tracks, the GTDs have ABS, which reduces the gap on bumpy tracks.

GTLM Competition: The Ford GTs clearly had a BoP (Balance of Performance) advantage at Daytona to the rest of the GTLMs. Compared to 2017 Sebring, the Corvettes have a considerable power gain, but they didn't flaunt this at the February Sebring test. Fords are up on power with no weight gain. The Porsches are up on power with a small weight gain and had a clear performance advantage late in the Sebring race last year. The Ferrari was given more weight than Porsche and has a small power gain. The BMWs got increased power from Daytona for the February test, and an additional gain for this race. At the test the BMWs clearly had a power advantage, but is it enough? The BMWs are the wild card; no one is sure what they have as it's a new car.

All the manufacturers had cars at the IMSA February Sebring test, but with no 'official' IMSA timing at that test; there's no official documented basis for comparison. All the makes 'showed' they have similar pace, at least in short runs. But with the BoP always looming, you never know what the true competitive pace will be. The differences between driver(s) performance, proper setup work and an inherent performance advantage (BoP) are difficult to separate, particularly at Sebring. Unfortunately for a BoP evaluation IMSA's first three race tracks are anomalies; Daytona, Sebring, and Long Beach.

Based on last years 'true' performance potential and the BoP changes to this year, you'd have to favor the Corvettes followed closely by the Porsche's, Ford's and finally the Ferrari. The BMWs could mix this up once their true pace is shown. The weather could alter this ranking as the tire choices offered don't suit every car the same; some cars run more relatively competitive in the hot and other on a cool track. We might not know the true performance until night falls in the closing stages of the race.

The Track: Sebring is a historic track hosting the longest running endurance race in North America; it's also one of the toughest tracks to get the setup right. You're always chasing the setup (moving target) as the track changes throughout the week with the weather, and tire degradation is significant. The Continental Tire SportsCar Challenge Series race tire rubber doesn't mix well with the Michelin rubber and always causes issues for the GTLMs when sessions follow their races. The Conti race is late Friday; the track will take a few hours to come back to us during race.

The track is super bumpy in sections, which means you want to go in a softer setup direction (anti-roll bars and springs). There are numerous near-threshold braking zones that require good platform support (pitch control) and two sections where change of direction is important, which doesn't suit a soft setup. So, it's a conundrum. You need very good braking here and that's a main area for gains, and the brakes need to be consistent and last all 12 hours. The drivers need confidence in Turns 1 and 17 on the bumps to commit to the throttle early at the exits and a good platform in Turns 3-4 and Turns 15-16 for the change of direction. Good power down out of Turns 5, 7, 10, 13 and 16 aids in a quick lap, as they all lead on to relatively long full throttle sections. You reach over 140 MPH five times a lap at Sebring, so power is extremely important in lap time, as is running as much downforce as you can.

The Setup: Tires are an added variable; the track changes so much as it gets hot, as it rubbers in during the race and then again when it gets cold at the end of the race. You will run a different compound mix at the race start, the heat of the day and at night. Sebring is a compromise; the car needs to be at its best in the closing hours of the race, which are dark with decreasing track temperatures. Daytime pace needs to be controlled with tires, minor setup changes (if possible) and smart driving. You need dampers that support the car but are compliant, with enough high-speed damping to settle and control the car through the bumps. Too much damping upsets the car on the bumps but not enough and you lose platform support/control. Ride heights are always higher than the legal minimum to keep the car from bottoming mainly in Turn 17 (left side) and the exit of Turn 1 (right side). The typical GTLM Ferrari setup direction is moderate springs with anti-roll bars on the soft side. GT cars, in general, struggle with rear stability under braking at turn-in, and this is historically the worst track for this tendency. A soft setup tends to aggravate this tendency. The Ferrari 488 is no exception. Issues with locking brakes in the numerous brake zones are too common here; improving this is difficult with such a bumpy surface. Good power down (and good BoP power) is important with the many long straights; most are not actually 'straight' but are long full throttle sections. If you get the rear stable,
the tendency for off-brake mid-corner understeer becomes the next problem, which delays the ability to go to power.

The Race: The last decade has seen the end to the classic endurance race strategy where you'd save the car to make it to the end, even at Sebring. The cars are all so reliable now that long races are just long full-on
sprint races. The reduced safety cars at Daytona will likely carry over to Sebring. You need good pace all race in all conditions as there's no guarantee of the past years numerous safety cars to bunch the field back up. You have to make it to the finish and be up front to be in contention for a win. You have to race careful and clean, as penalties for avoidable contact are steep; you'll go down a lap easy in the penalty box. The current GTDs (GT3 based cars) have ABS (allowed by the rules) and have so much power (rules again) they will be very difficult to pass here. The GTLM drivers will have to take some risk to get by a lot of the GTDs.

Personally, this is my favorite track and it's been a good track for Risi Competizione with numerous podiums and three GT class wins. Let's just hope our luck in the recent long races changes and we're there at the end to fight for a win!

The entire race will be streamed live on FSGO with FS1 authentication. Fans can also listen in with audio commentary via IMSA.com, RadioLeMans.com and Sirius XM Radio and follow the race live with in-car cameras, IMSA Radio and timing & scoring available worldwide on IMSA.com and the IMSA App.