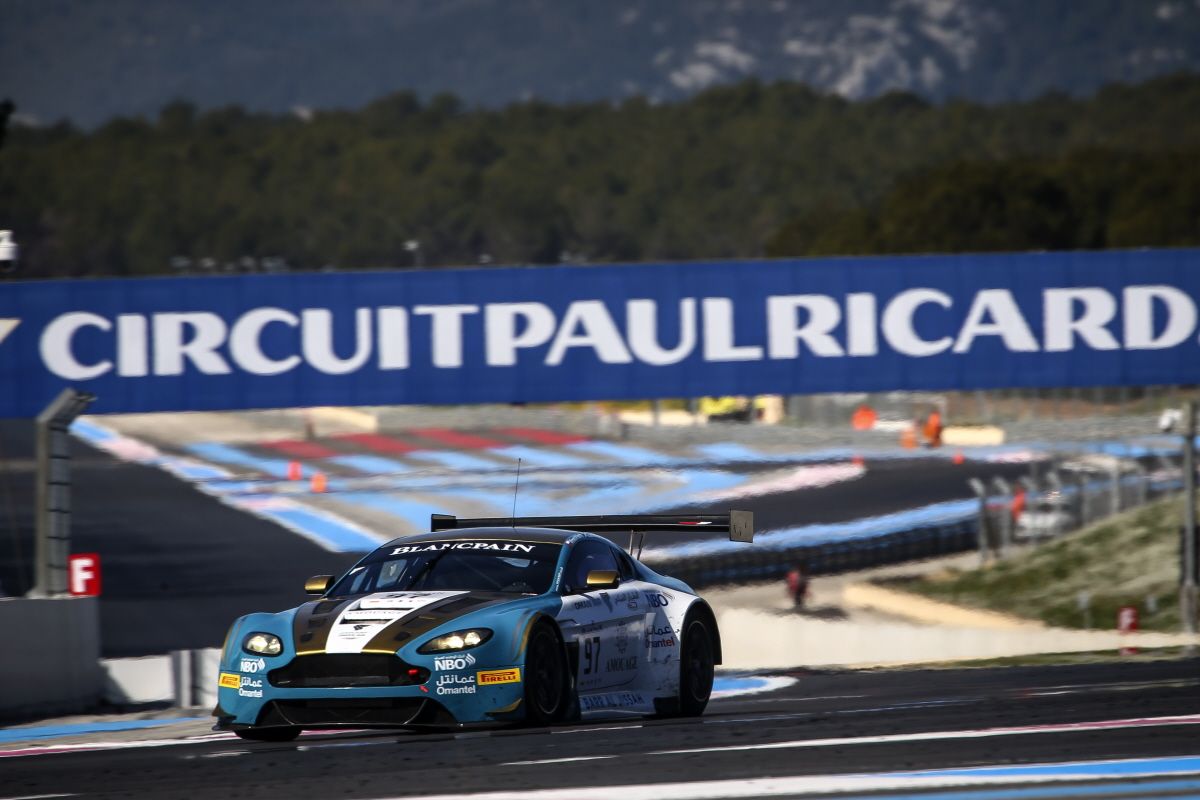 Blancpain Endurance Cup racer Ahmad Al Harthy made a strong and positive start to the first officially timed test of the 2018 season at Paul Ricard in France during his first appearance of the year with new Oman Racing team-mates Euan McKay and Charlie Eastwood.

Graduating into the Silver Class for the new campaign, having won the Pro-Am Class last season with ‘works’ Aston Martin driver Jonny Adam, Al Harthy says preparation for the year ahead is well on course after the first of two days at the Le Castellet track.

During a pair of four-hour track sessions, Al Harthy, McKay and Eastwood each took turns behind the wheel of the No.97 Aston Martin V12 Vantage GT3 as the team worked on set-up and key fine tuning ahead of the opening round of the championship at Monza in Italy next month.

Ending the opening run at a bright but cold Paul Ricard yesterday with a best time of 1m54.515 seconds, less than a second shy of the outright top four at that point, in session two the Oman Racing car delivered an improved lap time of 1m54.263 seconds.

With all focus placed on car set-up, rather than out and out lap times, Oman Ministry of Sports Affairs, Oman Air, National Bank of Oman, Omantel, Barr Al Jissah and Amouage-backed driver Al Harthy is very happy indeed with the first official run of 2018.

“It’s been a typical pre-season test up to now”, he said, “We’re working on the car, trying different things and obviously working as a team for the first time with our new line-up. It’s very important to make sure Euan, Charlie and I, are all comfortable in the Aston although, obviously, the car is no stranger to Oman Racing as it’s the one we won the championship with last year.

“It’s been a long time since we were last on track with our Aston Martin, so it’s just a matter of using these two days to get back into it and make some small changes here and there. The lap times at this stage aren’t something we’re looking at to be honest, the aim is to leave Paul Ricard in a positive way with plenty of work completed and data which will be helpful for the rest of the season.”

McKay and Eastwood are stepping into GT endurance racing full-time this year, both bringing strong experience from the Porsche Carrera Cup GB Championship. The former, of course, did team with Al Harthy during last year’s Gulf 12 Hours where Oman Racing secured second in the GT Pro-Am class.

“Everybody is working really well together, we’re all where we need to be”, added Al Harthy, “The test is important to help establish a strong starting point and it’s also been important to get some running at Ricard on the new track surface. It’s been resurfaced and widened in places for the return of Formula One there, so before Blancpain races at Ricard in June this time is very useful for us.”