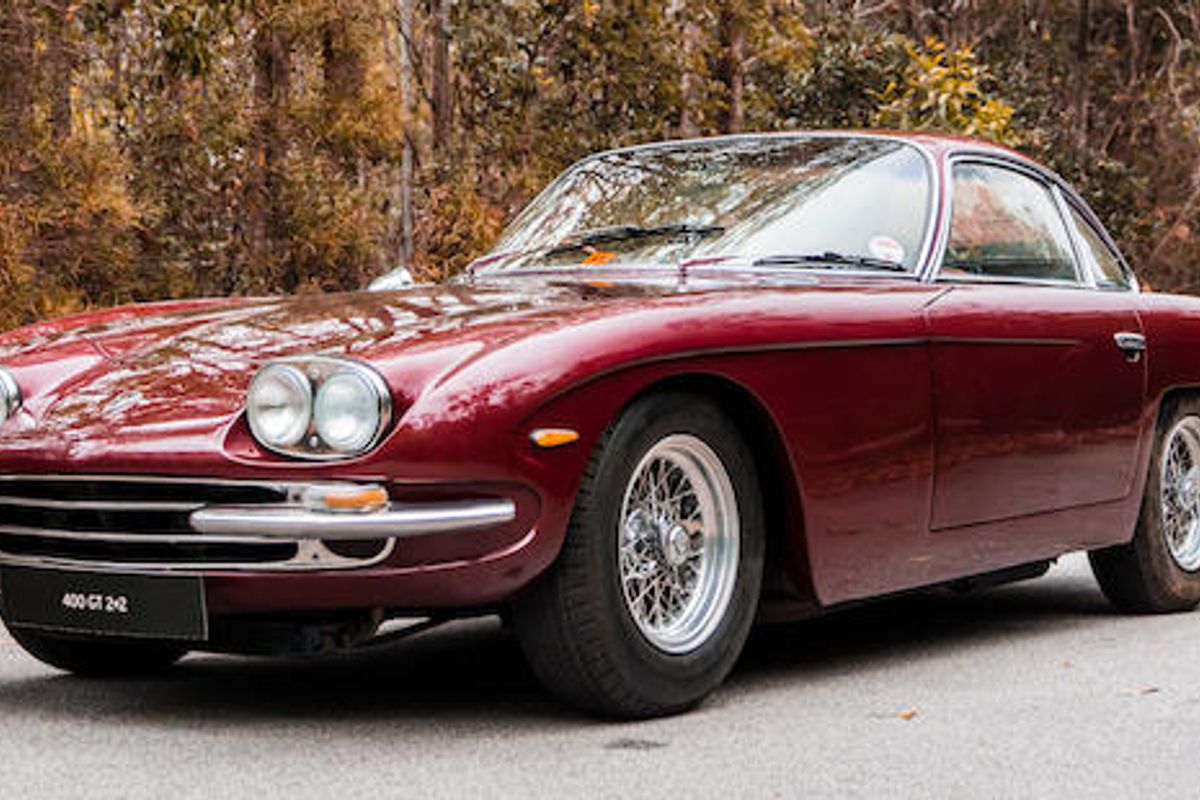 It is the stuff of legend that Ferrari-owning industrialist Ferruccio Lamborghini only turned to automobile manufacture as a result of receiving off-hand treatment at Maranello, vowing to build a better car. A successful manufacturer of tractors and related machinery, Lamborghini possessed the resources to realise his dream without having to compromise.

Lamborghini's first production car, the Touring-styled 350GT, debuted at the 1963 Turin Motor Show with deliveries commencing in the spring of 1964. The work of two of Italy's most illustrious automobile designers, the 350GT featured a glorious 3.5-litre, four-cam V12 designed by Giotto Bizzarrini, housed in a chassis penned by engineer Gianpaolo Dallara, formerly with Ferrari and Maserati. This state-of-the-art power unit produced 270bhp (DIN), which was good enough for a top speed in excess of 150mph.

The 350GT's four camshafts and all-independent suspension meant that it upstaged the best that Ferrari offered at the time, but to compete with his Maranello rival's larger models Lamborghini needed a four-seater, and the 400GT 2+2 duly appeared in 1966. A development of the 350GT, the newcomer used an enlarged - to 3,929cc - V12. This 4.0-litre unit had first appeared in 1965, finding its way into a handful of late 350GTs, this interim model being known as the 400GT. The latter's claimed maximum power was 320bhp – some 50 horsepower more than its predecessor. The 400GT 2+2 retained the overall, and highly acclaimed, looks of the 350GT while contriving to be slightly taller in the interests of increased rear-passenger headroom. Bodies were now steel (the 350GT's had been aluminium) and the 400GT 2+2 had the twin headlights that had already been adopted in place of the oval originals, largely to meet the USA's requirements.

Despite its novice status as an automobile manufacturer, Lamborghini soon dispelled any lingering doubts about its ability to compete with the world's best Grand Tourers. Reviewing the 400GT in its 2+2 form in 1967, Autocar magazine voted it 'better than all the equivalent exotic and home-bred machinery in this glamorous corner of the fast-car market.' The relaxed manner of its long-legged performance was reckoned the finest quality of the Lamborghini, its V12 engine being judged to have the broadest range of smooth torque the testers had experienced. Autocar concluded: 'To achieve this level of performance without noise, fuss, temperament or drama is an achievement; in the time taken for development, it is nothing short of sensational.'
One of only 247 units supplied to a select band of customers between 1966 and 1968, this 400GT 2+2 was first owned by Sir Paul McCartney, MBE. This car is believed to be one of four imported into the UK by concessionaires Mitchell & Britten. The Lamborghini was featured in The Autocar magazine (2nd February 1967 edition), having been air freighted into the UK by British United Air Ferries. These cars were converted by Hooper & Co from left-hand to right-hand drive specification for Mitchell & Britten's UK customers.

'SLF 406F' was first registered on 16th February 1968 at a time when Paul McCartney and The Beatles were at the peak of their popularity, although restricting their work to the recording studio. Paul McCartney's ownership of this car is referred to in 'Lamborghini Supreme Amongst Exotics' by Andrew Moreland; 'Lamborghini' by Chris Harvey; and 'Lamborghini The Legend' by David Hodges. The car also appeared in 'Anthology of The Beatles' – a 1996 BBC TV series.

The immediately preceding owner - a well known motoring connoisseur and collector - bought this car in 1979 and, apart from an early change of colour to its present wine red livery, it has remained in exceptionally original condition. During this previous ownership it was always taxed, MoT'd, and properly maintained. The gearbox was completely rebuilt in 1988 and the rear suspension in 1994. Four new Borrani wheels were fitted in the 1980s. The aforementioned owner sold the Lamborghini in 1989 but was so fond of it and appreciated its outstanding originality and condition so much that he reacquired it in 1996. During those seven years it had covered a mere 800 miles. Passing into the present ownership in 2011, the car has been stored in a climate-controlled environment within the Lamborghini dealership in Hong Kong since.

Finished in wine red livery with beige pigskin upholstery, this finely styled Italian classic is described by the private vendor as in exceptional condition throughout. Accompanying documentation consists of sundry bills, period sales brochures, copy parts catalogue, an old-style logbook, and a copy of the old UK V5 registration document (it should be noted the old UK registration number 'SLF 406F' will need to be re-applied for if the buyer wishes to re-register the car in the UK).

Should the car remain in the UK local import taxes of 5% will be added to the hammer price.