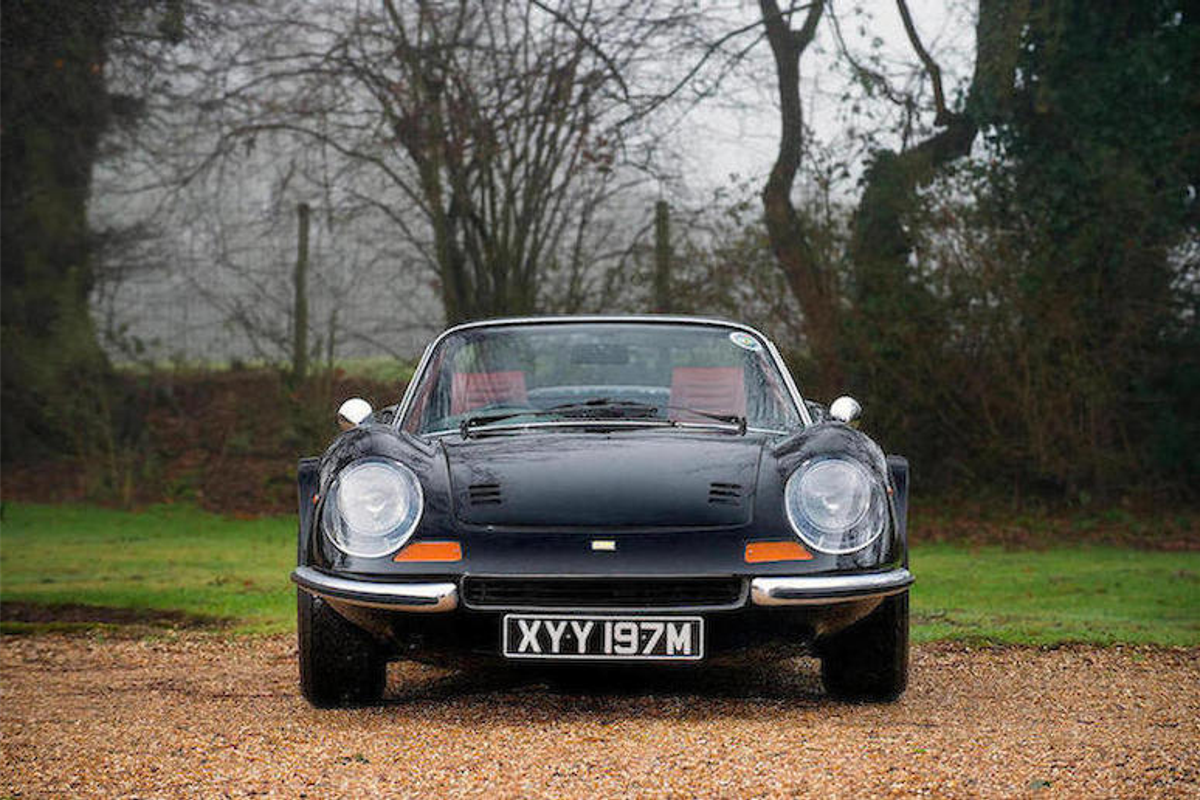 Coachwork by Pininfarina/Scaglietti
Registration no. XYY 197M
Chassis no. 06926

It was the need for a production-based engine for the new Formula 2 that led to the introduction of a 'junior' Ferrari, the Dino 206 GT, at the Turin Motor Show in 1967. Building on experienced gained with its successful limited edition Dino 206S sports-racer of 1966, Ferrari retained the racer's mid-engined layout for the road car but installed the power unit transversely rather than longitudinally. A compact, aluminium-bodied coupe of striking appearance, the Pininfarina-styled Dino - named after Enzo Ferrari's late son Alfredino Ferrari and intended as the first of a separate but related marque - was powered by a 2.0-litre, four-cam V6 driving through an in-unit five-speed transaxle. The motor's 180bhp was good enough to propel the lightweight, aerodynamically-efficient Dino to 142mph, and while there were few complaints about the car's performance, the high cost enforced by its aluminium construction hindered sales.

A 2.4-litre version on a longer wheelbase - the 246 GT - replaced the Dino 206 in late 1969. The body was now steel and the cylinder block cast-iron rather than aluminium, but the bigger engine's increased power - 195bhp at 7,600rpm - was adequate compensation for the weight gain. A Targa-top version, the 246GTS, followed in 1972. While not quite as fast in a straight line as its larger V12-engined stablemates, the nimble Dino was capable of showing almost anything a clean pair of heels over twisty going.

Testing the ultimate V6-engined Dino – the 246 GT – in 1972, the authoritative American motoring magazine Road & Track enthused, 'it is a thrill to drive a car like the Dino, one whose capabilities are far beyond what even an expert driver can use in most real-world motoring, and that is the Dino's reason for being. The real joy of a good mid-engined car is in its handling and braking and the Dino shone as we expected it to. The steering is quick without being super quick, and it transmits by what seems a carefully planned amount of feedback exactly what is going on at the tyres. Thanks to the layout's low polar moment of inertia the car responds instantly to it. The Dino's cornering limits are very high... ' Truly a driver's car par excellence.

As the first series-produced, mid-engined Ferraris, the early Dino V6s are landmark cars. The line they founded would prove to be an immense commercial success for Maranello, production amounting to 2,487 GT Coupés and 1,274 GT Spiders by the time the model was deleted in 1974.

This stunning 246 GT Spider was imported via Maranello Concessionaires in August 1973 and retailed via Guy Salmon Ltd (a Ferrari main dealer), its first private owner being none other than Pink Floyd drummer and renowned motoring enthusiast, Nick Mason. Chassis number '06926' is one of circa 21 right-hand drive models ordered with flared wheelarches and 7.5" wide Campagnolo wheels. The Dino was originally finished in Marrone Metallizato (106-M-73 Salchi) with beige (430) interior, and left the factory equipped with the optional electric windows. The car was repainted in Nero and re-trimmed with brown hide/Daytona seat inserts during the 1980s. Copies of Maranello Concessionaires Ltd's original order and Ferrari's invoice are on file together with a copy of Maranello's supplying invoice dated 17th September 1973 to Guy Salmon Ltd.

Following Nick Mason's ownership, the Dino enjoyed a further five custodians before its acquisition by the current vendor in 2013. For 20 years (1983-2003), '06926' belonged to Mr Vincent Squillaci, who worked throughout this period for Ferrari's Formula 1 development programme under the directorship of John Barnard at GTO (Guilford Technical Office) and from 1992 at FDD (Ferrari Design and Development) in Salford (sales invoice on file). For the last five years, the Dino has been maintained and extensively refurbished for the present owner by marque specialists Hoyle-Fox, with Classiche certification issued in 2013. Hoyle-Fox's bills on file total some £27,000.

The most substantial history file also contains service bills from other recognised specialists dating back to 1982; numerous parts bills from Ferrari UK (Maranello); the current V5C Registration Certificate; and 22 expired MoT certificates dating back to 1983, verifying the recorded mileage of only 52,871. Currently MoT'd, the car also comes with jack and tool roll (with incomplete tool set); Dino leather wallet; and an original owner's handbook, spare parts catalogue, and bodywork spare parts catalogue. Well documented and benefiting from recent extensive refurbishment, this beautiful Dino wants for nothing and has to be one of the very best currently available.