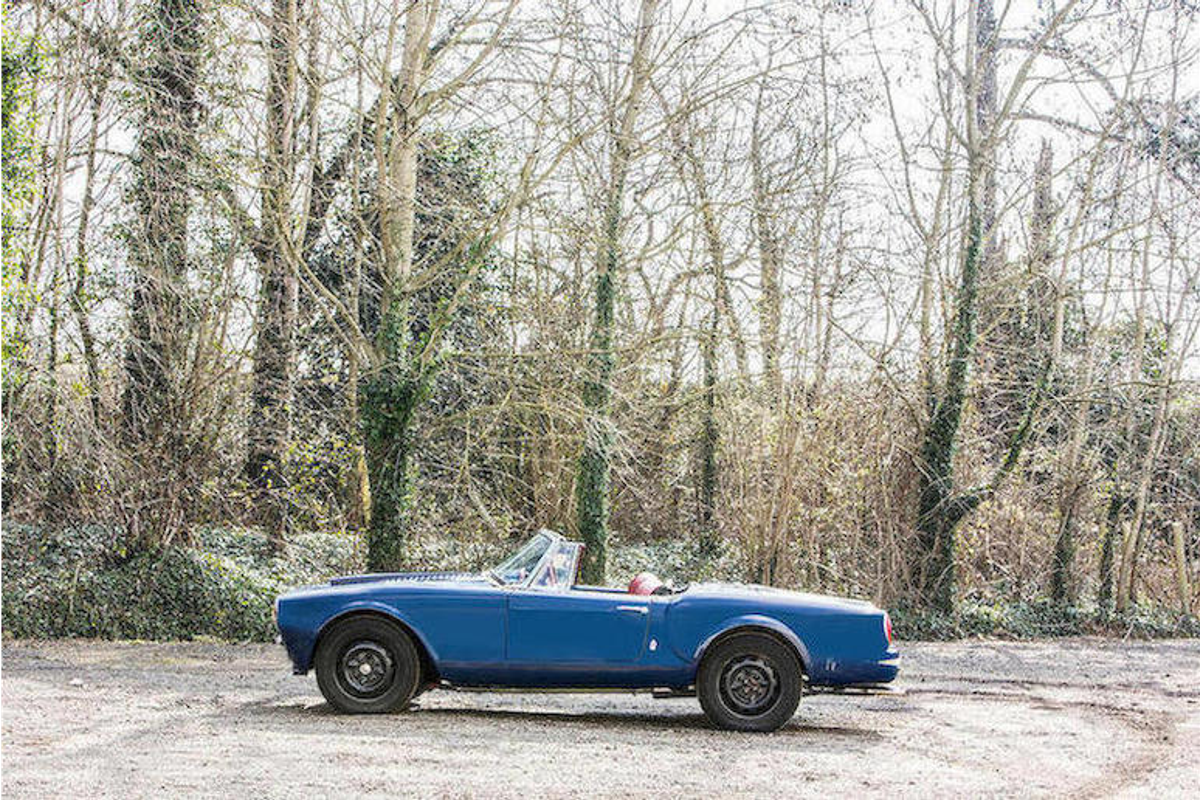 Registration no. not registered
Chassis no. B24 1231

Race developed V6 engine, superlative handling and sensational Pinin Farina styling: these are the ingredients of a sportscar classic and the Lancia Aurelia B24 has them all.

The B24 represents the ultimate development of one of the most influential designs to emerge from Italy post-WW2 - the classic Aurelia. First car ever to employ a V6 engine, the Aurelia was launched at the 1950 Turin Motor Show. Designed in wartime by Francesco de Virgilio, the 1,754cc 60-degree V6 was of all-aluminium construction and used overhead valves operated via short pushrods instead of Lancia's traditional overhead-camshafts. An advanced unitary-construction design, the Aurelia retained Lancia's 'sliding pillar' independent front suspension, first seen on the Lambda, but used a novel semi-trailing-arm layout at the rear, another world first. The transmission too, was unusual, comprising a two-piece prop-shaft and combined gearbox/rear transaxle on which were mounted the inboard brakes, though for once this was not an entirely new departure.

The B10 saloon was joined the following year by the landmark, Pinin Farina-styled B20 Coupé, a fastback '2+2' on a shortened wheelbase which, with its combination of sportscar performance and saloon car practicality, can be said to have introduced the Gran Turismo concept to the world. The Aurelia engine had been increased to 1,991cc in 1951 and it was this unit in up-rated form that went into the B20. Lighter and higher geared than the saloon, the B20 coupé was good for a top speed of over 100mph. Introduced in 1953, the 3rd and subsequent series B20s were powered by a 2,451cc, 118bhp version of the pushrod V6, and this unit was adopted for the B24 Spider launched in 1955, by which time the Aurelia had gained a leaf-sprung De Dion back axle.

Acknowledged as one of Pinin Farina's masterpieces, the Aurelia B24 Spider combined sporting characteristics with an elegance that presaged another of the Torinese carrozzeria's great works: the Alfa Romeo Giulietta Spider of 1955. For the B24 Spider, the Aurelia B20 chassis was further shortened and came with a floor-mounted gearchange as standard. Its performance equalled that of the B20 Coupé, top speed being in the region of 115mph (185km/h). Unusually clean lines enabled the Spider to achieve what was an exceptional performance for an open car of the period, being unencumbered by external door handles (there were internal pull-cords) and benefiting from a gracefully curved wraparound windscreen.

Capitalising on the Spider's success, Lancia introduced a more practical B24 Convertible in 1956, soon after Spider production had ceased. Again the work of Pinin Farina, the B24 Convertible looked superficially very similar but in fact was a total redesign that shared no panels with its predecessor. Easily recognisable differences were many: deeper doors with external handles and wind-up windows, flatter windscreen with quarter-lights, and one-piece bumpers to name but three. There was also, of course, a proper convertible hood providing decent weather protection. The B24 Convertible was built on the same short-wheelbase chassis as the Spider and used a slightly less powerful version of the 2,451cc V6 engine producing 110bhp. Top speed was also marginally reduced, to 107mph. More civilised than the uncompromising Spider, the Convertible was also more successful, 521 being sold between 1956 and 1958, as opposed to 240 Spiders.

This particular B24 Convertible was acquired by Brin Edwards in 1994. An in-house restoration was commenced in the 2000s, the engine and chassis being rebuilt, the interior re-trimmed, and the electrics rewired. The windscreen installation still requires completion, and the chromed hubcap badges are with the car. It is expected that a Thornley Kelham condition report will be with car by time of sale.

Presented in generally very good condition, '1231' represents a wonderful opportunity to acquire an example of the most desirable Aurelia B24 Convertible, epitomising the very best of 'old school' Lancia design.
SALEROOM NOTICES
We are pleased to confirm this is an original left hand drive B24S model, not a B24 as catalogued.