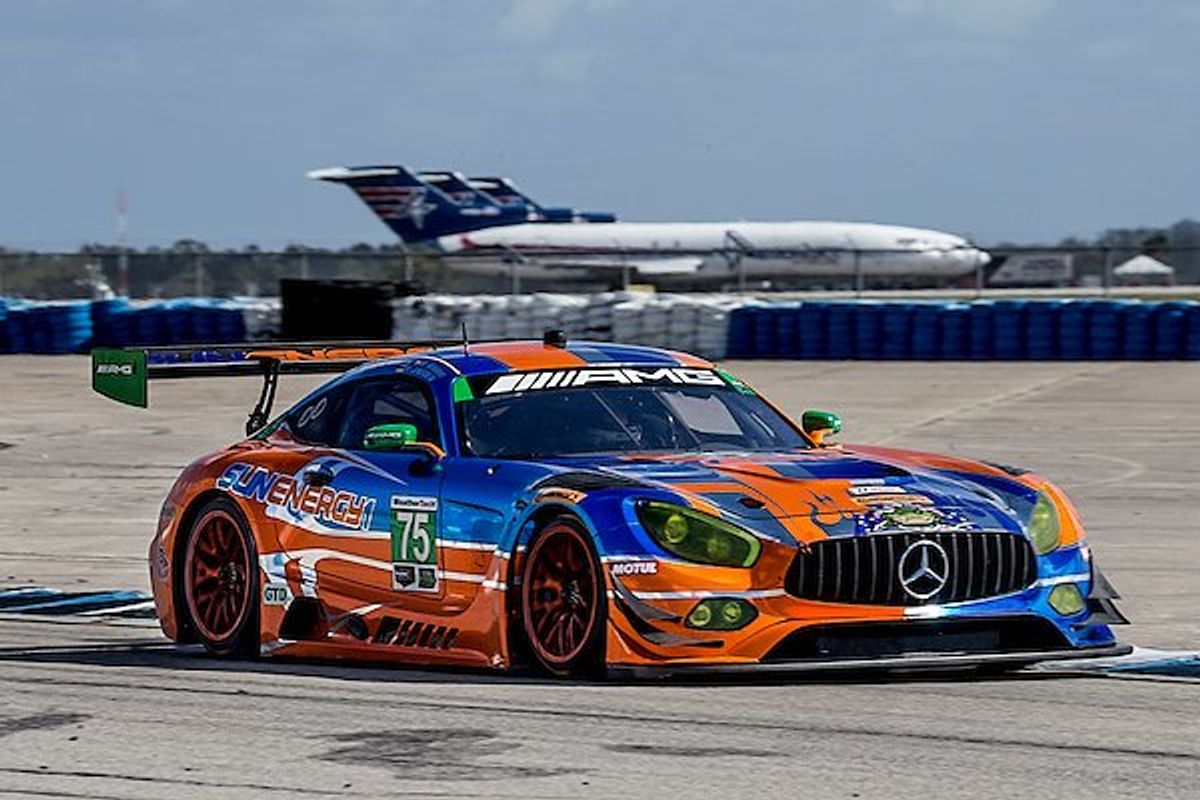 In the 2017 12 Hours of Sebring – just the second race in for the Mercedes-AMG GT3 in IMSA competition – Keating and Bleekemolen joined then-teammate Mario Farnbacher in scoring the first victory for Mercedes-AMG in the IMSA WeatherTech SportsCar Championship at the wheel of the No. 33 Mercedes-AMG Team Riley Motorsports Mercedes-AMG GT3.

Luca Stolz will join full-season drivers Keating and Bleekemolen for the endurance rounds of the IMSA WeatherTech SportsCar Championship in 2018 and will make his Sebring debut in the No. 33 car this weekend. The trio comes to Sebring after finishing fourth in the No. 33 in January’s season-opening Rolex 24 At Daytona.

In the NAEC rankings, the No. 33 and its drivers scored 13 points and currently sit third in the standings. This weekend’s 12 Hours of Sebring is Round 2 of the four-race 2018 NAEC.

The Riley Motorsports team has been expanded this year to include the No. 75 SunEnergy1 Racing Mercedes-AMG GT3 team and lead driver Kenny Habul. Mikael Grenier and Mercedes-AMG factory driver Thomas Jaeger, who were among Habul’s co-drivers in an eighth-place finish at the Daytona opener, both return to the No. 75 team this weekend at Sebring.

In last year’s 12 Hour race, Habul and his co-drivers piloted the No. 75 to a third-place finish in the team’s Sebring debut, sharing the podium with the winning No. 33 team. The double podium came exactly 60 years after a pair of privateer Mercedes-Benz 300SL entries placed first and third in the GT 3500 class in the 1957 Sebring race.

A third Mercedes-AMG GT3 entry will be competing this weekend from P1 Motorsports, which will race in the 12 Hours of Sebring for the first time. The young team made its major endurance race debut in January’s Rolex 24 with a 12th place finish. Juan “JC” Perez, Kenton Koch and Loris Spinelli, who were all part of the Daytona effort, will be the No. 71’s driving trio this weekend at Sebring.

In addition to the trio of Mercedes-AMG GT3 competitors in the 12 Hours of Sebring, nine Mercedes-AMG Customer Racing teams will enter the new Mercedes-AMG GT4 in the two-hour Continental Tire SportsCar Challenge race at Sebring in the Grand Sport (GS) class.

Four debuting Mercedes-AMG GT4 finished in the top-10 in their first IMSA Continental Tire Challenge race at Daytona in January. Three different Mercedes-AMG GT4 teams each led several laps at the Daytona opener, while a fourth – the No. 57 Winward Racing/HTP Motorsport entry of Bryce Ward and Indy Dontje – was the first Mercedes-AMG GT4 across the finish line in fifth place.

Live coverage of the 66th running of the Mobil 1 Twelve Hours of Sebring begins this Saturday, March 17, with two hours of race-opening programming on FOX Sports 1 (FS1) at 10:30 a.m. EDT. Sister network FOX Sports 2 (FS2) picks up for the balance of the live programming from 12:30 p.m. to 3:40 p.m. EDT and again for the race’s final hours, finish and post-race coverage from 6 to 11 p.m. EDT.

FOX Sports GO will stream the race in the U.S. live in its entirety while international flag-to-flag coverage is available on IMSA.com in addition to IMSA Radio commentary on RadioLeMans.com and SiriusXM Radio.

Ben Keating, Driver – No. 33 Mercedes-AMG Team Riley Motorsports Mercedes-AMG GT3: “Last year’s win at Sebring was huge for us in many ways. It was the first Mercedes-AMG sports car win in IMSA competition and the first in the 12 Hour race at Sebring for a Mercedes-Benz in 60 years. As a team, we had been so close in previous years only to fall short each time, so it was extremely nice to finally claim a victory at Sebring. The 12 Hour race has such a great history, and it means so much to me personally to say that I’ve won the race. I expect the Mercedes-AMG GT3 to be strong at Sebring because this track suits our car more than most tracks. It handles the bumps well, it handles the high-speed turns well and it brakes well. The Mercedes-AMG GT3 likes Sebring but the field of competitors has become much better than last year. I expect the race to be closer this year than last. The GTD cars seem very closely balanced, but I still think the bumps at Sebring favor the Mercedes-AMG GT3. Many of the competitors run their cars so stiff that the bumps hurt traction. I love this race and the place. The history, the fans, the craziness, and the history of the crazy fans! The uniqueness of the track makes it interesting. The fact that there is nothing else like it makes it interesting, and I really love the long races. This is the second longest race we do, so I love the 12 hours of racing.”

Jeroen Bleekemolen, Driver – No. 33 Mercedes-AMG Team Riley Motorsports Mercedes-AMG GT3: “I have such good memories of our win last year. The race went perfect, we led most of it, and then right at the end we dropped down to third because of an unlucky yellow. I made a pass for the lead at Turn 17 and stayed out at front afterwards. Sebring is one of the biggest endurance races in the world, so to win it for Mercedes-AMG was really cool! The competition is going to be very hard as we look to repeat this year. Our car will be very heavy which means tire degradation will be higher too. But I know with a perfect race we can do really well. Sebring is probably the best track on the calendar for our Mercedes-AMG. So even with a lot of weight I expect we can fight for it, and that’s what we are going to do. I love this track. Its old school, has walls, bumps, everything. And you can feel the history. It’s one of my favorite races. The fans are amazing, the atmosphere is like nowhere else.”

Thomas Jaeger, Mercedes-AMG Motorsport Customer Racing Program Coordinator and Driver – No. 75 SunEnergy1 Racing Mercedes-AMG GT3: “We had a very positive test at Sebring two weeks ago and worked a lot on drivability and consistency in order to cope with the new Balance of Performance (BoP) regulations. The track is really demanding and challenging, but also a lot of fun, so I’m looking forward to the race. The Mercedes-AMG GT3 is an excellent endurance car, and with the right strategy a good result should be possible.”

Mikael Grenier, Driver – No. 75 SunEnergy1 Racing Mercedes-AMG GT3: “Sebring is an interesting track that I really like. I am very confident we will have a good car and improve from Daytona whatever our BoP will be. The Mercedes-AMG GT3 is a good car and should be strong around Sebring. A win would be fantastic, we have a great team, we are motivated and, if we minimize mistakes, anything is possible. We can only build on what we did in Daytona, and now having three of us race together again, it will make things a bit easier. Let's go racing and see what come out of it!”

Juan “JC” Perez, Driver – No. 71 P1 Motorsports Mercedes-AMG GT3: “We have been working very hard, the team the drivers, everybody. We had some issues at Daytona that prevented us from achieving a better result. First, I want to finish at Sebring. The top-five is going to be very hard but Loris and Kenton can climb us up there. The Mercedes-AMG GT3 shines the most over the bumps. It is great on the bumps but I just wish we had no weight added to the car. I love Sebring, this place for me is very special, and marks one year of racing for me. This place is not for the want-to-be racers. You come here and you are at the mercy of the bumps. You either work with them or they take you out.”

Kenton Koch, Driver – No. 71 P1 Motorsports Mercedes-AMG GT3: “I’m really confident we are going to have a strong effort at Sebring. We learned a lot from Daytona, and there were just a couple small things that didn’t help our result there. Since then, those issues have been fully addressed. We, as a whole, are ready to show what P1 Motorsports and the Mercedes-AMG GT3 can do. After doing a private test prior to the official test, we are pretty much as good as we are going to be. We showed what we felt like was good pace compared to others at the test. Sebring, historically, is good for this car and we can now see why. The Mercedes-AMG GT3 is extremely compliant with the beat-up runway and asphalt that makes some of those speed bumps just shameful. The racing is even better with the nature of the track. It’s truly a unique place compared to anywhere in the world. The party is immense – one can say the attraction is the energy the place gives off on Saturday, and the 12-hour race here beats the car up worse than most 24-hour races do.”