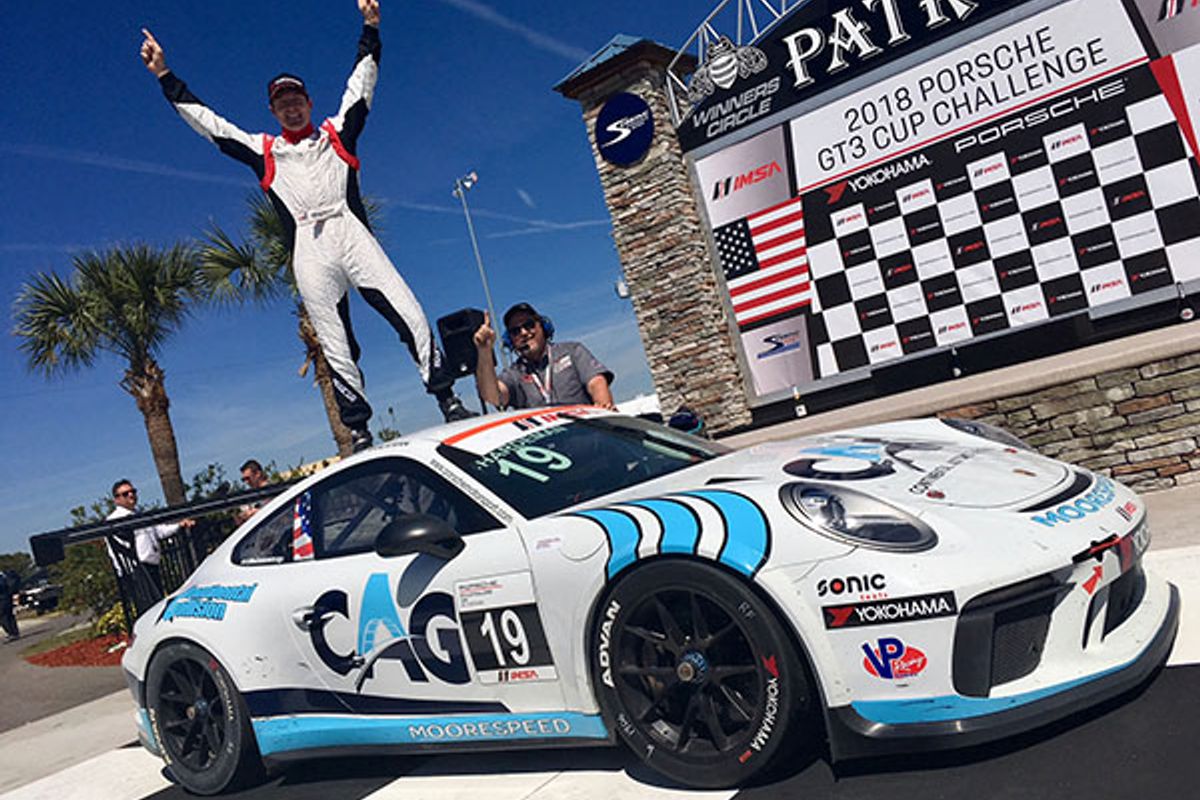 Will Hardeman and Moorespeed scored their first victory together in the IMSA Porsche GT3 Cup Challenge USA by Yokohama Friday in the second and final race of this week’s 2018 season-opening doubleheader on the legendary Sebring International Raceway road course.

Starting the No. 19 CAG/Moorespeed Porsche GT3 Cup sixth overall and fourth in the USA Platinum Cup division, Hardeman quickly moved up to third in class early in the race. He defended his position through two late-race restarts and was in a tight train of four race-leading cars running nose-to-tail in the final laps of the race when opportunity knocked. Hardeman pounced on the victory when the two race leaders tangled in the last turn on the final lap of the 45-minute sprint.

“I have been in this territory so often in the last few years when these things happen in front of you,” Hardeman said. “The leaders took each other out in the final corner and I was the beneficiary of that. It was pretty amazing, but if you are in that position long enough – if you are not already leading – you will get there eventually when the situation unfolds in front you.”

The victory was the first for Hardeman in IMSA Porsche GT3 Cup competition as he begins his fourth year in the competitive all-Porsche series, all with Moorespeed. Together, Hardeman and Moorespeed – both based in Austin, Texas – have posted more than a half-dozen top-two and top-three podium finishes over the last three seasons. Their first victory together Friday set the tone for what should be a breakout season in 2018.

“We're really proud of Will,” said Moorespeed President David Moore. “He didn't quit today and he didn't quit yesterday. We went back and regrouped and looked at everything and I said ‘man, you've got the pace. If you can just focus on being consistent and hitting your marks you can run right with those guys.’ The yellows came out, he had tires left and started putting it down. He got right up there and we had a feeling those guys might take each other out because they almost did yesterday.”

A dual-series doubleheader with GT3 Cup USA sharing the track with the sister GT3 Cup Canada series, Hardeman shined in some of the most intense competition IMSA’s all-Porsche classes have seen.

He moved up from 12th overall to sixth at the finish in Thursday’s opening sprint to finish fourth in USA Platinum Cup and earn the Yokohama Hard Charger Award for improving the most positions in the race.

“I kind of learned from some mistakes in yesterday’s race,” Hardeman said. “I was a little more aggressive today. After a couple of cautions, I bunched right up with the leaders at the end and was in the position I needed to be and took first place.”

Hardeman literally picked up where he left off Thursday at the start of today’s race, moving up in the order early and using his experience to be in a position for the victory while staying clear of the incident ahead. He snuck by the melee for the USA Platinum Cup win and a close second-place overall finish behind the Canada Platinum Cup and overall race winner.

“Will was right there and he had a shot at the overall victory too,” said Moore, who now has five career IMSA GT3 Platinum Cup victories with Moorespeed. “Getting his first win in USA Platinum Cup in Porsche GT3 has been due. I'm so happy for him, he's worked so hard, I'm very proud of him.”

A solid off-season testing schedule and almost daily simulator sessions first thing in the morning with Moore over the past year contributed to Hardeman’s hard-earned success.

“I have worked so hard to get to this level of driving in this series,” Hardeman said. “It is just so amazing, all of the hard work we have put in, my team, my family, all of the sacrifices we have made, it makes it just that much sweeter. This incredible feeling of elation is just washing over me. I couldn’t be happier!”

Next up for Moorespeed is Rounds 3 and 4 of the 2018 IMSA Porsche GT3 Cup Challenge USA by Yokohama at Barber Motorsports Park, April 19 – 22.

- Signs were everywhere that it was going to be the No. 19 Moorespeed team's and Hardeman's lucky week at Sebring. The team was assigned pit stall No. 19 and the number of the motor home spot where the Moorespeed motor coach parked was - you guessed it - No. 19!