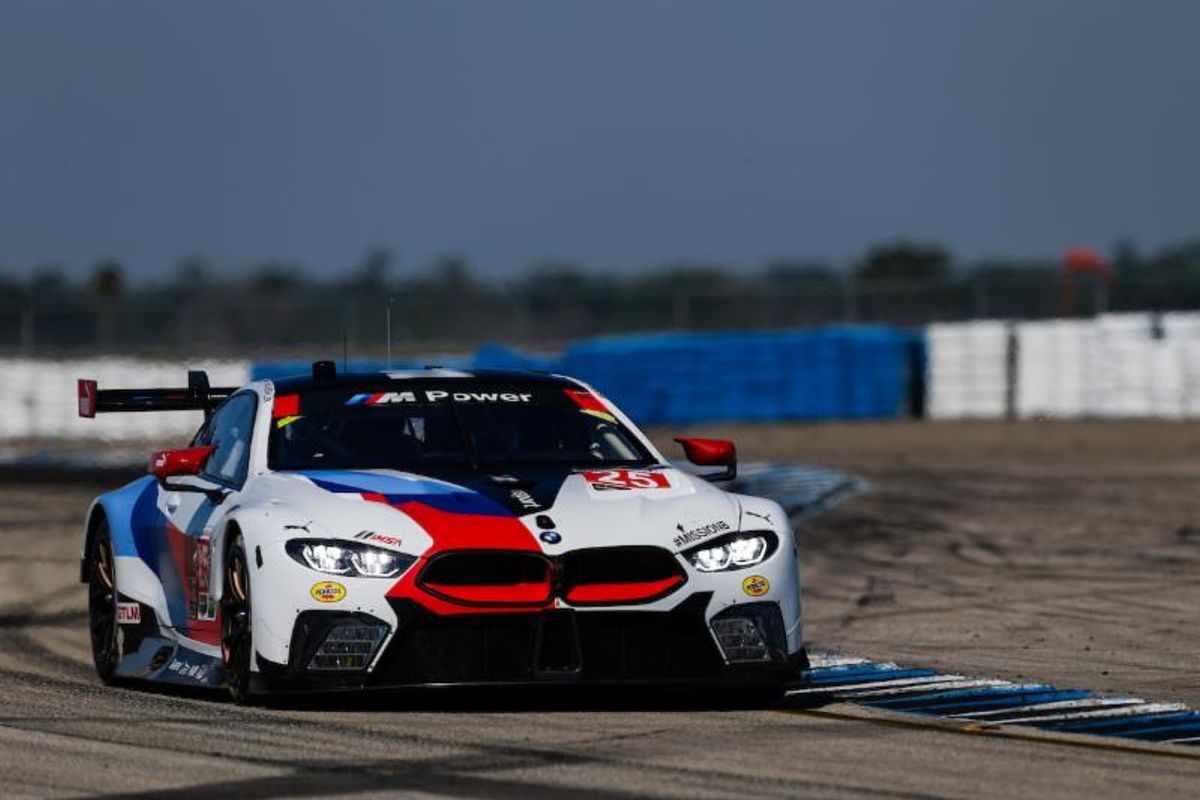 Connor De Phillippi delivered BMW Team RLL its first pole position of the season and the first pole in history for the new BMW M8 GTLM race car, bettering the No. 62 Ferrari driven by James Calado by only .058-seconds to earn the top starting spot for the GTLM class for Saturday’s Mobil 1 Twelve Hours of Sebring Presented by Advance Auto Parts.

“Not at all, to be honest,’’ De Phillippi said. “They said just go out there and drive as fast as you can and you see where we ended up. That’s kind of our motto throughout the year, not think too much about the others and just do the best we possibly can every session, every day.

“And obviously the outcome of hard work is a pole position.”

“We knew we’d be competitive this weekend based on where we’ve kind of fallen throughout the pack based on the practice sessions. I wouldn’t say we expected to be on pole, but I knew if we got all the pieces of the puzzle put together properly and I got a clean lap, we had a shot to be at least among the top cars and all that shook out the right way.”

It’s the first pole position for BMW since 2016 in the BUBBA burger Sports Car Grand Prix of Long Beach. In his first year as a BMW factory driver, De Phillippi was part of a ninth-place finishing effort for Rahal in the season-opening Rolex 24 at Daytona in January.

He finished fourth in the GT3 class last year at Sebring driving an Audi. De Phillippi conceded the changing weather conditions should make his BMW debut at the historic 3.7-mile, 17-turn Sebring International Raceway interesting. The car is fast, he can be certain.

Temperatures are expected to be close to 80 degrees on Saturday after being nearly 20 degrees cooler all week.

“It seems to be getting warmer through the weekend,’’ De Phillippi said. “I think that will definitely change things up. Nobody really knows what his car will do when it gets really hot.

“All the testing days have been cooler and now it’s gradually increased here. I think it will be a curve ball for the first half of the race for everybody. But obviously, it ends in the night and the car was really good in the night yesterday.

“The important thing is we’ll be in good position at night. It’s just about running the clean laps in the beginning, keeping all four wheels on the car and be ready to battle at the end.’’

The Ferrari will start alongside the Audi R8 LMS GT3 driven by Christopher Mies – the difference between them only a half second. Jack Hawksworth was third fastest in the session in the No. 15 3GT Racing Lexus RC F GT3.

Leadership changed multiple times in the 15-minute session before the 33-year old Serra – a GTE class 24 Hours of LeMans winner last year — laid down his fast lap with less than three minutes remaining.

“It was an awesome session and I enjoyed every corner,’’ said Serra, whose only other start in the 12 Hours of Sebring was two years ago –when he finished seventh in a GTLM class Ferrari.

“In the morning and the lap we did yesterday I could feel the car was good, it was just a matter of putting all the sectors together. I knew we could do a good lap this morning. Audi was really fast as well. I thought it would be more close, but the advantage was almost half a second. I think we could predict the balance better than the others.”

Unlike most teams who will be cycling through three drivers, Serra’s team will split the race among four drivers – something he said the team has been working on.

“We are racing four drivers, so track time before qualifying was not a lot because we needed to change for four,’’ Serra explained. “The other cars are using three drivers.

“We have to work a lot on strategy because racing of four drivers, so the driving time is a bit tricky. But I think the team will figure out a way for good strategy though.’’

Vautier set yet another track record in the Prototype class winning the overall pole position with a fast lap of 1:47.432 in the No. 90 Spirit of Daytona Racing Cadillac DPi. He’ll start alongside Oliver Pla in the No. 2 Tequila Patron Nisssan DPi on the front row – leading the field of 42 cars to the green flag Saturday.

American Connor De Phillippi won the pole for the nine-car GTLM class in the closest grid competition of the day, securing the lead spot by .058-seconds over the Ferrari driven by Brit James Calado.