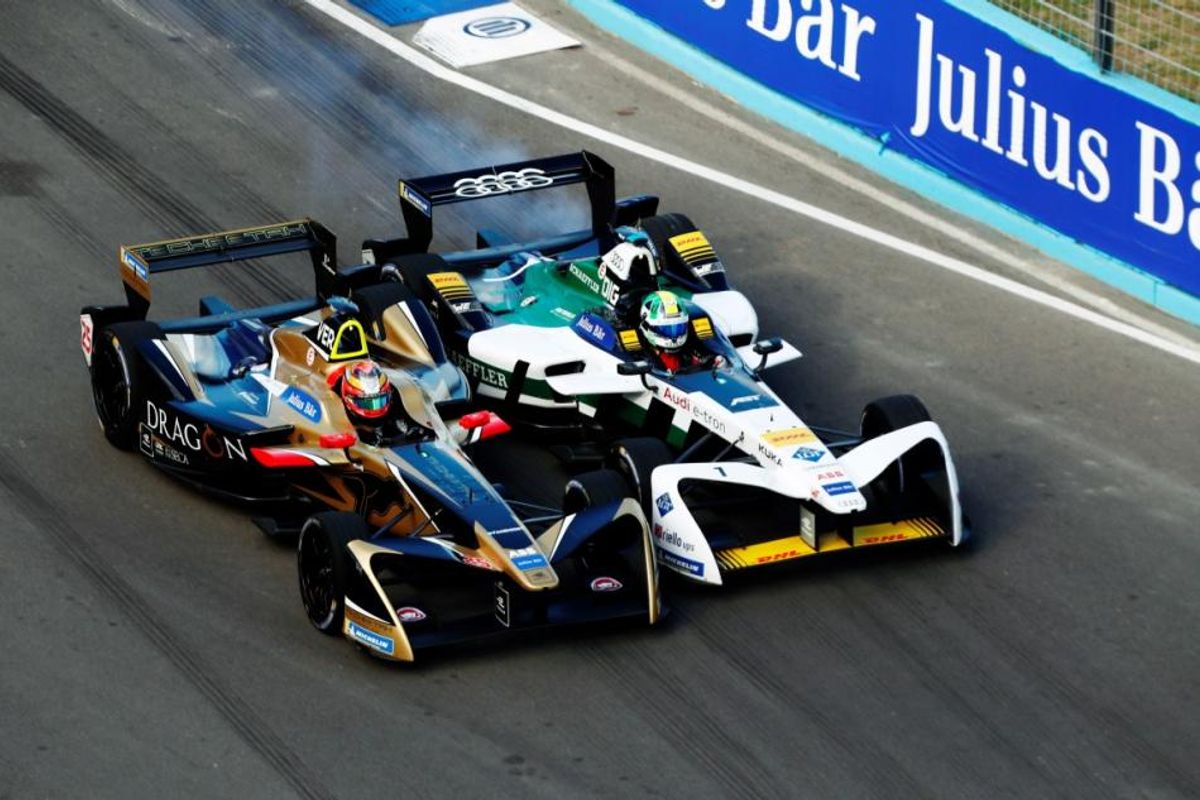 Jean-Eric Vergne scored an impressive lights-to-flag victory yesterday, 17 March, in the Punta del Este E-Prix – round six of the 2017/18 ABB FIA Formula E Championship. The TECHEETAH driver had to work hard for his second win of the season, as he was chased right from the start by reigning champion Lucas di Grassi in his Audi Sport Abt Schaeffler machine.

Earlier in the day, fans were treated to a flat-out qualifying session, although as the intensity rose in Superpole, a number of drivers exceeded track limits resulting in a shuffling of the order before the grid formed up. This resulted in Vergne and di Grassi on the front row, with DS Virgin Racing’s Alex Lynn and NIO Formula E Team’s Oliver Turvey on the second row.

As the lights went out, the front runngers made it through the first few corners in grid order, but the race was quickly neutralised by a safety car period to recover the stricken car of Nick Heidfeld, whose Mahindra stopped on track with a technical problem.

After racing resumed, Renault e.dams’ Sebastien Buemi, who had made it back through on Vergne’s team-mate Andre Lotterer after being passed early on, saw his streak of two wins in Punta del Este come to an end as he clipped the wall on lap 11. This damaged the rear of the car and forcing him to retire.

Back at the front, the Brazilian driver di Grassi was right under the rear wing of the leader, and as the two entered the pit lane for their mandatory car change there was nothing between them. They exited the pits as they entered them, and on the out-lap di Grassi drew alongside Vergne but he was unable to make the move stick. Despite losing time in the attempted move, it wasn’t long before he was putting pressure on Vergne once again, and this was to be the story of the remainder of the race. Di Grassi repeatedly came within inches of the lead, but ultimately the Frenchman in front held on to take the chequered flag in first place.

Behind the lead pair there was another tight battle, this time between the DS Virgin Racing team-mates Alex Lynn and Sam Bird. Bird started the race in ninth, but quickly made up positions and ended up leap-frogging his stable-mate who faded in the latter stages. Bird latched onto the back of the fighting front two, but while he was ready to make the most of any incidents ahead, ultimately he secured a well-earned return to the podium in third place.

Despite falling back, Lynn still took his best finish of the season so far in sixth.

One of the stand-out performances of the day came from Panasonic Jaguar Racing’s Mitch Evans, who had qualified on the front row but was penalised as the weight distribution did not conform to the technical regulations. This meant he had to fight through from 16th place to an impressive fourth, with a sensational pass on Alex Lynn one of the highlights of the race.

Mahindra’s Felix Rosenqvist finished in fifth place and, like Evans, had a strong fight through the field after a difficult morning for the team, which has been in strong form since the start of the year.

Englishman Oliver Turvey couldn’t replicate his maiden podium last time out in Mexico for the NIO team and collected a handful of points a place further back in seventh.

Another storming drive to finish in the points came from Argentinean Jose Maria Lopez. The DRAGON driver sat on the penultimate row of the grid as the lights went out and fought his way through to finish in a valiant eighth position. Lopez also took the honour of setting fastest lap and earning an extra point.

Jerome D’Ambrosio jumped up a couple of place in ninth and Maro Engel rounded-out the top-10 with the final point for Venturi.

The next round of the 2017/18 ABB FIA Formula E Championship will see the all-electric series race on the streets of Rome for the first time on 14 April.

Jean-Eric Vergne, TECHEETAH, said: “I’m obviously very happy. I’m not focussing on the championship, but I’m focussing on each race. Obviously winning the race today in those conditions is to me one of the best drives. Racing against Lucas, who is the current title holder, was really tough. I don’t think I’ve won that many races but it was one of the ones I’m most happy with in terms of my driving. Today winning races proves that hard work pays off. We’re the only private team and for us to beat the other guys, we have to work twice as hard as them.”

Lucas di Grassi, Audi Sport ABT Schaeffler, said: “First of all, congratulations to Jean-Eric and Sam. For Jean-Eric on the win, but for Sam to come from ninth on the grid. It was a really tough race for me, and to be honest JEV didn’t make many mistakes, I tried very hard - and I had the fastest car today. Starting second, on the dirty side, I tried very hard at the end to overtake him. I’m very satisfied with the car that I have but today we could’ve got 20 points and we only got 18. We know that in Formula E, when you get the chance you have to grab it. JEV defended very well so there was very little margin for me to attack, I think he did a small mistake coming into the last sector - we ended up touching a little bit and got super close. I tried my best, the car was super competitive - that won’t be the last time the team will fight for victories.”

Sam Bird, DS Virgin Racing, said: “We were a little bit fortunate with Buemi having an issue, getting damage. I don’t know what happened to Daniel in the second stint, but that was again another position gifted to me. The pace was good today to be fair, I just wanted these two to fight a little bit more. I ran out of laps but a very strong race, it was nice to get another podium and we needed it from where we started. It was damage limitation in the championship as JEV is streaking away as he did an amazing job, and it’s great to see Lucas back on it too. One thing I would like to say is last week, Britain lost an amazing journalist - a great man who brought so much energy to others. It’s not a win, it’s the best I could do, but I would like to dedicate this to Henry Hope-Frost.”