Fantastic win for Dovizioso in MotoGP of Qatar 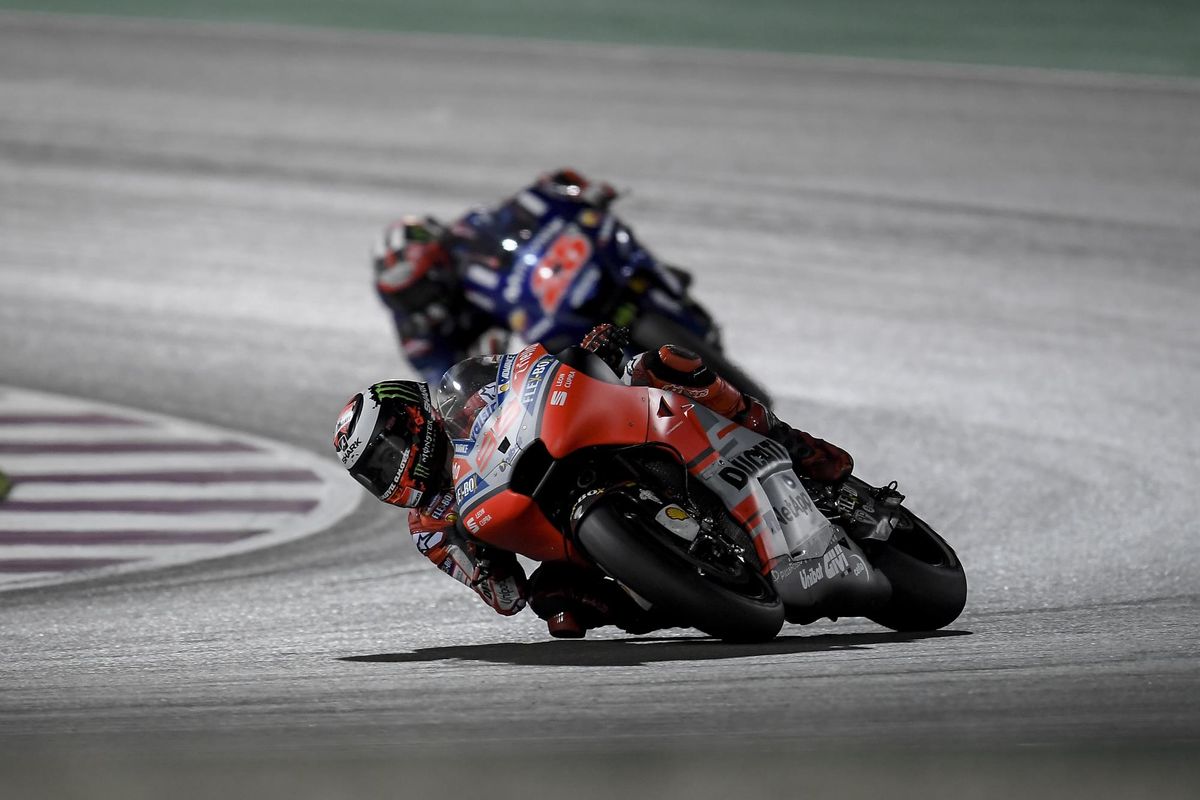 The Italian rider, with eight wins to his name, becomes the second most successful Ducati rider of all time in MotoGP, after Stoner. Lorenzo forced to retire after a crash caused by a technical problem

Andrea Dovizioso scored a splendid victory in the Grand Prix of Qatar, the opening round of the 2018 MotoGP World Championship held this evening at the Losail International Circuit.

The Ducati Team’s Italian rider, who started from row 2, was unable to get a good start when the lights went out and he crossed the line at the end of the opening lap in seventh place. Dovizioso then moved up into the leading group, battling with Marquez, Rossi and Zarco and then took over at the front on lap 18, followed closely by the Spanish rider who tried an attack at the final curve. Andrea once again was able to get through on the inside and taking advantage of the acceleration of his Desmosedici GP18, he crossed the line 0.027s ahead of his Honda rival.

Thanks to today’s win Dovizioso has overtaken Loris Capirossi in the list of most victorious Ducati riders in MotoGP with eight wins to his name, and is now in second place in this particular ranking behind Casey Stoner.

It was an unfortunate race for Jorge Lorenzo, who started from row 3 with ninth-quickest time. The Spanish rider, after a complicated start, had managed to get up to tenth place together with Viñales and Miller on lap 12. Unfortunately a technical problem on the next lap caused him to crash and he had to retire.

Andrea Dovizioso (Ducati Team #04) – 1st
“I’m really happy with this win because we have confirmed the improvements made over the winter and I was able to manage the race well, even though I made a really bad start. On the first lap I had to come off the gas, otherwise I would have crashed into Rins I think, but then I began to make up places, trying not to ruin the tyres.. Towards the end, after passing Zarco, I tried to pull out a gap on Marquez and Rossi but I didn’t have any more grip and was unable to increase my lead. At the last curve I had to be very careful because I knew that Marquez would try and pass me, and that’s how it went. He closed the door on me even more than in Austria and Japan, but I passed him on the inside of the kerb and then took advantage of the power of my Desmosedici to stay ahead. Once again it was a great satisfaction!”

Jorge Lorenzo (Ducati Team #99) – DNF
“It wasn’t one of the best weekends for me. I had a lot of problems and my crash was the result of a problem with the front brakes. Already on lap 2 I realized that something wasn’t right and I tried to manage the situation, but the problem was getting worse. I thought it was an overheating problem, but when I was about to catch Iannone I wasn’t able to stop the bike and I tipped myself off to avoid worse damage. Now we have to understand what exactly happened to prevent the same problem from repeating itself in the future. It’s a pity because I was lapping with good times and I think I could have got closer to the leading group.”

Claudio Domenicali (CEO of Ducati Motor Holding S.p.A.)
“It was a fantastic race! MotoGP is getting better and better because there are a lot of really competitive riders, but here at Losail our bike was in great shape and was really fast. Andrea rode so well, despite a bit of a difficult start, and by now he’s demonstrating he has an extraordinary racing maturity and great confidence in his bike, which allowed him to manage the race perfectly. Marquez and Rossi were also great today, but DesmoDovi had just that little bit more. Pity about Jorge, who was recovering well when unfortunately he crashed. This is the first round of the 2018 championship and I want to dedicate this victory to all the guys in Ducati and Ducati Corse and thank them for their commitment which has enabled us to produce this Desmosedici GP18, which already seems to be in excellent form!”