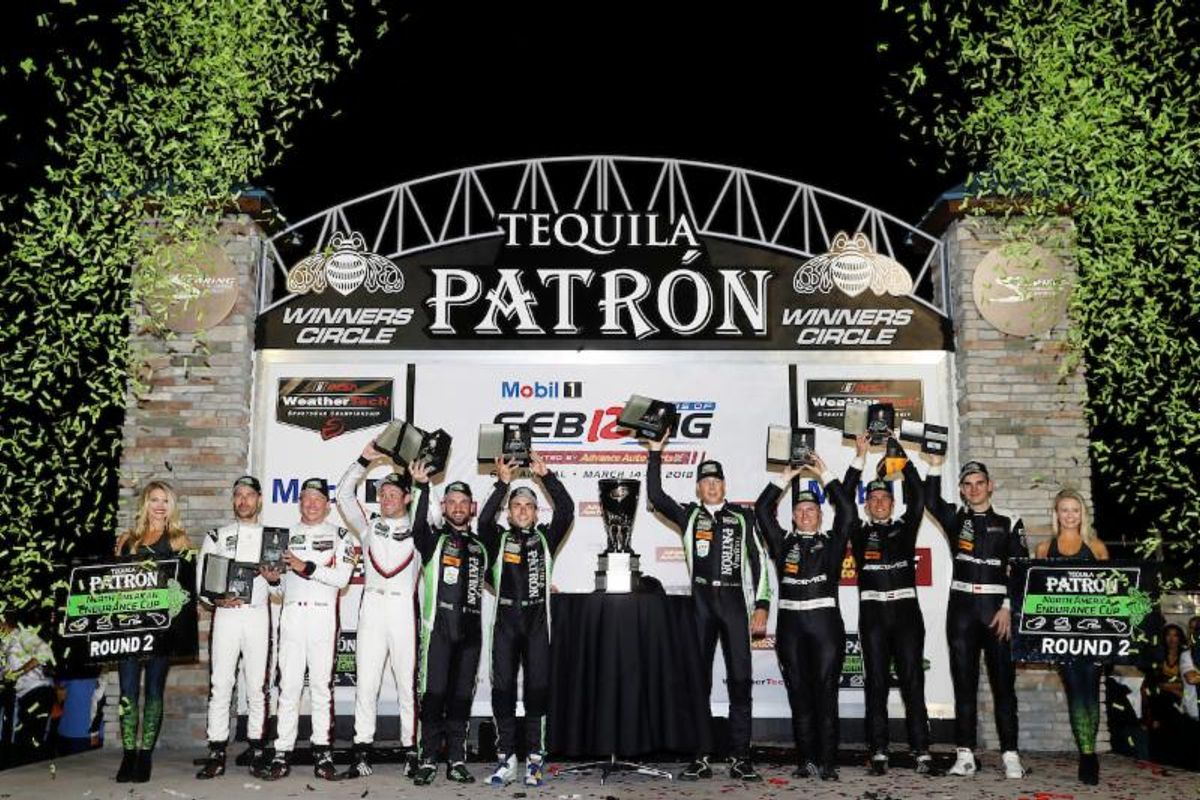 While we’ve only had two races thus far in the 2018 IMSA WeatherTech SportsCar Championship and there’s still a long way to go, we’ve already passed the halfway point in terms of point-scoring opportunities toward the Tequila Patrón North American Endurance Cup.

The Patrón Endurance Cup recognizes the top performers in the four endurance races on the WeatherTech Championship schedule, January’s Rolex 24 At Daytona, the Mobil 1 Twelve Hours of Sebring Presented by Advance Auto Parts – which was run last Saturday – the Sahlen’s Six Hours of The Glen coming up on July 1, and the season-ending Motul Petit Le Mans at Road Atlanta on Oct. 13.

Points toward the Patrón Endurance Cup standings are awarded at strategic intervals in each race – every six hours at the Rolex 24, after each four-hour segment at Sebring, at halfway and the finish at Watkins Glen, and at the four- and eight-hour mark, as well as the finish at the Motul Petit Le Mans. At each interval, the leader in each class receives five points, with four points for second place, three points for third and two points for every other car in the field from fourth on back.

So, with points having been awarded seven times already this season and with five more Patrón Endurance Cup scoring opportunities ahead, where do we stand?

In the Prototype class, it’s a very familiar team – albeit a different car than usual – leading the way. Action Express Racing, which has won all four previous Patrón Endurance Cups since the award’s inception back in 2014 with its No. 5 Mustang Sampling team, tops the charts this time around with the No. 31 Whelen Engineering Cadillac DPi-V.R squad and drivers Eric Curran, Felipe Nasr and Mike Conway.

A key contributor to the No. 31 team’s position in the standings is its runner-up result at Daytona and a third-place finish at Sebring. However, the team has scored the maximum five points at two different intervals so far – at the six-hour mark in Daytona and after eight hours at Sebring – and has only scored the minimum two points once so far, after Hour 4 at Sebring.

The No. 31 team has a six-point lead, 27-21, over – yep, you guessed it – the No. 5 Mustang Sampling Cadillac DPi team of Joao Barbosa, Filipe Albuquerque and Christian Fittipaldi, winners of the 2018 Rolex 24 At Daytona. In third place, one point behind the No. 5 team, is the No. 7 Acura Team Penske Acura ARX-05 DPi team of Ricky Taylor, Helio Castroneves and Graham Rahal. It’s still anybody’s race, though, with 16 Prototype teams still in mathematical contention.

The Prototype manufacturers’ race for the Patrón Endurance Cup is even closer. Just four points separate Cadillac, which has 30, from second-place Acura.

Teammates also hold down the top-two spots in the GT Le Mans (GTLM) Patrón Endurance Cup standings. Leading the way on the strength of three, five-point segments and a runner-up race result in the Rolex 24 is the No. 66 Ford Chip Ganassi Ford GT and co-drivers Joey Hand, Dirk Mueller and Sebastien Bourdais.

Just one point, 25-24, separates the No. 66 team from the No. 67 Ford GT trio of 2018 Rolex 24 winners, Richard Westbrook, Ryan Briscoe and Scott Dixon. In third place, four points behind the leaders, are the No. 911 Porsche GT Team trio of Sebring winners Nick Tandy, Patrick Pilet and Frederic Makowiecki.

All nine GTLM cars that competed in both of this season’s races to date are still in mathematical contention for the Patrón Endurance Cup. In the manufacturer battle, Ford leads Porsche by four points, 28-24, with Chevrolet one point behind in third.

In the GT Daytona (GTD) class, it’s another group of familiar faces in the the lead. Two-time class Patrón Endurance Cup-winning Riley Motorsports-Team AMG leads the way with its No. 33 Mercedes-AMG GT3 co-driven by Ben Keating, Jeroen Bleekemolen and Luca Stolz.

Last year, Keating and Bleekemolen took the title – the first for Mercedes-AMG – and in 2015, co-drivers Al Carter and Cameron Lawrence won it in the team’s No. 93 Dodge Viper. This year, the No. 33 Mercedes team – which finished third at Sebring and has scored the maximum five points in two different intervals so far – has a three-point lead, 24-21, over a tie for second.

One of those teams is the No. 86 Michael Shank Racing with Curb-Agajanian Acura NSX GT3 program with drivers Katherine Legge, Alvaro Parente and Trent Hindman. The other is the Sebring-winning No. 48 Paul Miller Racing Lamborghini Huracán GT3 and full-season drivers Bryan Sellers and Madison Snow.

The Patrón Endurance Cup manufacturers’ race looks a little different, as Lamborghini has company atop the standings in last year’s winner, Mercedes-AMG. Both manufacturers have 25 points each, two more than Acura. This year, Lamborghini became the first manufacturer in series history to win the GTD class at both Daytona and Sebring in the same year.

“Lamborghini are delighted to be the first OEM in the modern GT3 era to win Daytona and Sebring back to back in the GTD class,” said Lamborghini Senior Manager, Motorsport, Chris Ward.