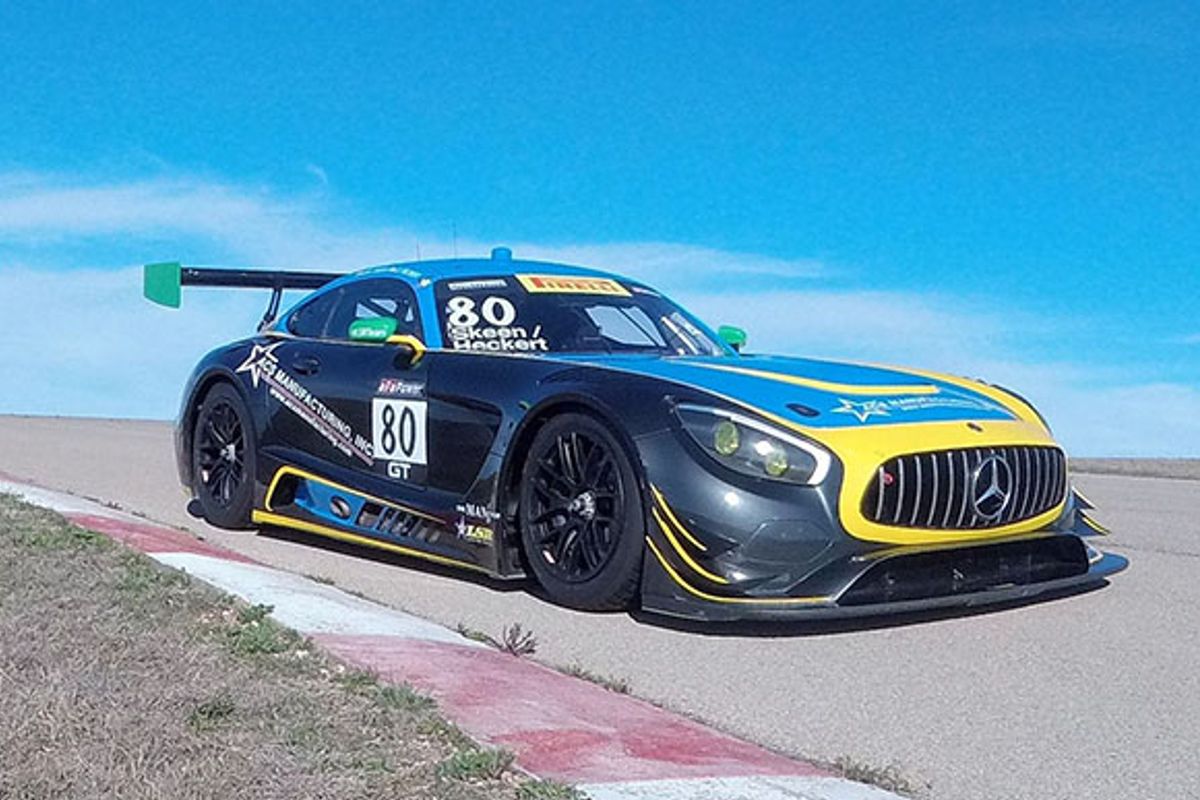 at COTA and VIR with Mike Skeen and Scott Heckert in No. 80 ACS Manufacturing/Lone Star Racing Mercedes-AMG GT3

Lone Star Racing will compete in the opening rounds of the 2018 Pirelli World Challenge SprintX Championship in the No. 80 ACS Manufacturing/Lone Star Racing Mercedes-AMG GT3 with the new driver pairing of Mike Skeen and Scott Heckert.

The SprintX races, this weekend at Circuit of The Americas (COTA) and next month at VIRginia International Raceway (VIR), are the first announced events in Lone Star Racing’s select schedule of planned races in 2018.

Top GT driver Skeen begins his third year with Lone Star Racing while Heckert, a former Pirelli World Challenge race winner who competed in 2017 in a Mercedes-AMG GT3 in Europe, will fill-in for Lone Star Racing team owner and driver Dan Knox at COTA and VIR.

“Big thanks to Dan Knox for giving me the opportunity to get in this car and having the faith in me to compete with this team,” Heckert said. “This is my first race in the Pirelli World Challenge GT division. Back in 2016 I competed in a few GTS races and had wins at Utah and Laguna Seca, so I am really excited to get back to the series. It is a really competitive platform and I am excited to get back to it.”

The COTA race will be the first time Lone Star Racing has ever competed without Knox as a driver.

“This is the first time we have run a race without Dan in the seat,” said Lone Star Racing Team Manager AJ Petersen. “It will be a different experience, but we are very thankful he has the confidence to be in the team ownership role and give some opportunities to deserving young talent.”

Skeen has raced with Lone Star at COTA each of the last two years and, along with fellow Charlotte-area resident Heckert, will return with the team to his home track of VIR next month for the third time. With VIR located right on the Northern border of North Carolina just over the Virginia state line, many Charlotte-area residents consider VIR a home track.

“I am looking forward to this weekend at COTA and feel very confident going into VIR,” said Skeen, who won the SprintX pole driving for another team last year at VIR. “I know Scott has also driven there, so we should be strong, and the Mercedes-AMG GT3 should do really well there. It will be a great event, and it is always fun doing it in front of your home crowd.”

Lone Star is stepping up to the top-tier SprintX GT Pro/Pro class for the COTA and VIR races.

“We are definitely optimistic about this weekend, but it is measured optimism,” Petersen said. “There is still some really stiff competition in Pirelli World Challenge, and we deliberately chose to run in the GT Pro/Pro category. We want to be tested, that is just the fabric of our team, we like to challenge ourselves and can in the top Pro class.”

Heckert co-drove in the Blancpain Endurance Series in Europe last season in a Mercedes-AMG GT3 prepared by the premier Black Falcon team.

“I had five races last year in the Mercedes-AMG GT3 in Europe in the Blancpain Series,” Heckert said. “It is a great race car all around, always pretty well behaved and a great way to learn the GT3 platform. This will be my first outing at COTA but it definitely has some European-style qualities that will be familiar. I have also done about 1,000 laps on iRacing so I at least know what direction to go!”

Skeen also competed in a Mercedes-AMG GT3 in a pair of 2017 Blancpain Endurance races, in addition to four events in Lone Star’s No. 80 ACS Manufacturing Mercedes-AMG GT3.

“It is always good going into race weekends with a Pro/Pro lineup and really get going for it from the start and feeling we have a good competitive level in the team,” Skeen said. “The whole series is well developed at the front of the field, we have a lot of competition that we are going up against, but we are hopeful we can come out and show well.”

Lone Star’s two-race start to its select schedule of 2018 events in multiple series is a deliberate plan they have followed the last two seasons, with additional races expected to be added in the near future.

“The budgets in GT3 are high and it requires some outside help as far as partnerships and other creative ways to put programs together,” Petersen said. “We are trying to be strategic in the events we do in all series to help cultivate some of these partnerships.”

This weekend’s COTA schedule includes unofficial testing today, Thursday, March 22, and official practice on Friday, March 23. Saturday, March 24, starts with SprintX GT qualifying in the morning and the first of the weekend’s two races that afternoon at 3:45 p.m. CDT. Sunday’s second and final one-hour race is scheduled to start at 2:10 p.m. CDT.