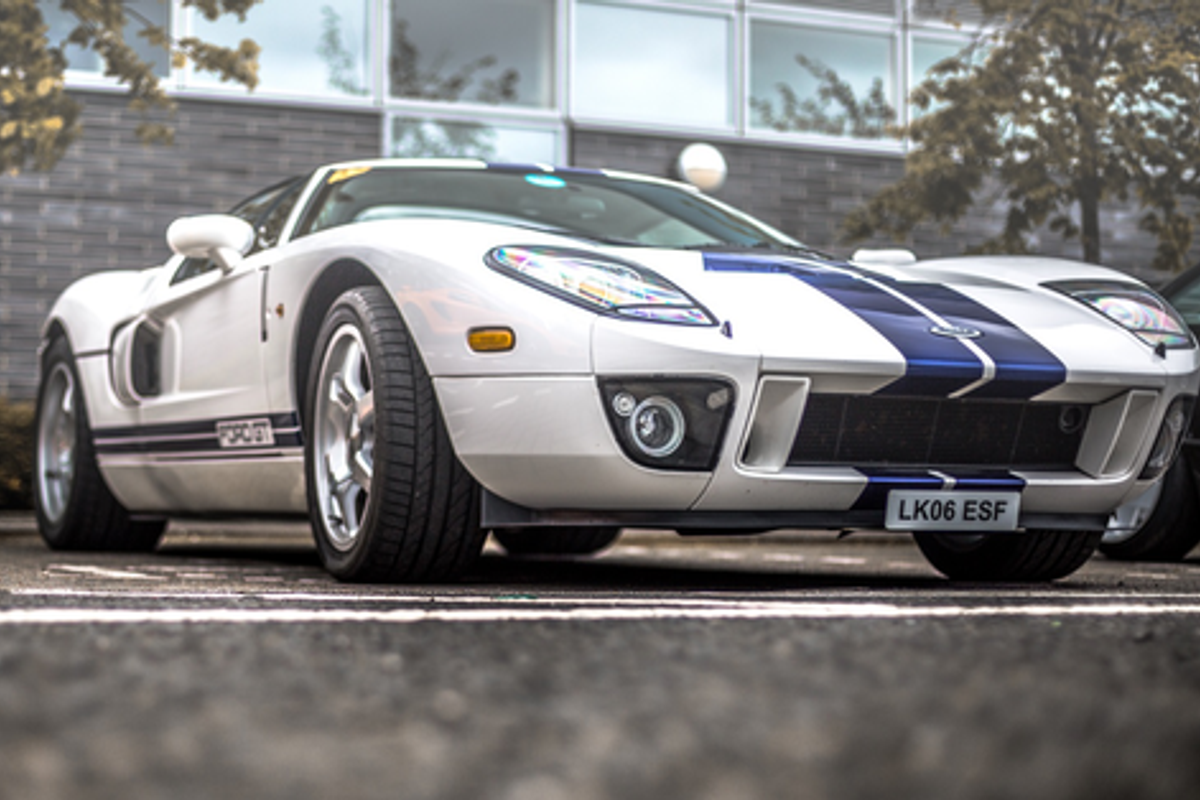 This very special Ford GT is one of only 27 UK-supplied cars
Powered by a mid-mounted, hand-built, supercharged, quad-cam, 550bhp V8, the Ford GT delivers outstanding power and performance
Evocative colour combination of white with racing blue stripes
Only 5,000 miles from new. Most recent service carried out by Ford GT specialists, GT101, 250 miles ago.
In Ford Motor Company's long and hugely successful history in motorsport, few events are as memorable and important as their GT40's four consecutive overall victories at Le Mans in the mid-1960s. The impetus to build Le Mans cars to compete with Ferrari undoubtedly stemmed from their Henry Ford II's failed attempts to acquire the Modena firm and an understandably frustrated Ford enlisted Eric Broadley, John Wyer and later, Carroll Shelby to build a racing car with one clear mission: to beat Ferrari at Le Mans. With their goals set high and ultimately achieved, the GT40 became the most successful and latterly iconic 'underdog' in Le Mans history.

Arriving in prototype form, just in time for Ford's Centennial celebrations in 2003, the new Ford GT was a little larger than its predecessor and borrowed heavily from the stunning design and profile of the GT40. It was tasked with a  similar mission: to compete with, and surpass, the established European 'supercars'.

The ultra-high performance Ford GT showcases the finest in advanced technologies, constructed on a lightweight aluminium chassis clothed in superplastic-formed lightweight composite and aluminium body panels. Powered by a mid-mounted, hand-built, supercharged quad-cam 550bhp V8 engine mated to a 6-speed manual transaxle and featuring racing-derived suspension and braking systems, the GT is hugely powerful and delivers astounding performance. It can accelerate from 0-60 in about 3.5 seconds, hurtling on to some 205mph before the speed limiter kicks in. When production ceased in 2006, with just over 4,000 Ford GTs produced and only 101 delivered new to Europe, this epic Ford had made its mark on automotive history once again - and became an instant collector's car.

This very special Ford GT is one of only 27 UK-delivered examples and is finished in the evocative colour combination of white with the racing blue stripe. Purchased by our private vendor in 2014, this car has only covered just over 5,000 miles from new, only just over 250 of these since its last service by marquee specialist, GT101. GT101 have, in fact, carried out the last two services on the car and the tyres were fitted only 2,300 miles ago.

This very special and rare example is in superb condition and, we understand, is original with no modifications or upgrades. Enjoyed by our passionate vendor for the past four years, including memorable trips to Le Mans, this dramatic motor car is ready to be used and enjoyed by its next owner with many more miles of loud and fun motoring. Given its inimitable heritage, prolific performance, stunning design, and the thrilling driving experience, the Ford GT is a very special creation that will undoubtedly be revered for many years to come.

Auction Date 19th May  - Other confirmed lots include: