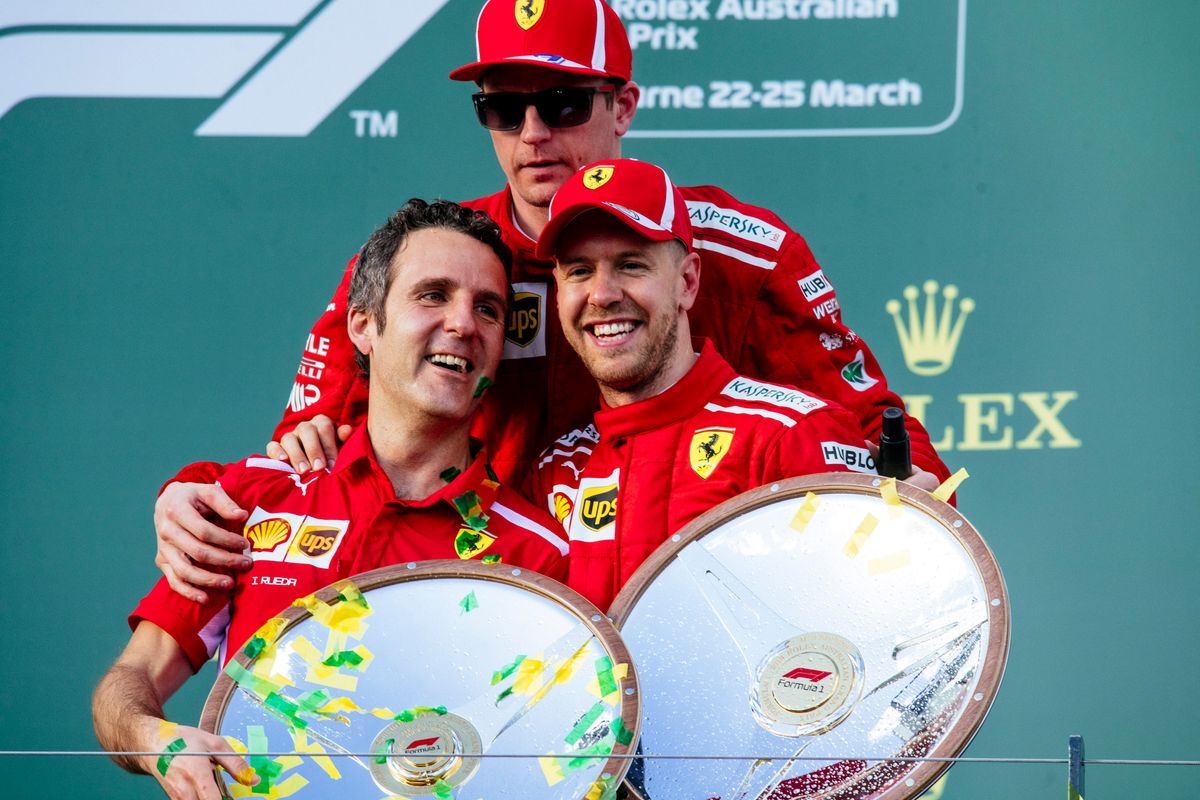 Hamilton led away comfortably at the start, dismissing a brief challenger from Raikkonen as they made their way through the first corners. Vettel held third place but behind Haas’ Kevin Magnussen got the jump on Verstappen who dropped to fifth ahead of Grosjean, Hulkenberg and Ricciardo.

At the back of the field, Toro Rosso’s Brendon Hartley had a major lock-up into Turn 1 and pitted at the end of lap one. The New Zealander took on soft tyres in a bid to reach the end of the race on the yellow-banded set.

Ricciardo was soon past Hulkenberg to take P7, but further ahead team-mate Verstappen was struggling to put pressure on Magnussen. The result was a rapidly degrading set of tyres and on lap 10 the Dutchman lost control into Turn 1 and spun. He dropped to eight behind Hulkenberg.

At the front Hamilton was attempting to build a gap, but both Raikkonen and Vettel were tenaciously hanging on and by the end of lap 15 Hamilton only had three seconds in hand over the Ferraris.

On lap 22 Magnussen made his first stop of the race, but almost immediately afterwards he pulled over at the side of the track. The Dane reported an engine issue but Race Control later stated that the team had possibly released Magnussen unsafely.

That boosted team-mate Grosjean to fourth but under pressure from Ricciardo and on fading ultrasofts the Frenchman also pitted. Again though, as soon as he rejoined the circuit, he immediately pulled over and stopped in a mirror image of the Magnussen incident, this time with the front left wheel of Grosjean’s car not being properly attached.

With Grosjean’s car at the trackside on lap 24 the Virtual Safety Car was deployed. Ferrari seized the opportunity and pitted Vettel for soft tyres. Hamilton, though, lost a huge amount of time under the VSC and when Vettel emerged from the pit lane he swept into the lead.

The VSC was replaced by the real thing as Grosjean’s car was cleared and when racing resumed Vettel held his lead over Hamilton, with Raikkonen third and Ricciardo fourth. McLaren’s Fernando Alonso had vaulted up to fifth place under the SC and was being shadowed by Verstappen who had also recovered from his early woes.

The second half of the race became a cat and mouse battle between the Ferrari ande Mercedes driver, with Hamilton regularly getting to within DRS range of the leader only for Vettel to drag the gap back out to beyond a second.

Six seconds further back, Raikkonen was keep Ricciardo at bay in the same manner, with the Australian getting to within DRS range and the Finn pulling away as he carefully managed his defence of the final podium position.

Behind them, in the battle for fifth place, a little under two seconds covered three Renault-powered drivers in the closing stage, with Fernando Alonso leading Verstappen and Hulkenberg.

With 10 laps remaining Hamilton got on the radio to his team saying that he was going to attack for the lead. The attempt came to nothing, however, as the Briton suffered a heavy lock-up at Turn 9, losing almost two seconds to Vettel.

He clawed half that back over the next two laps and with seven laps remaining was 1.5s behind Vettel. A lap later and the deficit was just one second.

But there Hamilton’s charge ended. On the next tour he was 1.3 slower than Vettel and then drifted to 4.4s off the Ferrari, and having been warned about high engine temperatures, Hamilton voted to save the engine on his car and settled for a safe second place.

A handful of laps later Vettel crossed the line to take his 48th career win ahead of the Briton. Raikkonen clung on to third place ahead of Ricciardo, while Alonso gave McLaren a positive start to life with Renault power by keeping Verstappen at bay to take fifth place. With the Dutchman sixth, Hulkenberg finished seventh ahead of Mercedes’ Valtteri Bottas, McLaren’s Stoffel Vandoorne. The final points position went to Renault’s Carlos Sainz, who battled to the finish despite suffering from nausea caused by the fluid in his drinks bottle during the race.