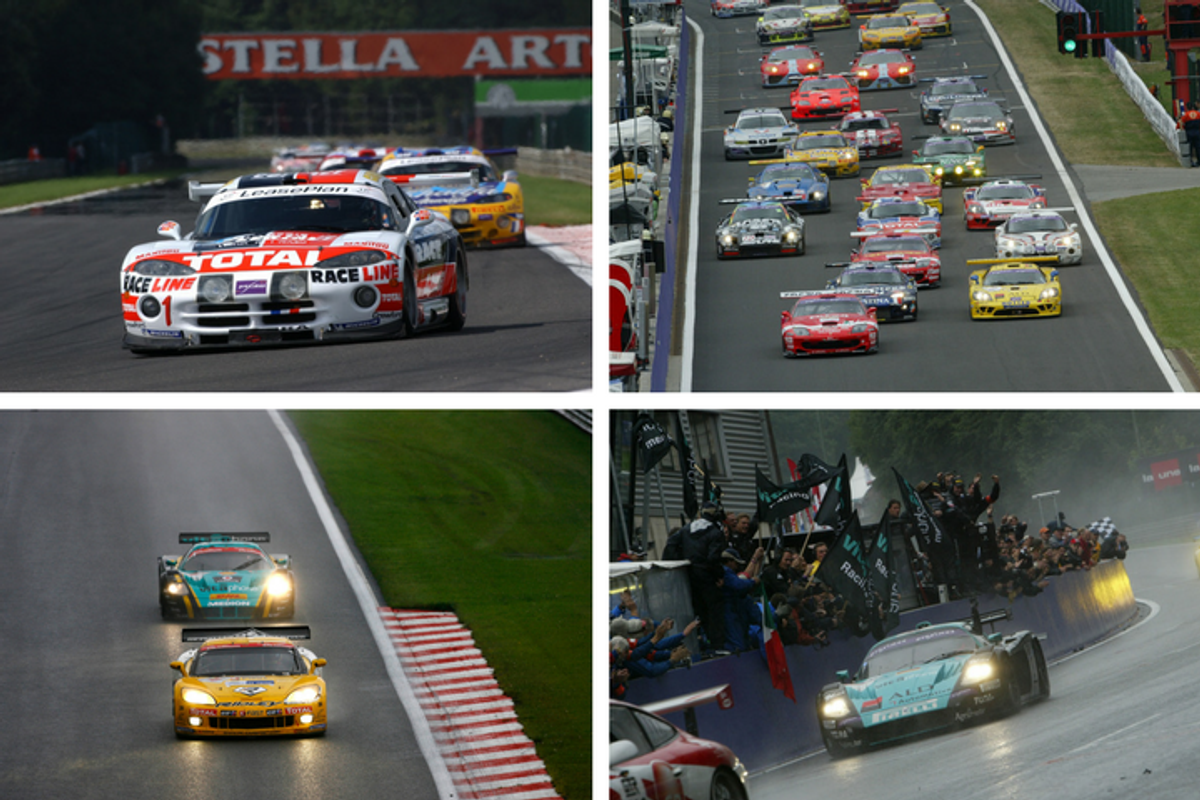 In 2018 the Total 24 Hours of Spa celebrates its 70th edition. Through the years, the endurance classic produced some of the highlights of international long-distance racing. In this three-part series, we take a closer look at the history of the event.

Part III: 2001-2017
2001 saw the start of a new and exciting era for the Spa 24 Hours. No more touring cars, super touring cars or super production cars, it was time to give the GT machines of the FIA GT Championship their own 24-hour race.

The spectacular, aggressive and powerful cars immediately impressed the fans, especially the monstrous Chrysler Viper. The American machine, equipped with a huge V10 engine, was entered by first-class teams such as Larbre Compétition, Belmondo Racing and Carsport, and won the first two GT-editions of the Spa 24 Hours.

Lister and Ferrari were never far behind though, but in 2003 Swiss squad Freisinger Racing created a surprise by claiming victory with their Porsche 996 GT3-RS. The car was entered in the less powerful N-GT category, but in typical Belgian circumstances – it rained for all but two hours – Stéphane Ortelli, Marc Lieb and Romain Dumas drove a perfect race.

The car that finished second to the Freisinger Porsche claimed the win a year later. Although there was plenty of Italian flavour to that win – a Ferrari entered by Scuderia BMS Italia and driven by Italian drivers Luca Cappellari and Fabrizio Gollin together with Swiss-Italian duo Enzo Calderari and Lilian Bryner (the first woman driver ever to win the Spa 24 Hours) – the victorious 550 Maranello was developed and built by British team Prodrive.

2005 saw the start of a chapter dominated by the Maserati MC12. Although the showroom version of the car had plenty of characteristics of a prototype racing car, the MC12 complied perfectly with the GT1-rules of the time. Between 2005 and 2008 the Trident proved to be victorious three times, always in the colours of the German Vitaphone team. Team owner Michael Bartels and Eric van de Poele were at the wheel for all three wins, making the Belgian the first driver to win the Belgian endurance classic five times. ‘Tintin’ van de Poele’s first two wins dated back to the touring car era, in 1987 (the year in which ‘vdP’ also took the DTM title) and 1998, both on BMW. His record of five wins in Spa still stands.

Maserati may have taken the most wins during those early GT years, they were not without competition. The Aston Martin DBR9 came close to winning the 2006 edition, but had to concede the lead with less than an hour to go. The Corvette C6R proved to be more successful in their quest to beat the MC12. Both in 2006 and 2009 the American machine crossed the line in first, both times with Dutchman Mike Hezemans as one of the drivers. His father, Toine, had won the Spa 24 Hours more than 30 years earlier, in 1973 to be exact.

As 2010 saw the GT1-category switch its focus to the sprint races of the FIA GT1 World Championship, the Spa 24 Hours was no longer a championship race, but was given the title of “Coupe d’Europe FIA GT2”. It catered for four classes: GT2, GT3 and GT National, while the budding GT4 category made a first appearance as well, an initial step towards becoming the popular GT category it currently is. GT3 – a category which made its debut in the 2008 edition – was the largest group that year, with 21 entries. Among them the single Mosler MT900R and three Ford GT had the popular vote, especially since two of the latter were entered by the Charleroi-based Marc VDS Racing team.

One hour before the end of the 2010 race BMW looks set for a 22nd win, but with forty minutes to go the leading M3 suffered a steering arm failure, handing the win to the Porsche of Bergmeister, Ragginger, Henzler and Dumas. For the latter it was the second important win in six weeks, having claimed victory in Le Mans as well.

In 2011, the Total 24 Hours of Spa became the blue riband event of the new Blancpain Endurance Series. Created by the SRO Motorsports Group, this championship is reserved for GT3 cars, a category enjoying ever increasing popularity with drivers, teams and manufacturers. With double points awarded at Spa, the race soon becomes the highlight of the Championship, and a vital step towards the title. No fewer than thirteen brands were represented on the grid of the 2011 edition, with rare machinery as the impressive Ford Mustang FR500 or Chevrolet Corvette taking on the Audi or Ferrari armadas. The number of entrants – on average 43 during the first decade of the 21st  Century – increased significantly, to well over 60 cars. It would be the start of the most successful era of the Belgian endurance classic.

The Audi R8 LMS dominated the first two GT3 editions, with the winning cars entered by Audi Sport Team WRT (2011) and Audi Sport Team Phoenix (2012). But the competition gradually got stronger, and in 2013 a duel between Manthey Porsche and HTP Mercedes-AMG decided the outcome of the race. Eventually the win went to the latter, in a car driven by German trio Maxi Buhk, Maxi Götz and Bernd Schneider. For the 49-year-old it was his second win in Spa… 24 years after his first in 1989.

2014 saw another win for a Team WRT Audi R8, but Vanthoor, Winkelhock and Rast only took the lead with 13 minutes to go. At the line they held a mere 7.7 seconds over the remaining Marc VDS BMW Z4. However, the Belgian BMW squad were to get their revenge a year later.

In 2016, the Total 24 Hours of Spa also became part of the new Intercontinental GT Challenge. With BMW switching to the new M6 GT3, Audi, Mercedes-AMG and Bentley took up the role of favourites. After 23 hours of tough racing the gap between the numbers one and two was only 35 seconds, but a sudden downpour 30 minutes from the end caused havoc in the overall standings. Alex Sims, Philipp Eng and Maxime Martin – with their Rowe Racing BMW always among the frontrunners – came out on top. An emotional win for Martin, treading in the footsteps of father Jean-Michel (winner in 1979-80, 1987 and 1982) and uncle Philippe (winner in 1979-80).

The 2017 edition proved to be a historic one: not only did six cars finish on the lead lap – a record – the lead changed hands 58 times as well. Also a record. In the end the Audi Sport Team Saintéloc R8 of Winkelhock, Haase and Gounon held on to a slender lead of 11 seconds over the Bentley of Soucek, Soulet and Abril.

What will the future bring? The 2018 edition, from 26th to 29th of July, is already certain to have cars from eleven different manufacturers at the start. Promising…