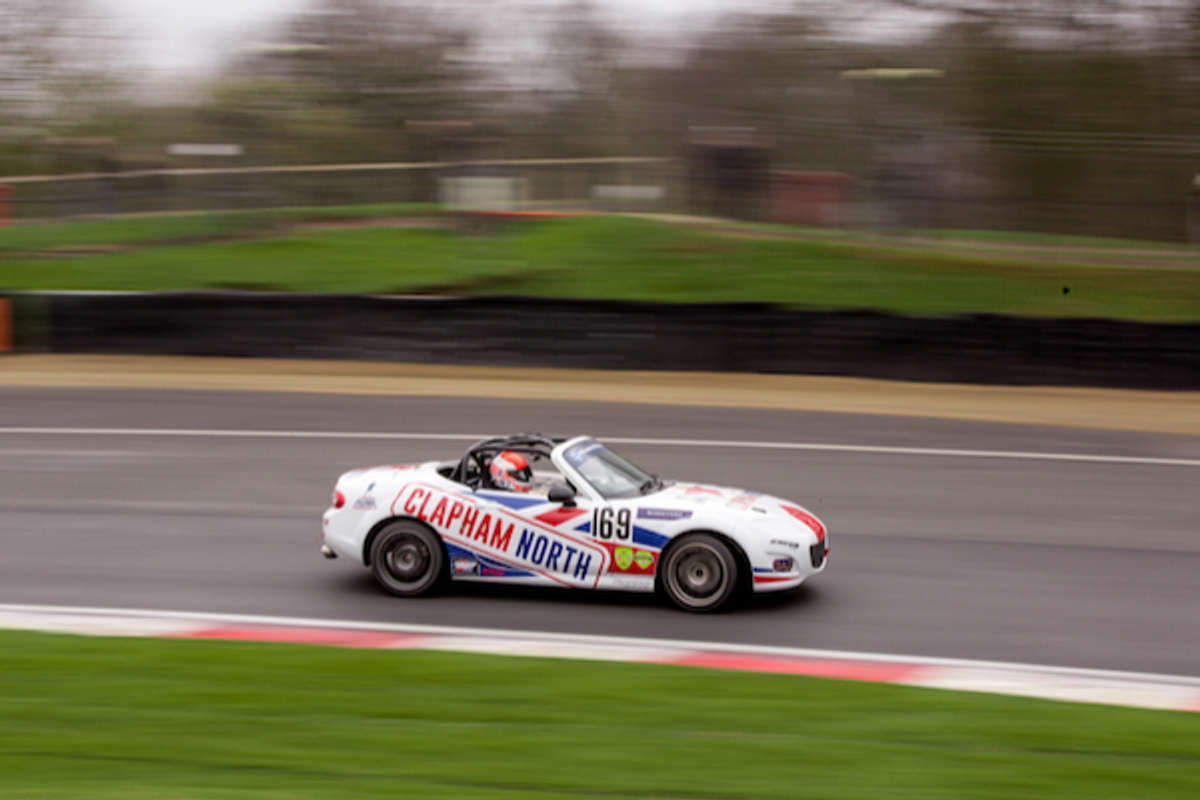 Clapham North sponsored driver George Grant kicked off his 2018 season, taking part in the opening round of the all-new BRSCC Mazda MX5 Super Series, earning an impressive double-podium and a fastest lap in the Masters class.

Competing under the Paul Sheard Racing banner once again, Grant made a strong debut in the maiden Super Series round, racing his new Mk3 MX5 for the first time ahead of the upcoming SuperCup season, which begins at Silverstone this weekend.

The Kingston-on-Thames ace started off the weekend competing in the BRSCC Mazda MX5 Championship, for the Mk1 variant of the car, taking a pair of top-10 finishes in the highly competitive Masters class.

“It was good to return to the MX5 Championship again, after our successful weekend at Donington last season,” Grant said. “It’s a very competitive field, so it was a great to finish inside the top-10 in class, and get more track-time ahead of the other races.”

Grant’s appearance with his new MX5 Mk3 in the Super Series was preceded by a test with reigning BTCC Independents’ Trophy champion Tom Ingram, at a wet Oulton Park to setup the car.

“It was fantastic working with Tom, as not only does he know how to drive, but he also gives great feedback,” recalls Grant. “When he got in the car, he knew exactly how to improve it, and when I got behind the wheel it felt phenomenal immediately, giving me lots of confidence.”

With the testing mileage under his belt, Grant put in a solid qualifying performance on a damp Brands Hatch Indy Circuit, finishing eighth overall, and fourth in the Masters class.

“After a short practice session, I went out in the wet for qualifying, and put in a fairly careful lap, and to my surprise I was eighth,” explained Grant. “Because it was damp I didn’t push too hard, but only afterwards I realised how close the field was, as I ended up just 1.3 seconds off the overall pole.”

In the first Super Series race, Grant made a lightning start, jumping up to sixth, and staying with the lead group throughout the race, also taking a Masters class podium with third.

“Not only was I really happy with the result of race one, but the fact I kept with the leaders all the way through was a really satisfying achievement in such a quality field.”

Grant continued his fine form into race two, battling his way to another third place in class, setting the fastest lap of the Masters runners along the way.

“For the second race I made another good start, troubling the guys ahead of me, even getting up to fifth briefly. I settled into a rhythm, and setting the fastest Masters lap was a nice surprise too.”

In the final race, Grant’s run of strong finishes was halted by a mechanical problem on the second lap, which ended his weekend early.

“For the third race I made another quick start, keeping up with the leading group, so it was looking good.” Grant remembers. “But as I came out of Druids for the second time, an overheating problem caused hot water and steam to start filling the cockpit. It was then impossible to continue, so it was safer to stop and save the car from further damage, it was a real shame not to finish.

“Overall, my experience in the Super Series was extremely valuable and it’s another championship that offers drivers the chance to have a bit of fun, so hats off to the BRSCC for doing a great job.

“It was a highly productive weekend, and I’m looking forward getting back on-track in the SuperCup this weekend!”

Coming Home:
Haig Housing’s latest fundraising campaign, Coming Home, offers a wide range of housing assistance and options for ex-Service personnel and their families. These specially adapted homes have been tailored to suit the needs of those in desperate need of housing following a traumatic or life-changing injury.

“Our task is to fix up these brave young men and women so that they are capable of leading the rest of their lives,” explains Help for Heroes founder Bryn Parry, who fully supports the campaign. “That’s where Coming Home can help. They provide them with somewhere appropriate and decent to live.”

Coming Home: taking over where Help for Heroes finishes
Haig Housing, along with Combat Stress, is a strategic partner of Help for Heroes. As such, the charity dedicated to helping those wounded in British conflicts looks to Haig Housing for support after their work is done. As specialists in their field, Haig Housing is the ideal candidate to provide assistance in housing the serving and ex-Service personnel in specially adapted homes. With many costing somewhere between £150,000 and £300,000, their work relies on donations from the general public.