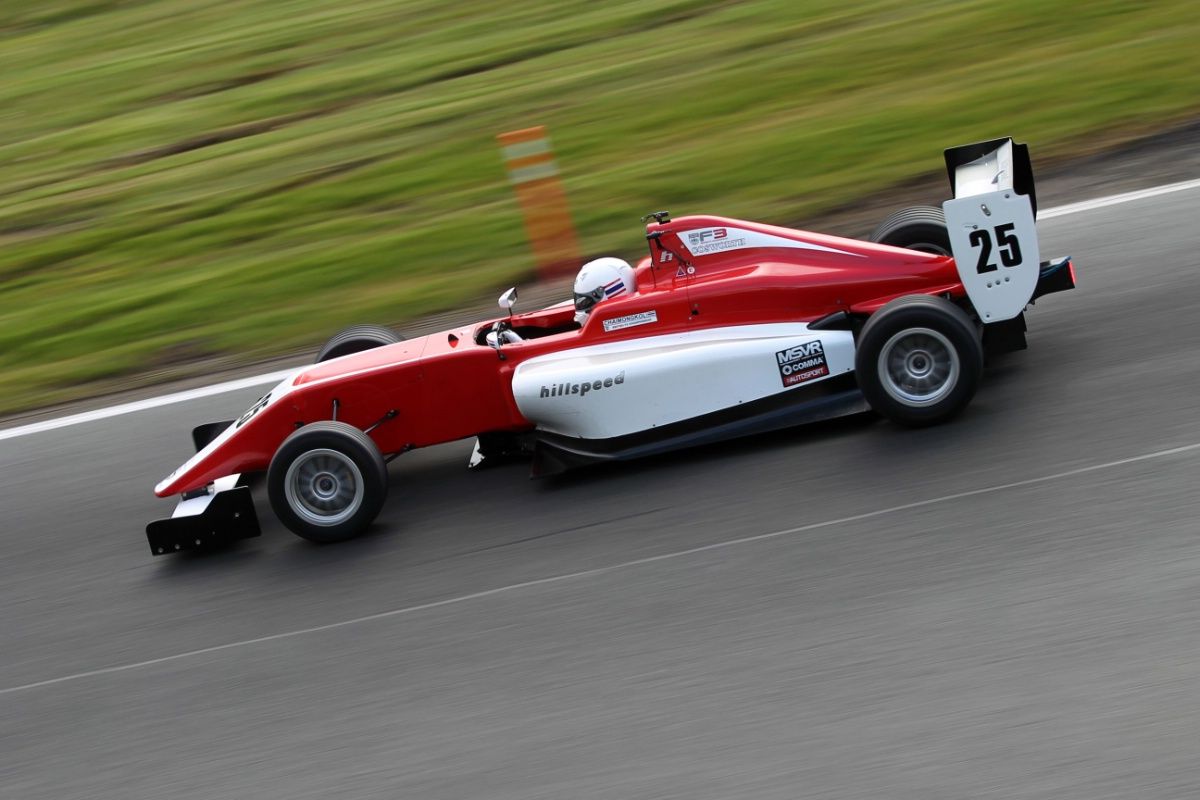 Completing the Derbyshire squad’s three-car entry, 19-year-old Chaimongkol made an impressive start to his first full campaign in F3 with a timesheet-topping performance at the Cheshire track during pre-event testing yesterday and is now relishing the opening three rounds.

Having built a strong relationship with Hillspeed over the past couple of years, initially testing with the team and then making his British F3 debut during the 2016 Autumn Trophy, the Thai youngster now turns his full attention to F3 having contested selected races in Formula 4 in Asia last year.

“I’m really excited to be joining the Hillspeed team for the full BRDC British F3 season”, commented Cutter, “I’ve been driving with them for a while now and they’ve really helped my development. I think my pace is now very strong and I’m ready to challenge in British F3 this season. I can’t wait to get on the grid this weekend.”

In yesterday’s test at Oulton, Chaimongkol turned heads during the weather-affected first session by heading the times and on combined laps he was little more than a second shy of the outright pace from Thursday and Friday’s testing.

His motor racing career began in karting and in 2011 ‘Cutter’ won his first title, the 125 Junior Open Asian Karting Open Championship, as well as becoming runner-up of the Mini class in ROK Cup International. Graduating into the WSK Euro Series, Chaimongkol gained further experience in the CIK-FIA European and World Championships before debuting in cars in 2016 with Hillspeed.

After ending the BRDC British Formula 3 Autumn Trophy that year in 10th position overall, despite contesting just three races, the Thai driver went on to race in half a dozen rounds of the Formula 4 South East Asia Championship last year where he attained four top six finishes.

Delighted to complete the full-season signing of ‘Cutter’ on the eve of the new season, Hillspeed team principal Richard Ollerenshaw has been highly impressed with the teenager’s development over the last couple of years and believes he is ready to mount a strong 2018 challenge.

“We are really happy to get Cutter in our third car for the full season”, he commented, “We’ve got to know him very well and he’s shown really strong progress, especially in the last few weeks. It goes without saying, we were very impressed with his performance in Friday’s test in tricky conditions.

“We’re equally pleased to complete our capacity line-up for the 2018 season. For Oulton we have two cars on the grid, for Cutter and Ben Hurst, but from Rockingham onwards Jusuf Owega will be joining us too. He isn’t 16, the minimum age to be able to race in British F3, until after this weekend’s rounds at Oulton. Hopefully Cutter and Ben will get the year off to a strong start.”

Qualifying for the opening event of the British F3 season will get underway at 11.10 this morning, Saturday, 31st March, with round one following at 15.20. Round two is scheduled to start at 09.50 on Easter Monday, 2nd April, with round three beginning at 14.40.