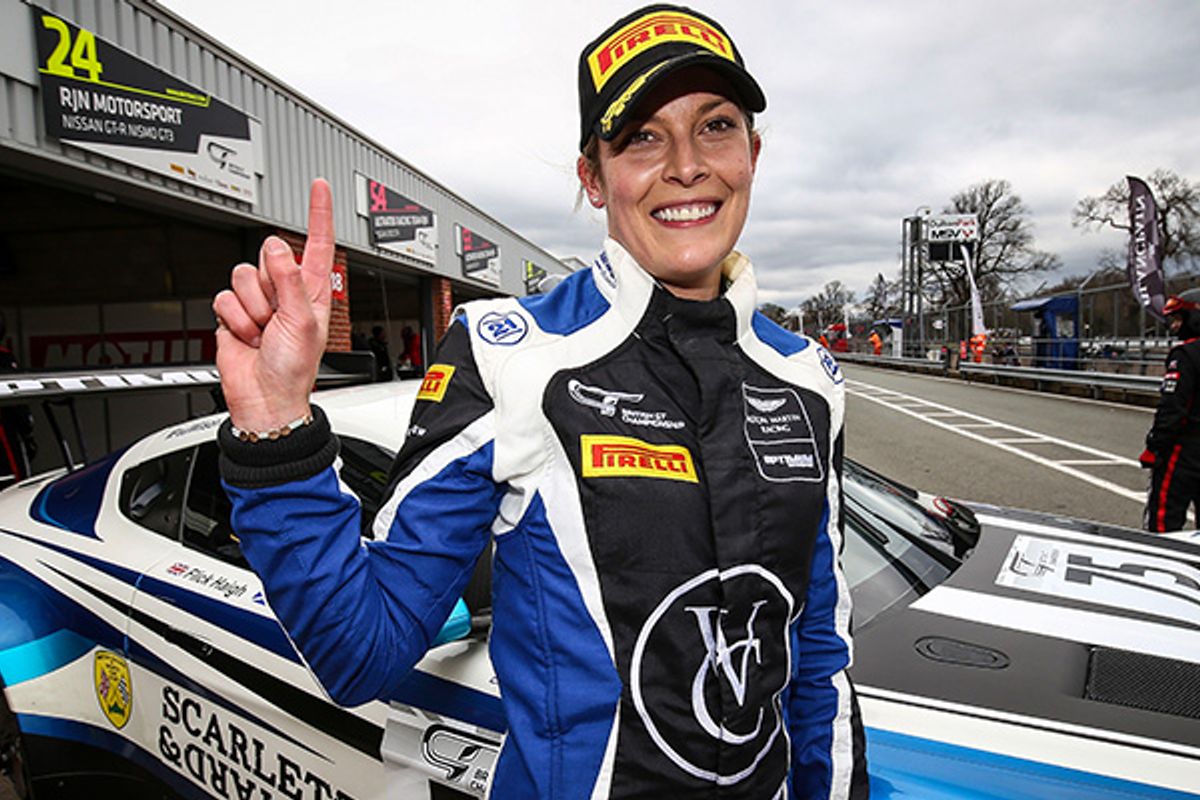 Meanwhile, debutants Equipe Verschuur set the fastest times in both GT4 segments but will start from the back on Monday after a mistake saw Finlay Hutchison and Daniel Mckay take part in the wrong qualifying sessions. Callum Pointon and Scott Malvern therefore start from pole in races one and two, respectively.

Parfitt Jnr’s Team Parker Racing Bentley set the pace initially but was beaten to top-spot by Haigh’s Aston Martin, which set a best lap of 1m34.769s. That was 0.130s faster than the Continental GT3, which finished two tenths up on Team Parker’s second entry driven by Ian Loggie.

Phil Keen set a new British GT3 qualifying lap record in the second of the afternoon’s senior class sessions to claim pole for Monday’s second race ahead of Jonny Adam and Marco Sorensen.

The same Barwell Lamborghini had topped final practice earlier in the day and made good on that promise by lapping in 1m32.869s. That was a tenth under Seb Morris’ previous benchmark and ultimately 0.159s faster than Adam, who secured Optimum’s second front row of the weekend.

The Scot’s AMR factory counterpart Sorensen was just 0.009s further back in the first of TF Sport’s Aston Martins, while the second – driven by Nicki Thiim – was another half-tenth behind.

Darren Turner, Patrick Kujala and Maxime Martin completed a top-nine covered by a second, while Jonny Cocker bounced back from an accident in final practice to seal 10th after Barwell rebuilt their Lamborghini between sessions.

Championship regulations require teams to nominate the drivers that will contest each qualifying segment in advance. Hutchison was scheduled to take part in the second session but was instead aboard his McLaren for the first 10-minute run, ensuring that he and co-driver Daniel Mckay forfeited their pole positions.

Instead it was Pointon, who originally qualified 0.2s shy of Hutchison, that took pole on his first British GT appearance with reigning class champions HHC Motorsport. His best of 1m42.919s was four tenths quicker than Tolman Motorsport’s fellow debutant Michael O’Brien and Ricky Collard, who is standing in for Century Motorsport’s designated full-season driver Aleksander Schjerpen this weekend.

Both BMW M4s line-up on row two thanks to Ben Tuck, who qualified just 0.022s behind Collard, while Academy Motorsport’s Will Moore and the second of Tolman’s Silver Cup McLarens driven by Lewis Proctor start fifth and sixth.

The same fate that befell Hutchison also ensured that Equipe Verschuur co-driver Daniel Mckay lost his pole position post-session to Scott Malvern, who instead topped qualifying for the first time in his British GT career.

The Team Parker Racing Mercedes-AMG had been just 0.052s behind Mckay in the provisional results thanks to its 1m42.394 but ended up sharing the front row with HHC Motorsport’s Will Burns after the latter lapped 0.112s slower aboard his Ginetta.

Jack Mitchell gave the #43 BMW its second third place of the day by beating HHC’s other Ginetta driven by Patrik Matthiesen and the UltraTek Racing Nissan of Martin Plowman, while Track-Club’s Ben Barnicoat was the first of McLaren’s classified entries in sixth.

Flick Haigh, #75 Optimum Motorsport Aston Martin V12 Vantage GT3: “Yeah, it’s fantastic! But also gives us a lot of confidence going into Monday’s races. It’s supposed to be wet so we were focused on starting as near to the front as possible. Pole was just a bonus! The Aston’s very balanced in the wet and we’ve also done a lot of wet running during testing, so we’re prepared for whatever the weather throws at us. The hard work definitely starts on Monday.”

Phil Keen, #33 Barwell Motorsport Lamborghini Huracan GT3: “Barwell have done a good job and Oulton is one of our better circuits, so we’re pleased with pole. There’s some proper drivers out there but it’s no tougher than last year – Jonny Adam’s no slouch and will be as tough to beat as always. But the more rain the better!”

Scott Malvern, #66 Team Parker Racing Mercedes-AMG GT4: “Qualifying went brilliantly. For our first time out in the new car we’re right on target. Nick did a brilliant job in his session and was exactly where he wanted to be for the first run, and for me it’s great to finally show my pace in a field as strong as this, and I think we’ll only get stronger as the year goes on. Technically this track isn’t the best for the Mercedes; it’s more of a Ginetta-friendly place. I lost a few tenths in traffic at the start of my best lap, but kept my foot in and it all came good. Now on to the hard work on Monday.”

LIVE COVERAGE
Both of Monday’s 60-minute races will be streamed live on the championship’s Facebook page and website, as well SRO’s GT World Youtube channel. But remember: nothing beats actually being there! Discounted tickets can still be purchased in advance until midday Wednesday, while children aged 13 and under can attend for free all weekend. Visit www.oultonpark.co.uk for details.

Jonathan Wells, Pirelli UK motorsport manager: “This promises to be another interesting season in the British GT Championship, with the addition of some exciting new cars and drivers. For the GT3 class we are supplying an updated tyre which is an evolution of last year’s product and, like our GT4 tyre, is designed to work equally well on a wide range of different cars. It also has to perform well across the variety of different circuits we have on the British GT calendar. Oulton Park is quite demanding on tyres, with several high inputs of lateral force in the many quick corners, as well as heavy braking and traction points through the chicanes.”

All Silver Cup-entered GT4 cars must serve an additional 12sec

Pit window open between minutes 25 and 35