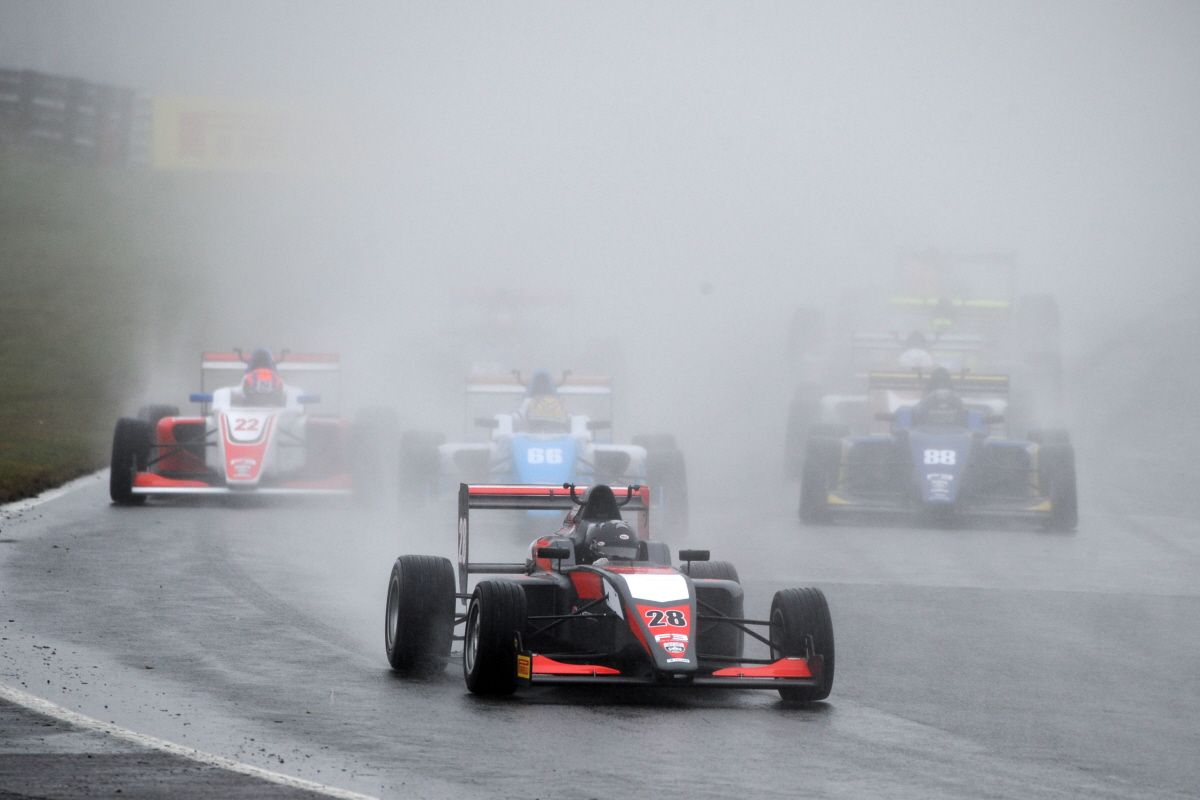 Swedan's Linus Lundqvist made a dream start to the 2018 BRDC British Formula 3 Championship season for Double R Racing at Oulton Park over the Easter weekend, with a fantastic victory during the opening race of the campaign – ending the event second in the standings.

Dedicating his round one success, the 18-year-old’s first in F3, to the memory of Double R race engineer JJ Wilson who tragically lost his life in February, Lundqvist went on to add sixth in a red flag shortened second race and fifth in the third contest to cap a strong weekend at the Cheshire venue.

India’s Krishnaraaj Mahadik posted a best finish of fifth position from the season-opening event in round one, and also challenged for the podium in race two, while Singaporean racer Pavan Ravishankar departed Oulton Park with a best result of 12th position in the third and final contest.

“It’s great to start the year off with a win and a lovely touch by Linus to dedicate it to JJ – we all miss him terribly, he’ll always be part of Double R”, said an emotional Anthony ‘Boyo’ Hieatt, Double R team principal, “Linus did a great job in qualifying and the first race, it’s been a strong start for him.

“Krish did well in the first two races, in the second one he was having a great run but a slightly over-optimistic move into Old Hall for third didn’t work unfortunately – he’d had a mega drive through the field though. Pavan gained some good experience in very difficult conditions through the weekend, which will stand him in good stead, so now we’re all looking forward to Rockingham.”

During the official pre-event test on Good Friday, 30th March, which was impacted by wet-weather, Lundqvist ended the day fourth quickest – just 0.2 seconds shy of the top of the times – while Mahadik was sixth fastest and Ravishankar rounded out the top 15.

Qualifying on Saturday, 31st March, began on a damp track but all competitors chose to run with slick Pirelli tyres, knowing the circuit would improve throughout. Into the last few minutes Lundqvist held provisional pole position for Double R, but eventually ended the session second fastest.

Mahadik secured fourth on the grid for the weekend’s opening race on Saturday afternoon, roughly 0.4 seconds shy of his team-mate’s best, while Ravishankar ended qualifying 14th on the times for the Surrey squad.

Lundqvist enjoyed the best of the start to round one, surging into the lead, and he never looked back on his way to a fantastic, if pressure-filled, maiden British F3 victory. Opening a healthy gap on lap one, racing then fell under Safety Car conditions on the second tour after an incident at the chicane involving Mahadik and Clement Novalak.

Novalak ran side-by-side with the Double R driver into Hislops and as Novalak went over the kerbs, he made contact with Mahadik. Although delayed after being forced across the grass, Mahadik recovered in fifth place while team-mate Ravishankar ended the opening lap in 13th spot.

Racing resumed on lap four and Lundqvist managed to control everything at the front to win his first F3 race by just 0.3 seconds. Mahadik held fifth position for the duration, a strong start to 2018, with Ravishankar also staying in the same place race-long, 13th position.

Following a day of rest on Easter Sunday, the British F3 competitors were back in action on Easter Monday, 2nd April, with a very wet track awaiting them. With the championship operating a fully reversed grid this season for the second race of any given weekend, Lundqvist had to line-up in 16th position with Mahadik 12th and Ravishankar the highest starting Double R racer in fourth.

Mahadik and Lundqvist reveled in the spray and slippery conditions at the start of race two, with the Indian driver leaping up from 12th into the top six on lap one and Lundqvist scything his way through into seventh from 16th on the grid – sensational driving from both.

On lap three Mahadik moved into fifth ahead of Kush Maini while Lundqvist continued to catch the group ahead, although the Swede’s progress was halted after an unfortunate moment on the subsequent lap.

The first of two Safety Car periods was called on lap seven, required when Ravishankar became stranded after an excursion at Cascades while running in 12th place, and with a moment for Wing Hoong Chia prior to the appearance of the Safety Car Mahadik was able to climb into the top four.

At the re-start a lap later, Mahadik was right behind the top three over the line and he boldly went for third place into Old Hall but an unfortunate spin followed and his race came to a frustrating end shortly after.

Lundqvist, therefore, was the last of the remaining Double R drivers in the upper order and after a second Safety Car and subsequent red flag stoppage he ended the contest sixth. Ravishankar, meanwhile, did manage to return to the track and ended the race in 14th position.

Round three also took place on a wet track, with more rain falling over Oulton Park, and Lundqvist made a great start from second on the grid – challenging for the lead into Old Hall before having to tuck back in behind the pole starter.

Into the chicane, though, a bid for second from Tom Gamble meant Lundqvist had no option but take to the grass and he rejoined down in fourth. Another unfortunate moment during the final quarter of the race meant Lundqvist slipped to fifth, where he remained to the flag on lap 12.

Mahadik started seventh on the grid and climbed into sixth on the opening lap, before being edged back a place on the fourth tour. Then shuffled back two more spots on lap six, the Indian had to settle for ninth in the weekend’s finale. Ravishankar, meanwhile, was 13th at the start and although dropping to 14th midway through he eventually concluded the race inside the top 12.

Rounds four, five and six of the BRDC British Formula 3 Championship season will take place four weeks from now, over the weekend 28th/29th April, at Rockingham in Northamptonshire.