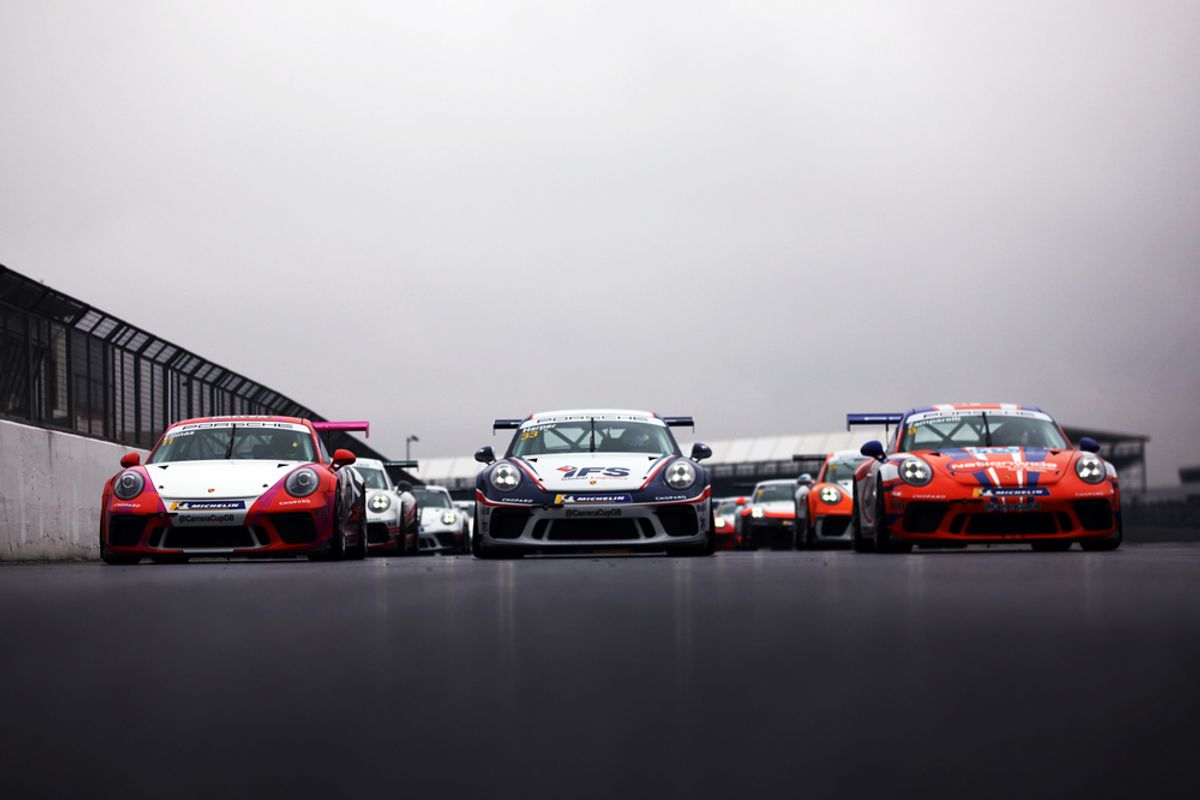 2018 season ushers in a new generation of car and drivers

Entering its 16th season, the fastest single marque GT racing championship in the UK, Porsche Carrera Cup GB, is set to deliver a battle between an even split of promising newcomers and seasoned campaigners. Getting underway at Brands Hatch on 7 / 8 April, a grid of 22 second-generation 911 ‘Type 991’ GT3 Cup cars will compete as part of a refreshed format across 16 rounds and eight race weekends, including one weekend in support of the European Le Mans Series at Monza, Italy.

Leading the returnees in the charge for the overall and Pro category title will be Dino Zamparelli (Redline Racing). Eight-times a race winner and twice runner up in the overall standings, after tying on points with champion Charlie Eastwood last season, for 2018 Zamparelli moves to the championship’s most successful team, Redline Racing. However, he will face strong opposition from a former team mate, 2017 Rookie champion Tio Ellinas, who moves to Slidesports as the team enters its second season. Despite a run of mid-season bad luck, former GP2 racer Ellinas took five podiums in his debut year and finished 2017 with a run of two thirds and two seconds.

Looking to take the fight to his former team mates will be Lewis Plato (JTR). After four podiums with JTR in 2017, Plato is joined at the team by Tom Wrigley. Both former top Rookies, now in their third and second seasons respectively, will be focused on maintaining the momentum of JTR’s success in the team’s first season of sports car racing. Despite their experience, this established quartet will have to watch for the third driver in the JTR line-up.

17-year-old Dan Harper from Belfast overcame tough competition, aged just 16 at the time, to earn a place on the grid as the Porsche GB 2018 / 2019 Junior. Harper joins Porsche Carrera Cup GB and JTR from the Ginetta Junior championship, where he clinched the title of Rookie champion in 2016 before accruing seven wins and six fastest laps in 2017. Harper’s natural speed and ability to adapt to the rear-engined 911 GT3 Cup marked him out at the Junior Shootout in November last year and, despite his years, success in quad bikes, karts, rallying, rallycross and circuit racing make him an exciting prospect for 2018. Due to Harper’s position as the Porsche GB Junior, he is excluded from the Rookie title fight despite technically meeting the criteria.

Fellow young gun George Gamble (Team Parker Racing) was one also of the five finalists in the latest Porsche Carrera Cup GB Junior Shootout, and enters the championship having previously competed as part of the TOCA package, most recently in the Ginetta GT4 Supercup where he finished third in 2017. Aside from contesting for the overall title, Gamble is one of only two Rookies to be part of the Pro category.

The second Pro category Rookie is a veteran racer and hero of the British Touring Car Championship (BTCC). Continuing a tradition led by the most successful driver in Porsche Carrera Cup GB history, 1992 BTCC champion Tim Harvey with 36 outright wins, 2002 Production Class champion James Kaye will be joining the championship for 2018 with GT Marques.

Offsetting, if only in part, the advantage of the returning drivers is the second-generation ‘Type 991’ 911 GT3 Cup, new to the championship for 2018. A 4.0-litre direct injection flat-six engine produces 485 hp, an increase of 25 hp, and is accompanied by enhancements to aerodynamics and safety. Furthermore, race format changes for 2018, developed in conjunction with teams and drivers to increase the already high level of competition, will include the adoption of reverse grids in race two for the top six drivers overall from race one, two standing starts, and a new championship points structure (full summary below).

Renamed for 2018, the Pro-Am category – formerly Pro-Am1 – features an equally exciting mix of talented newcomers and experienced chargers to create the prospect of a very competitive category. Justin Sherwood (Team Parker Racing) will be looking to continue the momentum of a successful 2017 campaign which netted 12 podiums and three class victories. After ending the year second in the category standings, Sherwood will be pushing for a repeat of his 2014 title.

Jamie Orton previously undertook a partial season in the Pro category, and for 2018 returns to complete a full season in the Pro-Am category as the fourth entrant for JTR. With a top placing overall of sixth in 2017, Orton will undoubtedly be a force to be reckoned with and one of the category favourites. Experienced series regular, multiple category race winner and G-Cat Racing team manager Greg Caton also returns to the grid for 2018, and completes the trio of experienced contenders.

Returning to British motorsport comes 20-year-old Welshman Rory Collingbourne. Having previously competed for two seasons as part of the TOCA package in the Renault UK Clio Cup, Rookie Collingbourne will compete with Welch Motorsport alongside team manager Dan Welch. A BTCC regular between 2011 and 2016, Dan is the son of former rallycross driver John Welch, and will be joining the Am category.

In addition, three more Rookies will compete in the Pro-Am category in 2018. Esmee Hawkey is the third Porsche Carrera Cup GB Junior Shootout finalist to enter for 2018, after successfully competing a Cayman GT4 Clubsport in the GT Cup series for two seasons. The 20-year-old brings with her the returning GT Marques team, multiple race winners who were last a part of the paddock in 2016.

Seb Perez, a former team mate of George Gamble, continues the partnership as both drivers line up alongside each other at Amigos Team Parker, albeit in different categories. Another young gun taking to the category is Dan Vaughan. The 21-year-old Rookie has competed in various karting series, but will be looking to make his mark in the championship with Motorbase. Best known for their role over recent years in the BTCC, Motorbase took 26 outright wins over their time in Porsche Carrera Cup GB – the third highest of any team – and last ran with the championship in 2012.

Into the Am category, renamed for 2018 from Pro-Am2, comes another equal split of returning and new names. Reigning category champion Shamus Jennings (G-Cat Racing) and runner-up Peter Kyle-Henney (IN2 Racing), who took a record number of category wins in 2017, return to reignite their fierce duel of 2017. The battling duo will be joined by regular podium visitor Iain Dockerill (Asset Advantage Racing), who finished third in the category last season.

Leading the charge of the newcomers is another former BTCC driver. Richard Hawken won his first competitive car race in 1991 and enters the 2018 season as a Rookie with Slidesports. Rookie Fraser Robertson, a regular podium finisher over four seasons in the Am category of the Ginetta GT4 Supercup, joins the championship with Redline Racing. Gary Eastwood (G-Cat Racing) has had extensive experience in motorsport, successfully competing in sportscars and single-seaters, most recently in GT Cup and British GT. Peter Mangion (Team Parker Racing) most recently competed in the AMOC Intermarque championship and has enjoyed success over many seasons of competition which began in earnest back in 2000 with the Caterham Superlight championship.

An intense season of top-class competition in 2017 provided several of the Pro category drivers with an opportunity to progress their careers. Reigning Carrera Cup GB champion, and Porsche GB 2016 / 2018 Junior, Charlie Eastwood will compete at the 24 Hours of Le Mans twice as part of a move to the World Endurance Championship (WEC) in its first ‘super season’. He will run a WEC programme alongside an appearance at the Nurburgring 24 in a Porsche Cayman GT4 Clubsport MR and a campaign in the Blancpain Endurance series.

For the first time in the championship’s history, reverse grids will feature for the second race of each weekend. Following the first race, a number between four and six will be selected at random. This number determines whether the first four, five or six drivers across the line for the first race will have their grid positions reversed for the second. All other competitors will form on the race two grid according to their finishing position in race one. Both races will now feature a standing start.

A new points structure, consistent across all three categories, will be introduced to simplify scoring and support the reverse grid concept. A weighting for Pro category drivers in the first race rewards qualifying performance and partially offsets the penalty for a reverse grid placing in the second. In a similar spirit, drivers in all categories that set the fastest lap during qualifying at each race weekend will be awarded two championship points. An overall points table calculated on the same basis as in 2017 will determine the Team and Rookie championships.

Rounds one and two will take place on Sunday 8 April at 10.00 and 15.40 respectively, with live coverage of round two on ITV4.