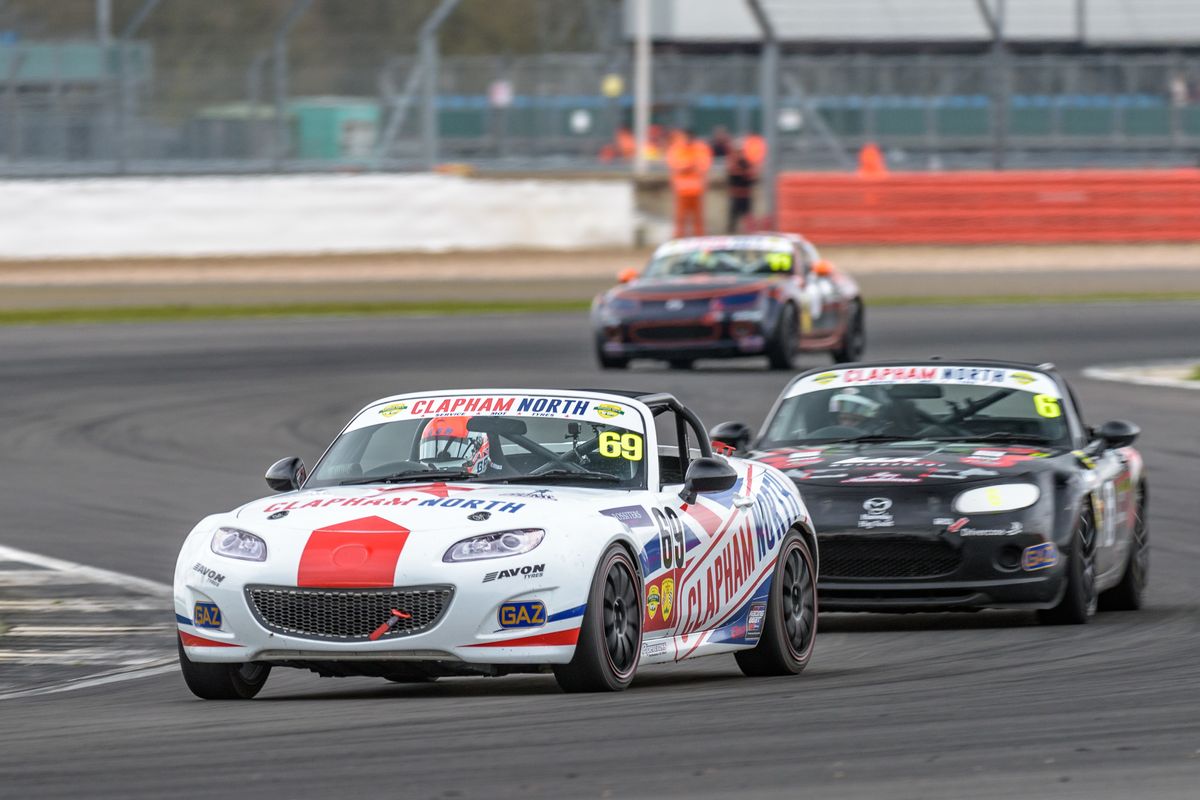 George Grant secured a pair of third place Masters class finishes, in the opening round of the 2018 BRSCC Mazda MX5 SuperCup at Silverstone.

Fresh off of his double-podium finish at Brands Hatch in the inaugural BRSCC Mazda MX5 Super Series last weekend, the Kingston-Upon-Thames racer continued his strong form at the Northamptonshire circuit, despite challenging conditions.

The newly resurfaced Silverstone proved tricky during the rainy practice and qualifying sessions, though Grant acquitted himself well in the wet, setting the fourth-fastest time in the Masters category.

“There was a lot of standing water on some portions of the track during practice and qualifying,” Grant said. “Despite the conditions, I felt very comfortable in the car, which encouraged me to push. The times in qualifying were really close, with 2.5 seconds covering the top-25 cars.”

In the opening race of the weekend, Grant made a quick getaway from his starting position, before having to take avoiding action for an incident ahead, dropping him down the field to a seventh in-class finish.

“In race one I made a cracking start, jumping up three or four places, but when I encountered the spun car in front I lost a lot of momentum, and the field streamed past exiting Maggots. I was a little bit disappointed, but my times after that were good, which encouraged me for the rest of the weekend.”

Starting from fourth in the Masters category, and 23rd overall for race two, Grant made storming progress through the field to come home well inside the top-20, and on the third-step of the podium in class.

“On the drying track in the second race, I was just able to climb the order,” recalls Grant. “I made another fast start, and got stuck into some really close on-track battles, so to finish inside the top-20 of such a competitive field was a really good result.”

In the weekend’s final race, Grant added to his class podium, with another third place in the Masters category, as well as battling for positions in the overall top-15.

“Race three was really good fun, the track had dried out, but it was still very cold which made it slippery. Finishing 17th overall was another strong result, but to come away from the first weekend of the season with two class podiums, has put me in a good position for the rest of the season.

“It was a really thrilling way to get the 2018 SuperCup underway, the racing was as close as ever, and the paddock had a really good feeling about it.

“The extra exposure that the championship is getting through its first online live broadcasting is going to highlight some of the great racing we have, and I’m really looking forward to seeing the series grow further.”

Grant’s next race will see him re-join the BRSCC Mazda MX5 Super Series at Snetterton (14-15 April), before continuing his SuperCup campaign in Scotland at Knockhill (12-13 May).

Coming Home:
Haig Housing’s latest fundraising campaign, Coming Home, offers a wide range of housing assistance and options for ex-Service personnel and their families. These specially adapted homes have been tailored to suit the needs of those in desperate need of housing following a traumatic or life-changing injury.

“Our task is to fix up these brave young men and women so that they are capable of leading the rest of their lives,” explains Help for Heroes founder Bryn Parry, who fully supports the campaign. “That’s where Coming Home can help. They provide them with somewhere appropriate and decent to live.”

Coming Home: taking over where Help for Heroes finishes
Haig Housing, along with Combat Stress, is a strategic partner of Help for Heroes. As such, the charity dedicated to helping those wounded in British conflicts looks to Haig Housing for support after their work is done. As specialists in their field, Haig Housing is the ideal candidate to provide assistance in housing the serving and ex-Service personnel in specially adapted homes. With many costing somewhere between £150,000 and £300,000, their work relies on donations from the general public.

Haig Housing and Coming Home have already provided many badly injured ex-Service men and women with a home for life. Read their stories today and see the contribution your donation could make to others.