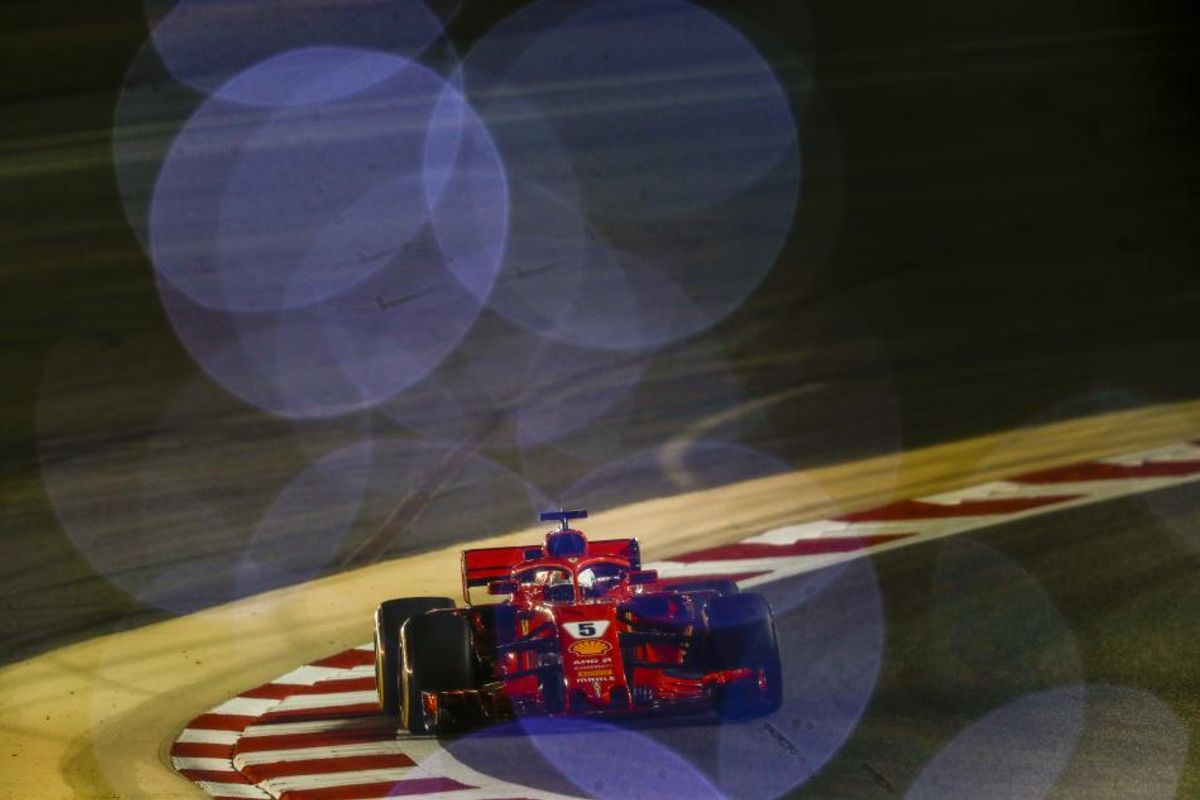 Sebastian Vettel will make his 200th grand prix start from the front of the grid after the Ferrari driver claimed his 51st career pole at the Bahrain International Circuit ahead of team-mate Kimi Raikkonen and Mercedes Valtteri Bottas.

Defending champion Lewis Hamilton finished in fourth place but the Mercedes driver will drop to P9 on the grid due to an unscheduled gearbox change.

Räikkönen set the early pace in Q1, his first flying laps, on soft compound Pirelli tyres, yielding a time of 1:29.951. Ferrari team-mate Vettel slotted into P2 a tenth behind the Finn, and Valtteri Bottas took third place with a lap of 1:29.275.

Fourth place was occupied by Red Bull Racing’s Max Verstappen but after a solid opening flyer it all went wrong for the Dutchman on his next quick lap. He lost control on the exit of Turn 2 and spun off at the following corner. He went nose first into the barriers, causing major damage to the left front of his car and the red flags were quickly shown.

Alonso was the driver to progress, though only by virtue of having set a time of 1:30.530 before Grosjean matched the lap to the thousandth of a second. The Haas driver was left to rue a mistake late in his lap. Had he not erred the Frenchman might have finished the segment closer to seventh-placed team-mate Kevin Magnussen.

At the top of the order the top five drivers remained in the garage for the final runs of Q1 and Räikkönen led the way with his sole flying lap of 1:28.951.

In the first runs of Q2 Vettel got the better of this team-mate for the first time during the weekend, taking P1 with a lap of 1:28.341. Räikkönen slotted into P2 but was dropped down a spot when Hamilton took P2 a tenth off Vettel. Ricciardo found himself fourth ahead of Bottas and surprise package Pierre Gasly continued to shine for Toro Rosso with sixth place, in front of the Renault of Hulkenberg, the Haas of Magnussen, the second Renault of Sainz and tenth-placed Esteban Ocon of Force India.

In the drop zone ahead of the final runs were Sergio Perez, who had complained of a loss of energy on his first run, while P12 man Alonso was followed by team-mate Vandoorne, Toro Rosso’s Brendon Hartley and the unfortunate Verstappen.

And while they shuffled their order, none made it through to Q3 in the end, with Hartley rising to 11th ahead of Perez, Alonso, Vandoorne and Verstappen.

Vettel made the first move in Q3 but while he took P1 with a time of 1:29.196 there was a mistake in the final corner as he went marginally wide and kicked up dust. That allowed Räikkönen to sneak past and the Finn took provisional pole by 0.095s. Hamilton slotted into third, a tenth behind the top two, with Bottas fourth ahead of Ricciardo and Gasly.

There were no errors on Vettel’s second attempt, however, and he rose to the top of the order with a lap of 1:27.958. The German was the only man to dip below the 1m28s mark and he thus took his 51st pole with just over four hundredths of a second ahead of Räikkönen.

It might have been assumed that Hamilton would have a say in how the front of the grid was drawn, but in the end it was team-mate Bottas who took P3 as Hamilton failed to find an improvement.

With the champion set to drop to P9 on the grid due to his gearbox penalty, Ricciardo backed out of his final run, safe in the knowledge that his time was good enough for P5 in the session and P4 on the grid.

Behind them Gasly put in a superb lap to qualify in sixth place ahead of Magnussen, Hulkenberg, Ocon and Sainz.